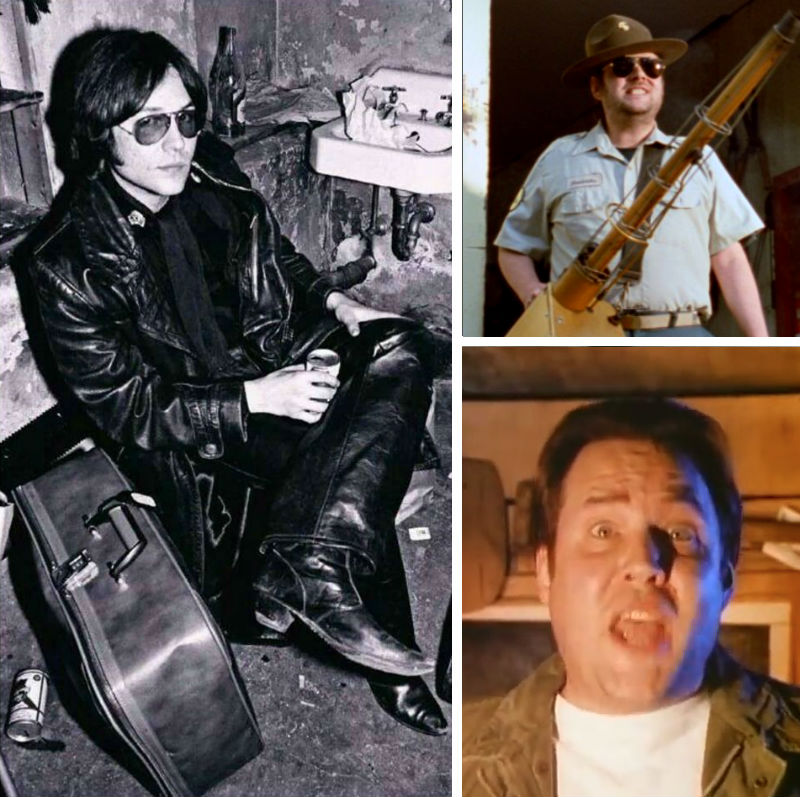 THE CARRIER
Directed by Nathan J. White
A mysterious contagion afflicts a small town, causing infected items to burn the sufferer’s flesh right off the bone. Asheton plays a small role as a local and doesn’t stand out much in this ambitious film that aims for AIDS allegory but is more memorable for featuring an entire cast wrapped in plastic garbage bags (for protection, of course). Also, a lot of cats get killed, so fanciers beware.

FROSTBITER: WRATH OF THE WENDIGO
Directed by Tom Chaney
As a hunter who unleashes the malevolent spirit of the Wendigo upon the earth by shooting a defenseless old man in the woods, Asheton sets the events of this grotesque Evil Dead clone in motion and remains at its center throughout. The filmmakers plunder Native American mythology to power the plot, but Frostbiter’s cultural incorrectness isn’t its only notable feature. The film is overstuffed with elaborate, poorly-executed special effects that never convince but impress nevertheless with dimestore grandiosity. Demon puppets pop out of chili pots, flannel shirts spontaneously combust and for the grand finale, Asheton is disemboweled by a crudely animated clay deer monster.

HELLMASTER
Directed by Douglas Schulze
Allegedly filmed on location in an insane asylum in Pontiac, Hellmaster is another excessive special effects extravaganza delivered on the cheap. Asheton appears briefly, nearly unrecognizable in heavy makeup as the monstrous nun named “Mama Jones,” but the film really belongs to genre film stalwart John Saxon (Nightmare on Elm Street, Enter the Dragon, Tenebrae, etc.) who stars as the titular Master of Hell.

LEGION OF THE NIGHT (aka DEAD CITY)
Directed by Matt Jaissle
Set in a dreary, lawless Detroit of the future, this zero-budget riff on Robocop finds Asheton as a disheveled scientist wreaking revenge on mobsters with a horde of robot/zombie soldiers. After surviving a vicious machine-gun attack within the first ten minutes, Asheton spends the rest of the film on crutches in a filthy lab coat and smudged horn-rims, gesturing with cigarettes and guzzling liquor right from the fifth. “A process to reanimate dead tissue into superhuman condition” is employed to create an army of corpses powered by “synthetic adrenaline,” but this unwholesome endeavor backfires, as one might expect. Grim, violent and joyless, but not without its charms.

MOSQUITO
Directed by Matt Jones
If you are still reading this far, you are about to be rewarded, for Asheton’s final film is easily the best of the lot, a classic creature feature romp executed with wit and energy. A UFO crashes in what appears to be northern Michigan, a mosquito feeds off a dead alien’s corpse, and strange mutations occur. In no time, swarms of mosquitos the size of Great Danes are interrupting picnics and ruining fishing trips. Our hero plays a forest ranger who joins a small band of survivors struggling to reach civilization before they are impaled and sucked dry by the monstrous insects. Asheton gives the best of all his performances in Mosquito. He’s genuinely funny as the film’s nominal comic relief and clearly comfortable before the camera, ripping into action scenes with gusto no matter how fake the rubber bugs look.