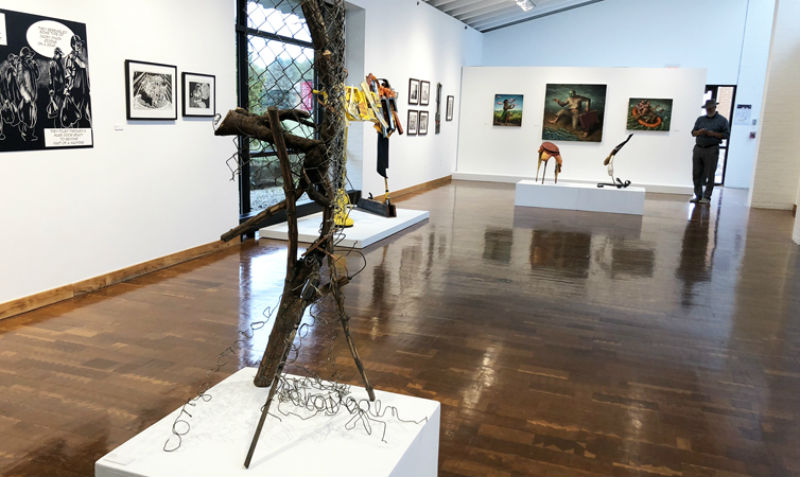 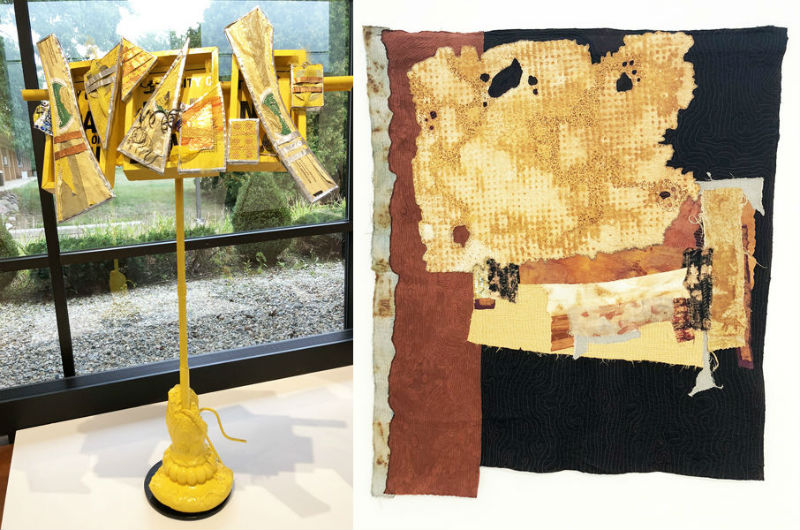 Exhibit A: The City as Material

Carole Harris, the eminent Detroit fiber artist, has contributed several of her heavily distressed, cut, burned and stitched fiber pieces to Textures of Detroit. They represent a sophisticated hybrid of post-minimalist painting and quilt making. Her piece Up Until Now is emblematic of her best work, rich in surface detail, with materials scarred by a history of abuse and reconstruction, a poignant metaphor for resilience and resistance.

Matt Corbin employs color as a unifying element that brings the disparate components of his sculpture into a coherent whole. His mildly comic Kraft-mustard-yellow assemblage Litter in the Art Park slightly resembles a music stand, and the objects attached to the upper part of the sculpture seem, to me, to refer to musical instruments, harmonious and cacophonous all at once. Another highlight from this artist, the shamanic 1-2-3, is a metal structure with fringes of what appear to be black leather upholstery scraps that project a sinister presence.

Ann Smith’s mixed-media constructions spotlight the artist’s interest in the meticulous and unexpected combination of mismatched materials. Her stool-like Friday Barely Arrives features an outer image of ovoid orange and pendulous sacs, but it’s worth getting on hands and knees to enjoy the interior of the piece, where carefully stitched and applied seeds and fibers form a surprising interior. Nearby, her almost accidental-appearing agglomeration of branches and twisted chain links, entitled Exquisite Corpse, calls attention to the surrealist subtext in her compositions. Smith has a particular gift for juxtapositions of natural and industrial elements beautifully crafted and integrated into a satisfying whole that feels very much like Detroit now. 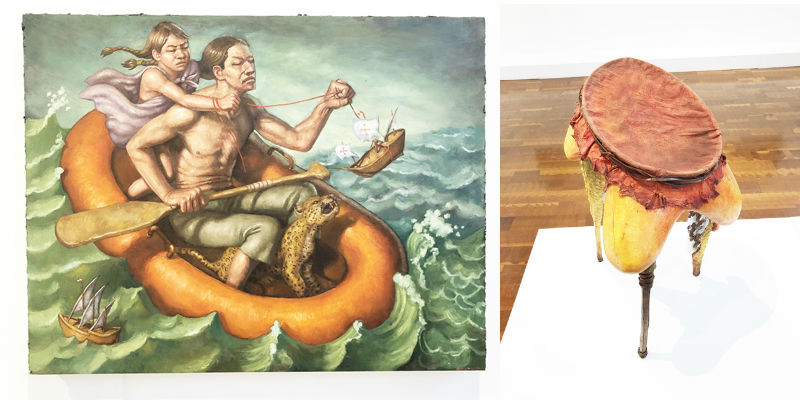 Exhibit B: The City Observed

Roy Feldman’s quiet, lyrical, black-and-white photographs capture private moments in public places through the camera’s lens. Often unobserved, Feldman watches an artist in her studio, a young woman holding up a filmy dress, a museum-goer lost in thought. In another photograph, a young woman facing away from the camera nevertheless has caught the photographer looking at her, her eye reflected in a mirror. In only one image, of an older man, does the subject seem fully aware of the photographer. He returns the camera’s gaze with a deadpan stare, the city street refracted in a storefront window nearby.

Since he retired from his job in an auto plant to become a full-time artist, self-taught printmaker and 2013 Kresge Artist Fellow Carl Wilson continues to explore the intimate narrative potential of relief printing. The linocuts in this exhibit show the influence of his interest in film noir and graphic novels, even as he brings the subjects closer to home.

Peter Bernal is a painter of allegories that combine his personal history in Southwest Detroit with legends of indigenous people and themes of resistance to colonization and exploitation. His paintings share a narrative strategy and the social consciousness of Depression-era WPA painters, which he has fashioned into a powerful and personal visual language addressing contemporary themes.

It seems to me that the job of a curator is to arrange works that resonate and illuminate their relationship to each other and to make an argument for the stated proposition of the exhibition. I was disappointed to find that, rather than offering a coherent curatorial theme, or any textual proposition supporting it, Textures of Detroit provides only an unfocused survey. Certainly, a satisfactory exhibit could have been made with three, or two -- or even one -- of these accomplished Detroit artists. I hope to see that someday soon in Ann Arbor.