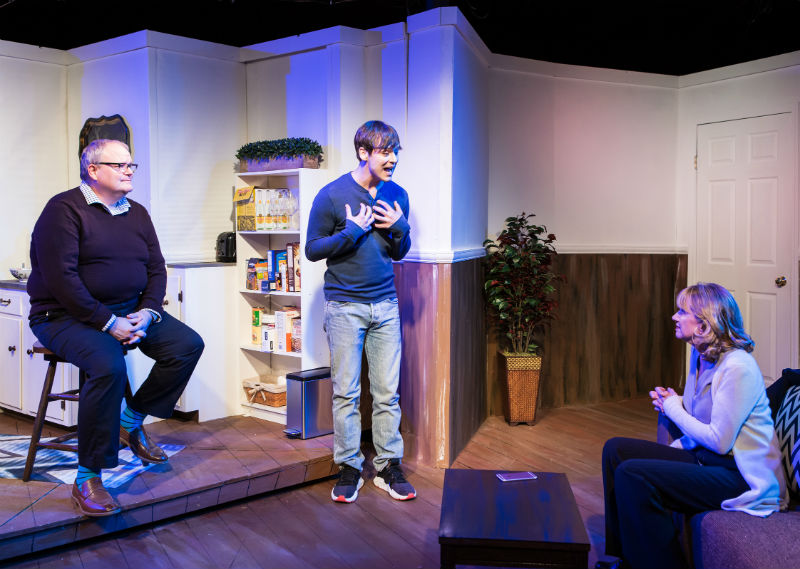 Left to right: Joe Bailey as Bill, Jeremy Kucharek as Charlie, and Diane Hill as Sherri in Admissions by Joshua Harmon at Theatre Nova. Photo by Sean Carter Photography.

Theatre Nova does it again with an outstanding production of a play that is both an intimate family drama and a relevant piece of social commentary.

Joshua Harmon’s Admissions is a precise, nuanced, and often funny take on the affirmative action debate and how it plays out in the real world. As the University of Michigan has long been at the center of the debate on affirmative action, the play has a special interest for Ann Arbor. Harmon doesn’t take sides; instead, he examines the tensions, the presumptions of white privilege and the hypocrisies of those with the best of intentions.

Sherri Rosen-Mason is the admissions officer for Hillcrest, an elite prep school in New Hampshire. Her husband Bill Mason is the school principal. They are white, well educated, politically liberal, and dedicated to making their school more racially and ethnically diverse.

But what happens when their ideals and good intentions suddenly conflict with the ambitions of their talented, intelligent son who wants to go to Yale.

Sherri is struggling to raise the enrollment of minorities at the rural boarding school closer to 20 percent. Bill is strongly supporting the goal.

Their son, Charlie, has been dreaming of Yale for a long time. He’s a top student, an athlete, an assistant editor at the school newspaper. But when Charlie is not immediately accepted but put on deferred status he is enraged. He is especially upset that his best friend, Perry, the son of a biracial father and white mother, has been admitted to Yale.

Charlie complains loudly, profanely, and brilliantly that he’s been discriminated against because he’s a better student and more active than his friend. His liberal parents suggest that he wait and see or perhaps settle for Cornell or Dartmouth -- poor kid.

Director David Wolber has assembled a uniformly excellent cast. He wrings out all the large and small laughs aimed at upper-middle-class pretensions but expertly handles those sudden shifts into lacerating arguments that tear away at long-held assumptions. The small, tight thrust theater is perfect for this kind of intimate family drama, making the audience voyeurs into arguments they may have had in their own homes.

Diane Hill plays Sherri. She’s a take-charge administrator. Hill balances that determined, liberal-minded admissions officer with the tiger mom who wants to give her son all the opportunities she can. Hill is fierce, but she also has a way with a witty line and distressed look. She’s especially funny as she contemplates her son’s suggestion that maybe he could go to community college (oh the horror).

Joe Bailey plays big-hearted Bill Mason, a former teacher moved to the top spot. He’s funny and open-minded -- or so it seems at first. Bailey gets to make the liberal argument for affirmative action and against white privilege. His voice is strong with tightly restrained anger at his son’s never before expressed racial animosity. His stunned look after an argument with his son is especially moving.

Jeremy Kucharek plays Charlie. Charlie is, as his father says, a spoiled brat. He’s been brought up to think he can have what he wants. He has strong ambitions, but he also has strong resentments. Kucharek has the best scene in the play, an extended rant in which he tells his parents that he let it all come out in a speech before his classmates, taking aim at the Hispanic, African-American, and Asian-American students with sharp barbs and defense of white culture and his own part-Jewish heritage. Kurcharek snaps off this speech with sharp wit, energetic movement, and deep anger. He is excellent throughout, as Charlie later makes a case for self-sacrifice in support of more diversity. Kucharek’s articulate, bright, opinionated teen with a vulgar mouth and a rapid mind is right on target.

Charlie has a change of heart as the school year goes along and has an idea to promote diversity that mortifies and alienates his parents (this includes the suggestion that he could attend community college). The tables turn. Sherrie becomes a mother out to save her son from sinking into the world of public education. Bill has argued against white privilege but wants his son to use his connections to stay privileged.

Harmon offers other perspectives in two other important characters.

Cynthia Szczesny plays Roberta, from the development department. She’s an older employee, daughter of a former faculty member, and a former student. She’s a bit ditzy, frazzled. Sherri wants her to add more pictures of people of color and Roberta can’t understand what it is she wants and why. She’s a bit of a racist but she doesn’t think so, she just doesn’t see color she says. Szczesny is hilarious and her timing is excellent as she slips into those telltale comments that alert you that she isn’t in step with the changing world. Her discussion of trying to get a picture of a mixed group in the lunchroom says it all.

Sarah Burcon plays Ginnie, mother of Charlie’s friend Perry and wife of a biracial husband who teaches at the school. Burcon defends her son from the idea being mixed race got him into Yale. She makes it clear, also, that minority students at the mostly white Hillcrest aren’t exactly thrilled to be there.

This is strong theater, engaging a touchy issue with humor, nuance, and tense interaction. With the recent scandal involving ambitious parents bribing school officials to advance their children to elite status and new affirmative action suits moving through the courts, it couldn’t be more timely.