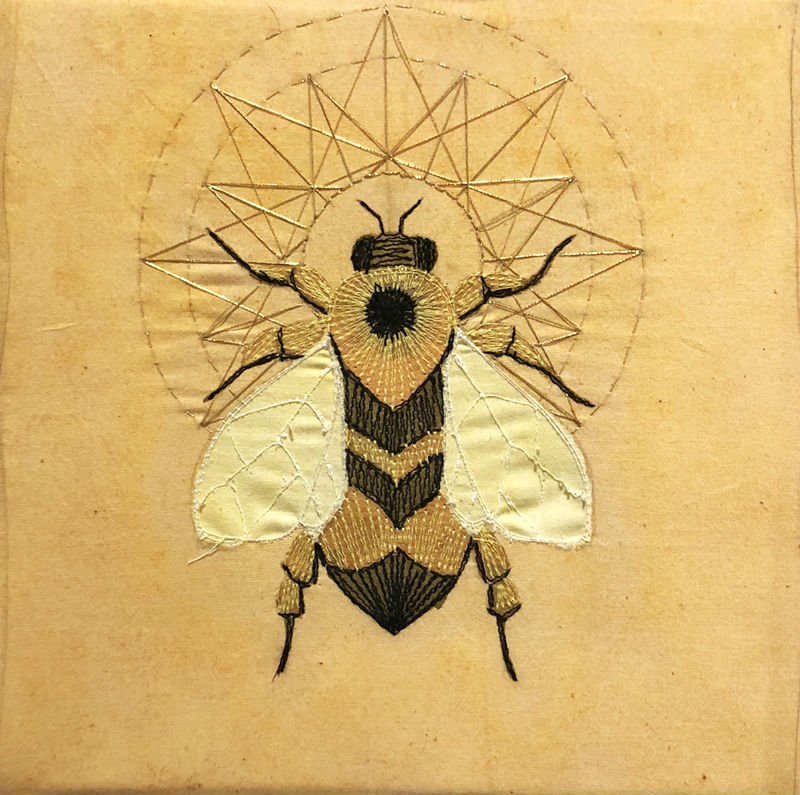 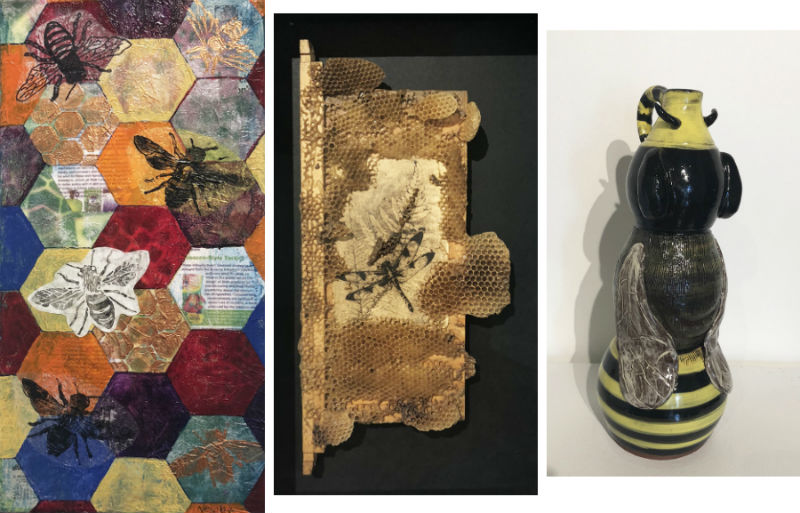 Artist and beekeeper Ladislav Hanka collaborates with honeybees to create artworks that draw attention to the symbiotic relationship between human and insect. In Dragonfly: Predator of Bees Enshrined in Beeswax, he has created a drypoint etching and attached it to a frame, which he then introduces into a living hive, allowing the bees to add their commentary in the form of honeycomb. In his artist’s statement, Hanka laments his impotence as an individual to affect policy and societal changes to protect the environment. He points out that he is neither a politician nor a scientist. But he is an artist and a beekeeper, and his knowledge of the natural world and his familiarity with the lives of his bees gives his work a unique and poignant intimacy.

Speaking of collaboration, the poster Detroit Hives demonstrates the cooperative relationship of a Detroit artist, an urban beekeeping operation and a well-known fine art press. Louise “Ouizi” Jones is mostly known for her large-scale floral murals, which can be seen in Detroit, Chicago, and Nashville, among many other locales. Here, she works in cooperation with Lee Marchalonis of the well-known Detroit Signal Return Press to support the urban beekeeping non-profit, Detroit Hives. The mission of the organization is to “transform vacant lots into bee farms for the conservation of honeybees, to help spread bee awareness, and to educate our communities and local schools about bees and their contribution to our environment.” Working together in support of each other, they have created this poster; 50% of the proceeds from sales will go to benefit Detroit Hives. 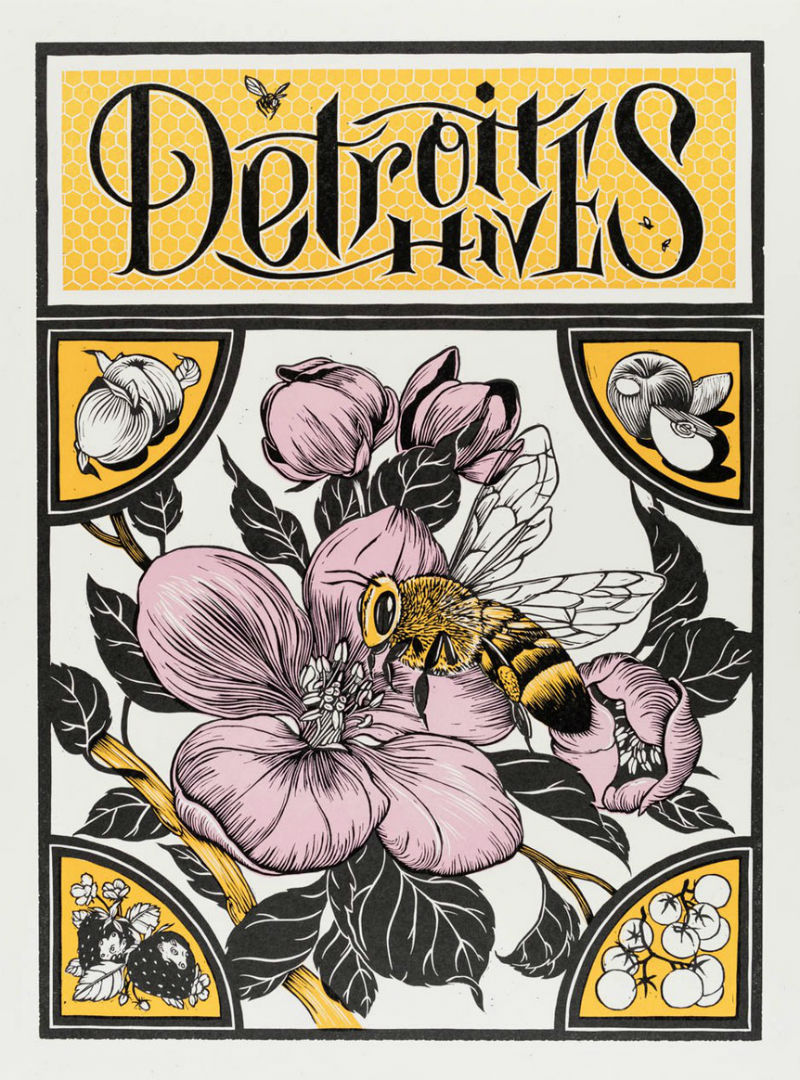 You would be hard-pressed to come up with a better visual metaphor for the fragility and resilience of honeybees than the paper sculpture by Beth Johnson for Kevin Box. Covered by a glass bell jar, the warmly colored paper bees almost seem to hum as they go about their business tending the honeycomb. The paper construction is a preparatory model created by Johnson, an artist with a keen interest in origami, for Box, who works in metal. 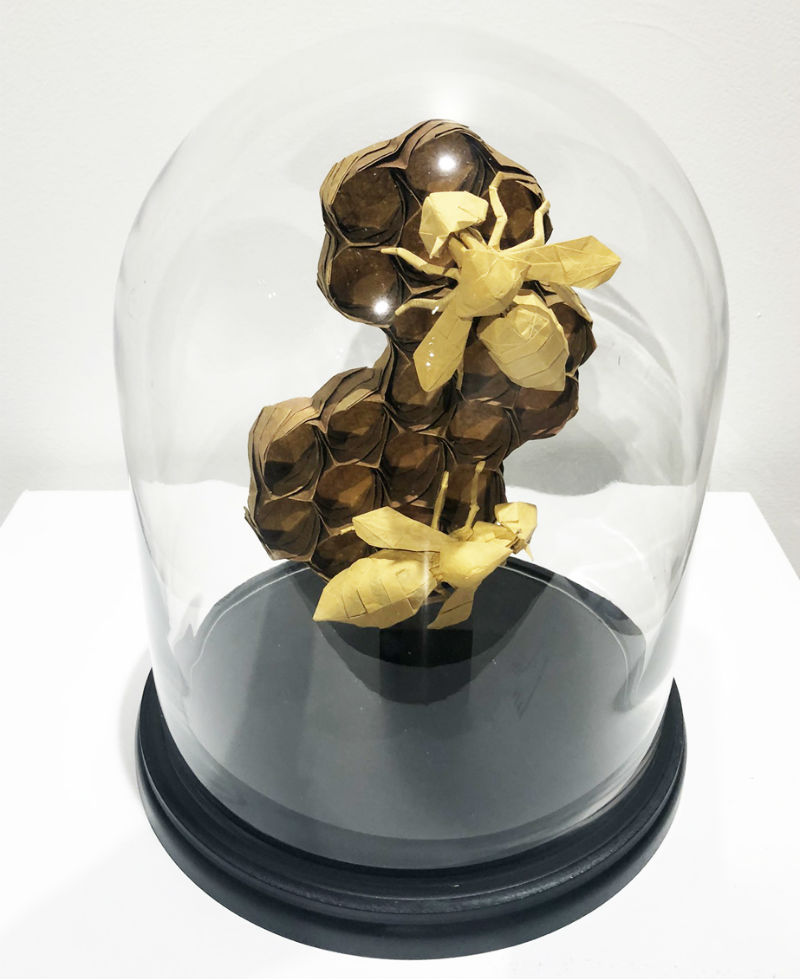 Embedded in Jesi Evans Murphy’s fiber pieces are her childhood memories of working on handicrafts with her mother, grandmother and great grandmother. The Kentucky artist remembers too, how, as a child, her grandfather kept honeybees. He protected them from predators and provided them with diverse plants; in return, the bees worked tirelessly to provide her family with honey, and to pollinate the trees, bushes, and flowers in their garden. With these embroidered and appliqued artworks, she reminds us of the importance of pollinators and our role in their conservation.

Since the Festival of the Honeybee is an annual event, we can look forward to a yearly update from artists on how -- and whether -- we are protecting the environment. The honeybees remind us that we depend on them as much as they depend on us.

"Hive/Mind ii" is at 22 North Gallery in Ypsilanti until September 28. The next exhibit, "Unraveling Racism: Seeing White," runs October 4-20.