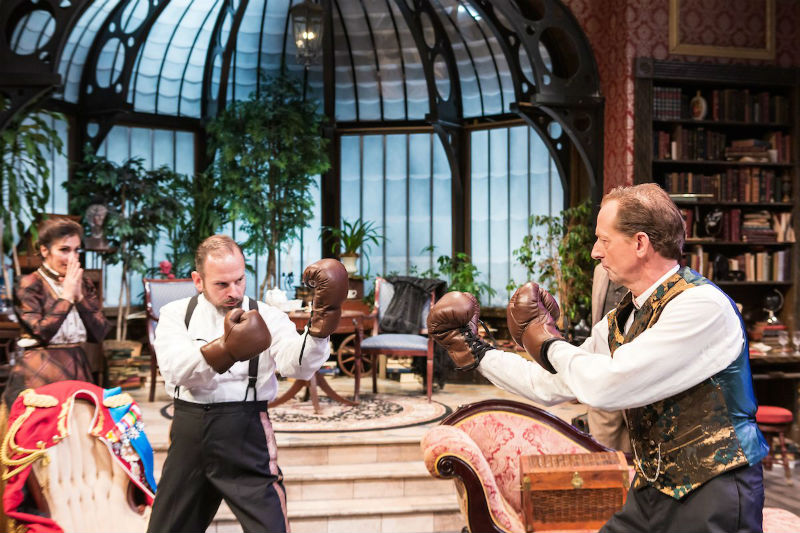 Local Baker Street Irregulars who enjoyed David MacGregor’s 2018 world premiere production of Sherlock Holmes and the Adventure of the Elusive Ear at Chelsea’s Purple Rose Theatre may now revisit the world’s most famous detective in his London flat for yet another all-new case.

MacGregor’s world premiere follow-up, Sherlock Holmes and the Adventure of the Fallen Soufflé, directed by Michelle Mountain, opened this past weekend at the Purple Rose. Fans of Ear will not only recognize the same actors playing the show’s primary roles -- nice bit of continuity, that -- but also Bartley H. Bauer’s sumptuous, award-winning set, which has been gloriously resurrected.

Just as Ear wove together cases involving Victorian-era celebrities Vincent Van Gogh and Oscar Wilde -- I believe I likened it to a lofty, arts-centric Love Boat episode -- Soufflé does the same, this time bringing both world-renowned chef Auguste Escoffier (Tom Whalen) and Prince of Wales Albert Edward (David Bendena) to 221B Baker Street.

The reasons for the men’s visit are anything but clear at first. Escoffier barges into the apartment, rambling about scandal and imminent ruin before collapsing unconscious on Holmes’ floor. The piggish Prince -- routinely mocked by the infantilizing nickname Bertie assigned by his disapproving mother -- arrives dressed in full, pompous military regalia and a simple black mask (an absurd attempt to hide his identity). He soon explains that he’s been targeted for assassination by anarchists, but you might well wonder: What’s that got to do with Escoffier’s troubles? And why does the surviving, brilliant daughter of Holmes’ criminal nemesis Moriarty -- namely, Marie Chartier (Caitlin Cavannaugh) -- sneak into the flat for a secret, one-on-one conversation with Dr. Watson (Paul Stroili)?

Answering these questions would, well, suck all the air from MacGregor’s Soufflé, so I’ll simply leave them there.

But suffice it to say, there is indeed a puzzle to be solved, with some fanciful twists and turns along the way. Yes, the play’s famous clients can seem self-consciously gimmicky, particularly in contrast to Holmes’ and Watson’s compelling complexity. And the nearly two-hour show’s overall tone is as light and airy as its title pastry, so it fittingly feels more like a theatrical dessert than a meal. Mountain never lets MacGregor’s Soufflé collapse, though, keeping the production bright and brisk throughout.

Mark Colson breathes refreshing life, once again, into the iconic figure of Holmes -- a character that can occasionally, because of his sublime intellectual gifts, come off as nearly inhuman. Colson’s Holmes not only has a beating heart but a wickedly charming dry wit as well. Similarly, Stroili and Sarab Kamoo -- who reprises her role as Holmes’ lover (and opera singer) Irene Adler -- provide a perfect “chosen family” for Holmes. Stroili lends subtle complexity the chronically under-appreciated, conventional Watson, who’s mostly fine with Holmes hogging the spotlight but longs for a little recognition of his own now and then; and Kamoo shines as a fierce, smart, cosmopolitan woman able to stand toe-to-toe with Holmes. Cavannaugh, finally, gets to show off her uncanny ability to switch accents on a dime, perform a brief Irish jig, and embody a wily, smooth character whose true motives (and next move) are always cloaked in darkness.

Bartley Bauer’s fabulous set, furnished with Danna Segrest’s myriad, meticulously detailed props, remains a feast for the eyes, with an architecturally ornate, inviting atrium as its stunning centerpiece. Lighting designer Dana L. White illuminates the flat with soft, nostalgic warmth, while Suzanne Young’s costumes provide crucial additional visual dimension regarding not just the historical time and place but also character. (Bendena appears to be padded beneath Bertie’s military uniform, for instance, to underscore that the Prince is a man of voracious appetites.)

Unlike Sir Arthur Conan Doyle’s original stories, Soufflé isn’t primarily focused on Holmes miraculously sussing out the solution to a single mystery. Indeed, the goalposts seem to get moved a few times as we wind ourselves toward the tale’s end. It would be more accurate to say that the play is instead a means for us linger in the charming company of these familiar, beloved characters.

And because last year’s Sherlock Holmes and the Adventure of the Elusive Ear already laid out some necessary exposition, which is occasionally, briefly footnoted in this sequel, Soufflé remains largely unburdened by such narrative baggage, and is instead simply able to -- well -- rise, and shine, and be the theatrical confection it aims to be.

Sherlock Holmes and the Adventure of the Fallen Soufflé is at The Purple Rose Theatre in Chelsea through December 21. Visit purplerosetheatre.org for tickets, showtimes, and more information.