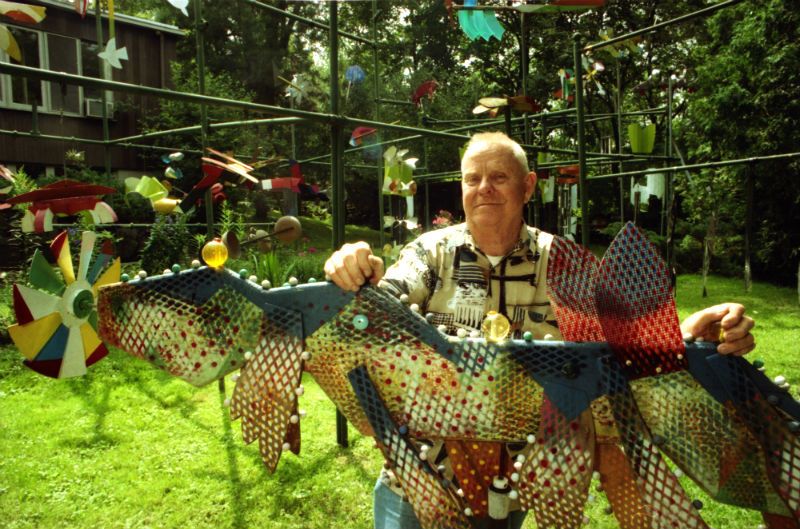 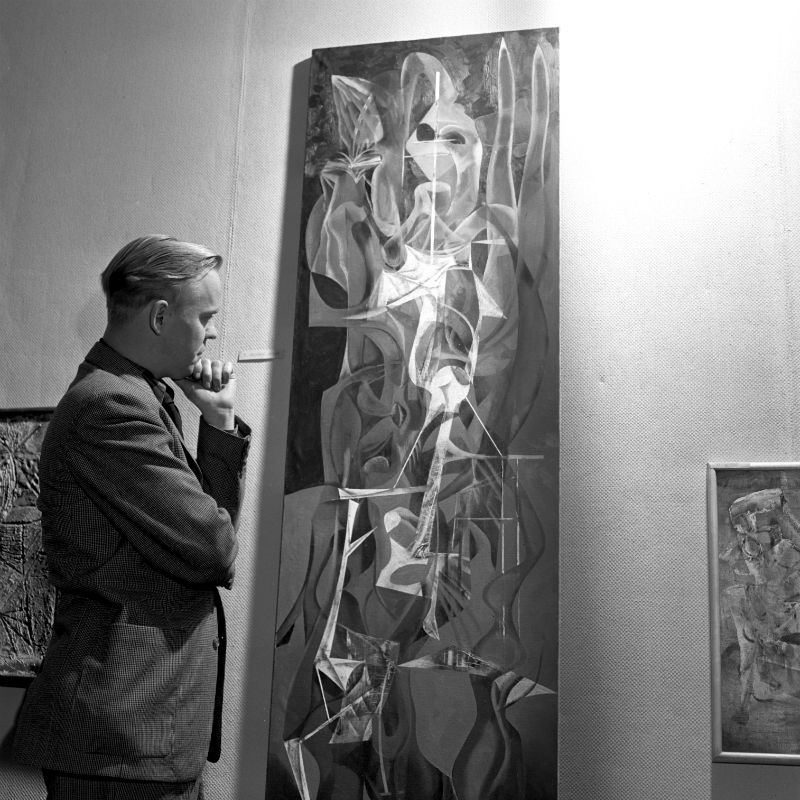 Gerome Kamrowski with one of his paintings in the Rackham Building, January 1951. Photo donated by The Ann Arbor News.

I gained the sense in the interview that Kamrowski thought that this modification of automatism was (to borrow yet another cliché) a bit of a one-trick pony. A Minnesota native, Kamrowski moved to New York City in the late 1930s to study Surrealism with its greatest American-based practitioners -- this period was, after all, the onset of World War II where many European modernists found the attitude of their governments to be uncongenial to their health and spirit. He ended up working alongside such diverse masters as George Grosz, Laszlo Moholy-Nagy, and Roberto Matta as well as Americans Baziotes, Pollack, and Robert Motherwell, among many others.

This biographical fact alone meant Kamrowski had an equally expansive view of his aesthetic and he wasn’t going to tie himself down to a single artform for long. Never mind that he co-invented what is now considered the single most significant contribution to 20th-century American art: Gestural Abstract Expressionism.

Rather than consider that he had somehow missed the boat in terms of fame and fortune, Kamrowski pithily said in this interview of the vicissitudes of fate, “I’d either be rich now, or dead -- and probably both.” Instead, when invited, he moved to Ann Arbor where he just kept doing what he intended to do while teaching at the University of Michigan School of Art.

Surrealism had never really gripped American artists like it did the Europeans, and given the level of creativity and competition of the New York City modernists -- perhaps analogous in the western world only to the 15th-/16th-century Renaissance epoch or the 19th-century period of French Impressionism/Post-Impressionism -- Ann Arbor was going to solve two practical problems for Kamrowski: First, Ann Arbor would a stable home for his family; second, the University of Michigan was going to be a congenial environment for his artful adventures.

Which brings us to this expansive retrospective at Ypsilanti’s Michigan Art Gallery. It’s been 16 years since Kamrowski’s work has exhibited locally after a trio of retrospectives held after his death at the University of Michigan Museum of Art (The Worlds of Gerome Kamrowski, Surrealism and Beyond) and Chelsea’s River Gallery (Gerome Kamrowski: Paintings, Drawings, Sculpture, Constructions and Gerome Kamrowski: 1914-2004, A Memorial Retrospective).

There’s been plenty of tantalizing hints and retracted announcements of such a retrospective since 2004 -- and there have been Kamrowski retrospectives held worldwide through this period of time -- but nothing’s happened in our vicinity until Gerome Kamrowski: Ann Arbor’s Own Surrealist.

It’s been well worth the wait. The Michigan Art Gallery is a handsome venue for the exhibit -- and like Kamrowski himself, a little bit off the beaten path. But close enough to make the visit worthwhile.

The art is hung salon-style through the gallery, which allows for an expansive sense of where Kamrowski traveled in his solitary artistic journey while not allowing any single kind of art to dominate the work on display. One gains the sense he would have liked that.

Since these artworks span the length of his career, the work on display allows the viewer to see repetitive motifs working themselves in Kamrowski’s artistry. As such, a work like 1974’s acrylic on canvas Yellow Pattern finds him working at the avenue of automatic drawing and abstraction through a harmonious geometric patterning that falls somewhere between the sort of decorative psychic doodling of the prior surreal artform coexisting harmoniously with a controlled curvilinear action that’s representative of the latter kind of geometric-oriented art. 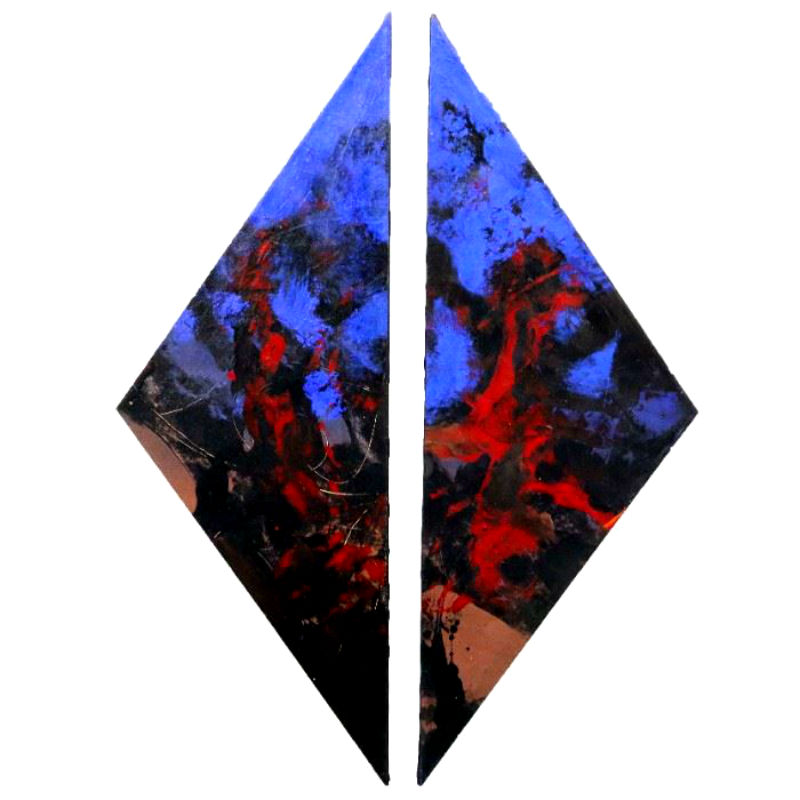 Likewise, one of the major finds in the exhibit is 1959’s acrylic on canvas Marriage of Heaven & Hell diptych where Kamrowski cleverly consolidates the lessons of action painting in an extraordinarily accomplished composition.

The gesture of this tour de force is as complex as any Abstract Expressionist masterwork -- the sweeping application of Kamrowski’s red and blue pigments are crafted with a complimentary nuance that reinforces its appearance -- yet his gestural application is also sufficiently nuanced as to dazzle the viewer’s eye in, around, and through the acrylic pigment articulation.

Just as Marriage of Heaven & Hell cleverly anticipates the sharp-edged geometry that abstractionist Barnett Newman would bring to his work at the turn of the decade; it also uses the negative space that the 1960s Post-Painterly Abstraction artist would use to complement first-generation abstraction by segregating the halves of the diptych.

Never let it be said that Kamrowski didn’t have a hearty sense of humor. You just need to know where to look to see his humor. For when viewed retrospectively, his late-career sculpture appears as a surprisingly coherent realization of his earlier surreal work.

The 1980’s acrylic on paper Screened reflects a half-life in automatic drawing fused to the subtle geometric undertow Kamrowski liked to add to his work. One of the challenges of this art is determining where the automatism leaves off and the pattern begins. The delicate lacing of the work’s grids makes any assertion difficult to determine.

But try a little more of an offbeat approach and conceptualize these drawings reconstituted in three-dimensions. Once noticed, one begins to see the ingenious inspiration for Kamrowski’s mixed-media sculpture. 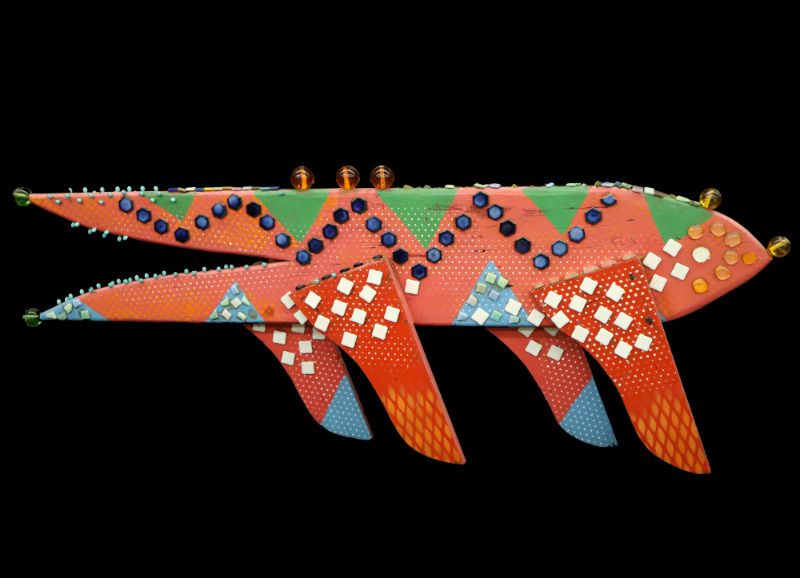 Take, for example, the undated but likely late 1980s-early 1990s Hyena Love -- a mixed-media, multi-colored painted wooden sculpture that sports beads, spheres, reflectors, and tiles. And then return to the understated biomorphic outlines of Screened.

This is where Ann Arbor’s Surrealist ultimately found himself. At the end of Kamrowski’s career he was surrounded at his residence by his fully realized beaded weather vanes, wind mobiles, and other such biomorphic surreal friends. Essentially, his art had moved from his two-dimensional drawing board and canvas to leap into his physical surroundings. It was a transition that none of his mid-20th-century peers made -- most of them ultimately caught up in what amounted to a career-long repetition.

It took Kamrowski’s willingness to forgo superficial celebrity and its consuming success to find the way to his art. And it is this sure-minded discipline that now makes his concluding comment in our long-ago summer interview now make sense.

Kamrowski closed his comments that afternoon with the near-whispered observation that “the whole point is being an artist.” And the look in his eyes hinted at a kind of closure. As the Michigan Gallery’s display amply illustrates, he admirably succeeded at the task.

“Gerome Kamrowski: Michigan’s Own Surrealist” is at The Michigan Art Gallery, 5138 W. Michigan Ave, Ypsilanti, through January 25. Gallery hours are Monday-Friday, 9 am–5 pm, and by appointment. For information, call 734-434-2660 or visit michiganartgallery.com.