Dale Fisher's "Washtenaw County: Visions of the Eagle" offers a look at our lives before Covid 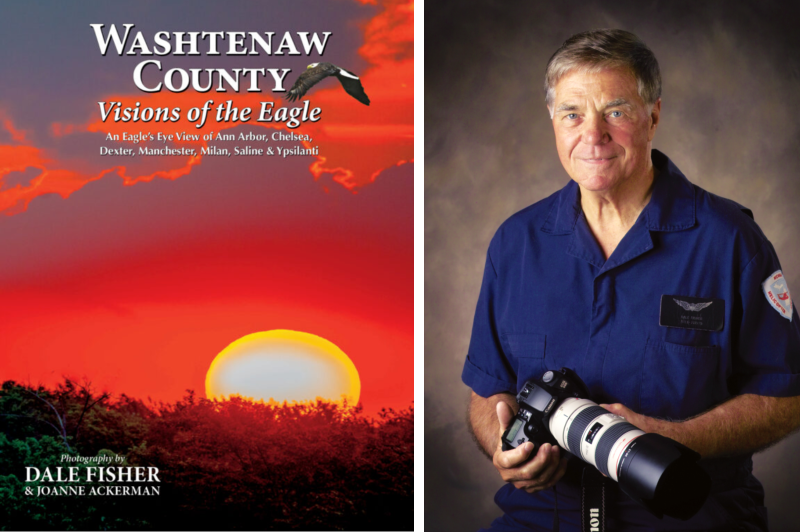 It's just a fish-lens photo inside Yost Ice Arena. There's nothing special about it per se. The Michigan Wolverines are playing what looks to be the Wisconsin Badgers; it's 50 seconds into the game, a zero-zero tie, the stands are mostly full.

But during a time when all norms have been flipped because of Covid-19, seeing this simple scene of a hockey game being played 2 miles from my locked-down house hit an emotional hotspot that I've been pretty good about suppressing: dreaming about life in the Before Times.

The photo is in Dale Fisher's new book, Washtenaw: Visions of the Eagle, which is filled with pictures that will make you wistful for a full Big House, a packed Crisler, community fairs, and other events that brought people together for shared experiences.

Like the other six books by the Ann Arbor native, Fisher's latest focuses primarily on aerial photography, capturing the natural beauty and historic small cities of our county -- as well as that giant football stadium -- from the open door of a helicopter. But there are numerous ground-level photos among Washtenaw County's 288 pages, too -- many not even taken by Fisher or his co-photographer and partner Joanne Ackerman, who shot the book's cover image. The Yost photo is by Jonathon Knight. Other photos are provided by the businesses that helped sponsor the book and as well as nonprofits whose work Fisher supports. Those images are interspersed with Fisher and Ackerman's photos, blending editorial and business shots. It's a quirky approach, but not all that different from the way Fisher funded his other collections.

"In previous books, our business sponsors have been featured in the back section," Fisher said in an email interview. "In the Washtenaw County book, we chose to scatter them throughout the editorial pages and in their community sections."

Those community sections include numerous pages dedicated to Ann Arbor, Chelsea, Dexter, Manchester, Milan, Saline, and Ypsilanti. When taken as a whole Washtenaw: Visions of the Eagle is a love letter to the area where the current Jackson County resident grew up and to the humans who make it special. That's why the nonprofit sections don't feel wholly out of place in the book; they're an important part of the community Fisher loves to document.

"We chose three major non-profits whose efforts impact the lives of thousands of people," Fisher said. "Because of all the good they do, we wanted to raise awareness for their cause. They were included in the book at no cost. In addition, we have created and donated a custom dust jacket version of the Washtenaw County book for the ChadTough Foundation. One hundred of these custom dustjackets are signed by Lloyd Carr, Chad’s grandfather. These numbered, limited edition books are also signed by Joanne Ackerman and myself, and come with certificates of authenticity, and are available through ChadTough.org." 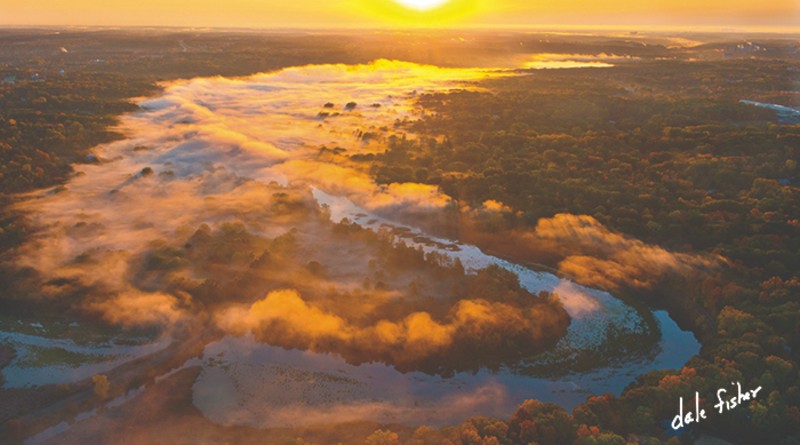 While Fisher and Ackerman took many of the ground-level photos in Washtenaw County -- unusual for these high flyers' books -- the aerial shots are the heart of this collection.

"My favorite places to photograph in Washtenaw County are the Huron River Valley because it looks so different at different times of the day and different times of the year," Fisher said. "Whenever I am in the air in Washtenaw County, I always photograph the city of Ann Arbor and the University of Michigan, because they are always changing. My favorite times to fly are springtime and fall and early morning and early evening."

Fisher has shot aerial photos, primarily from a helicopter, for six decades. But fans of Fisher's photography will have to travel to his Grass Lake studio to see his future work: Washtenaw County is his final book.

"The cost of doing a book like this including all of the helicopter flying time approaches $200,000," Fisher said. "Over the years it has become increasingly difficult to get sponsor support for regional books."

If this is Fisher's final collection, the timing of its release is unfortunate from a promotional standpoint. But it's fortuitous for Washtenaw County residents who might be feeling insular and claustrophobic after six months of quarantine. Washtenaw: Visions of the Eagle is a timely visual reminder that the place we live extends beyond our homes' walls, whether into the county's wild lands or the inside of a hockey arena.

Dale Fisher celebrates the release of his book "Washtenaw County: Visions of the Eagle" with a book signing on Saturday, August 15, 12-6 pm at his photo gallery, 1916 Norvell Rd., Grass Lake, Michigan. To comply with social distancing rules, there will be outdoor seating under a tent and only 10 people will be permitted in the Wings Gallery at one time. Masks are mandatory. Reservations are requested, but not required. Visit dalefishergalleries.com for reservations and more information.