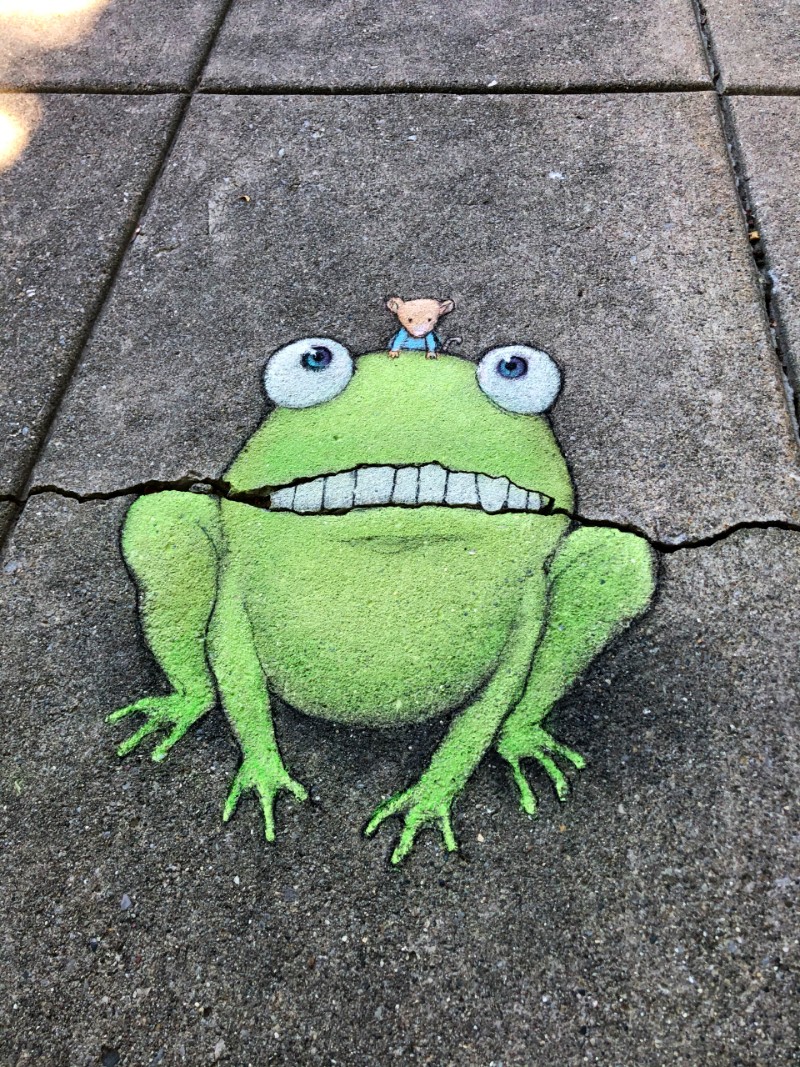 Interesting things learned during two hours of socially-distanced outdoor conversation with acclaimed illustrator and street artist David Zinn while he created Nadine Hypnotizes a Frog on a commercial property in an undisclosed location within the city limits of Ann Arbor.

PEOPLE YELL AT DAVID ZINN
In our pre-interview text exchange, Zinn revealed that people yell at him sometimes when he’s doing his thing. I think yell might be a strong word for the reaction a security guard or stickler-for-the-rules public servant or art-loathing property owner might throw his way. What’s the word for when someone locks eyes with you after staring curiously at you doing strange stuff on a sidewalk accompanied by a mysterious wooden case full of colorful things and a long pole next to you?

“Having a name on the internet doesn’t mean anything when I’m crouching on the ground,” says Zinn, whose work has been shared throughout social media and covered by Huffington Post, Graffiti Art Magazine, Bored Panda, and more. “I’m lucky a lot of people have a blind spot for weird things happening.”

What Zinn does is technically graffiti. But when it’s done on Ann Arbor city sidewalks, it’s completely legal.

But there’s a sweet, sweet caveat:

“Any mark or marks on any surface or structure made without the prior permission of the property owner and made in any manner, including but not limited to, writing, inscribing, drawing, tagging, sketching, spray-painting, painting, etching, scratching, carving, engraving, scraping, or attaching. Chalk marks on sidewalks are NOT graffiti.” (ALL CAPS mine)

DAVID ZINN HAS A RELATIONSHIP WITH THE ELEMENTS
“You can’t argue with the rain,” Zinn says. “And it’s not raining until it’s raining.”

You’d think an artist who deals in chalk and pastel, using sidewalks and surfaces as his canvas—all in the great state of Michigan—would have a more adversarial relationship with something that can destroy hours of his work in a few seconds. Nope.

Rain frees this artist. He’s never overly precious with his work, but even less so when storm clouds gather or rain is in the forecast. It means his “mistakes” (thick-line air-quotes all mine) bother him less and he’s not so concerned with making artistic or anatomical errors in his work. He’s also less concerned with getting yelled at when rain is coming and he’s working on private property.

A recent piece at the Federal Building featuring Zinn’s Professor Goblinksi character was being made ready for action with a natty outfit, briefcase, and well-kempt green hair, but because of a few “mistakes” and the fact that Federal eyes may have been watching, the work was even less precious than normal because Zinn knew it was going to start raining at any moment.

And it did. His academic goblin didn’t last long—all that was left after a light shower were some smudges where Goblinksi’s suit coat and necktie had been. The impermanence of these drawings suits Zinn just fine.

HIS LITTLE SISTER, THE SUN
Rain is one thing. Direct sunlight another. When Zinn scouted a suitable place for him to draw and get questions lobbed at him for 120 minutes, he mentioned finding somewhere without direct sunlight. Sun does weird things to his art. Creates shadows where they’re unintended. Plays with color. Messes with him.

“The sun is like my little sister,” Zinn says. “I’m about to take a picture of something I just finished and the clouds will part and the sun will shine down to see what I’m doing. ‘HEY, HEY! WHATCHA DOING? WHAT IS THAT? WHAT IS THAT? CAN I SEE?’ I’ve literally shaken my fist at the sun before.”

ONE LAST WEATHER THING
Zinn’s chalk art originally started as a “shameless act of procrastination.” A work-from-home commercial artist, Zinn looked for excuses to be outside during Michigan’s handful of 70-degree days.

Chalk art is art. And he’s an artist, right? So spending a few hours outside drawing on the sidewalk on a beautiful day to take a break from commercial design was not just a great way to take a break but something that could be used in the battle against guilt and “you should be working, Dave.”

“There’s a moral imperative to get outside because it’s not going to last. And my idea of a nice day has drastically expanded.” 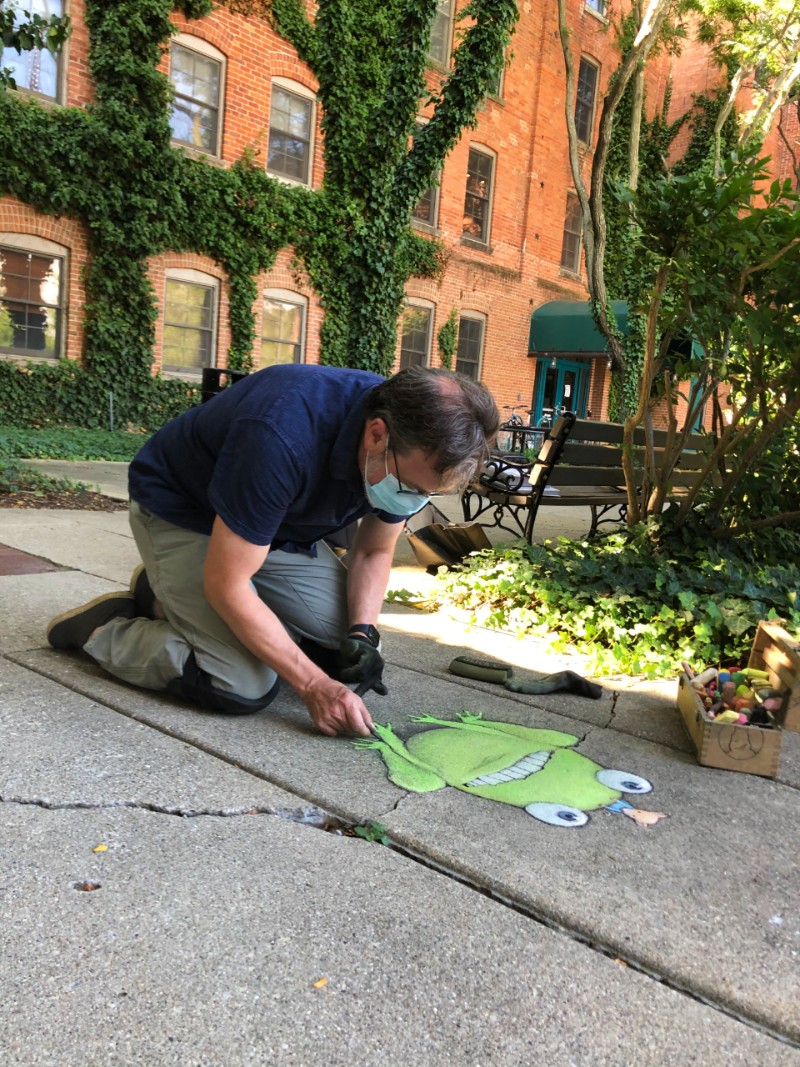 “THE POINTLESSNESS OF DRAWING ON A SIDEWALK IS THRILLING”
David Zinn loves drawing on sidewalks. And walls. Rocks. Outcroppings. Really loves it. The smile he used for this creation, or the hair, was already there on the concrete, the stones, the bricks—he’s just drawing your attention to it. A few weeks, days, or hours later, Zinn’s creation melts away and the original smile or hair is still there as beautiful as ever.

He’s done this on streets. At festivals, workshops, metaphorical workshops.

“It makes me feel more useful than it actually is.”

Zinn appreciates how lucky he is to be where he is in life—professionally, geographically, artistically. He sometimes gets to travel for his art, too. Concrete sidewalks aren’t always a thing in other countries and he told the story of one stop where the hosts had to bring him a huge flagstone to work on because the local surfaces wouldn’t quite work.

To start his street art illustrations, Zinn uses a custom collapsible pole—his chalk stick—even though it doesn’t hold any chalk. It’s his only piece of fancy equipment. He used to use a long piece of bamboo but it was hard to bring on planes and people kept asking him if he was going fishing. At the end of the pole he attaches charcoal (vine or willow), which he uses to outline and sketch out the main features of his work at the angle and distance of optimal public viewing before getting down on his hands and knees to fill in the lines with color.

The chalk. He uses Crayola, paper chalk, and something he talks about like a chef gesturing me over while stirring a fragrant bubbling sauce: butter chalk. Zinn also uses a bunch of little pastels that he picks up in bulk when Michael’s has a 50% off sale. Tools that aren’t precious for art he doesn’t feel are precious.

THE ROSTER OF CREATURES AND CHARACTERS
Maybe you’ve heard of Sluggo, arguably Zinn’s most famous creation. Zinn likes drawing Sluggo a lot because he’s a blob with stalks for eyes and there’s no encyclopedia entry you can compare Sluggo’s form to and snicker to a friend about the accuracy of his representation or email Zinn about it or mail him or shout at the artist the next time you see him on the sidewalk.

For an artist—who I think is pretty awesome as do two people who stop and fawn over David while we talk—he’s still pretty self-conscious about the quality and anatomic accuracy of his work. Doesn’t matter if it’s a drawing created with chalk, on sidewalk cracks, made not to last.

He frets over the frog’s feet. Eyes. Shadows. I’m pretty sure it’s not for my benefit. Everything looks awesome to me, but ask Zinn why Nadine the mouse wears a dress and he’ll explain he’s anxious about correctly drawing her feet and rear sections.

Sluggo was originally the only creation with a name. Then Zinn started drawing flying pigs—sometimes a lot of them all together—and rather than name each one, he came up with something more taxonomical than character: Philomena. That’s what those creatures are. As it happens, Saint Philomena is also the patron saint of infants, babies, youth, and impossible causes. A third-grade class later enlightened Zinn on what he should have called those flying pig creatures: Pigasus.

Back to Nadine the mouse who keeps working her way into Zinn’s work. I don’t think Zinn intended to add Nadine to the top of the frog’s head in the work he did with me, but at some point he wasn’t sure where the frog’s eyes should be looking and—*BOOP*—Nadine appeared. He doesn’t arrive at a sidewalk or surface with a grand plan in mind. The space speaks to him and he kind of goes with it.

As it pertains to links between artwork, Zinn says people assume he has a larger story in his head, which is fine by him. He doesn’t and knows that the story in other people’s heads is way better than what they’d think of his. But his Instagram captions do serve as potential chapter headings:

Nadine and the Unexplored Abyss

Nadine and the Verdant Chapeau

Nadine and the Narrow Path

GETTING REALLY GOOD AT DRAWING GARFIELD
When he’s alone, Zinn listens to music in his earphones. He believes in shuffle and Apple Music—letting fate decide. He gets a lot of music from his childhood, like Bonzo Dog Doo-Dah Band.

“A little absurdity helps keep my mind frame. The best way to make art is to let your inner child do it.”

Zinn is a former children’s radio DJ, hosting Rugrat Review and Mudpie Cafe on WCBN and Michigan Radio. His musical foundation came from the 99-cent records his dad bought at Meijer and never listened to, helping build this childish (in the very best sense) streak in Zinn.

The two things Zinn sees kids drawing on sidewalks the most these days are Spongebob Squarepants and Pikachu. He doesn’t say that as a commentary on kids these days. Nope. He draws a direct line to himself as a youth, mastering the art of drawing … he pauses before revealing the character … Garfield.

Garfield doesn’t seem like a very serious comic and comic character, especially these days, which is where I think a lot of hesitation would come admitting you labored over drawing something like him. But Garfield helped unlock something in a young David Zinn, who went from reading Garfield to drawing Garfield to realizing—once he noticed the black hash mark pattern of Garfield’s fur was just a thickening and thinning triangle—that he could create Garfield. Actually create. And that’s what a bunch of these kids drawing Spongebob and Pikachu realize all the time.

Richard Retyi is the communications and marketing manager at the Ann Arbor District Library and maintained a healthy social distance during this interview. Masks on, people.