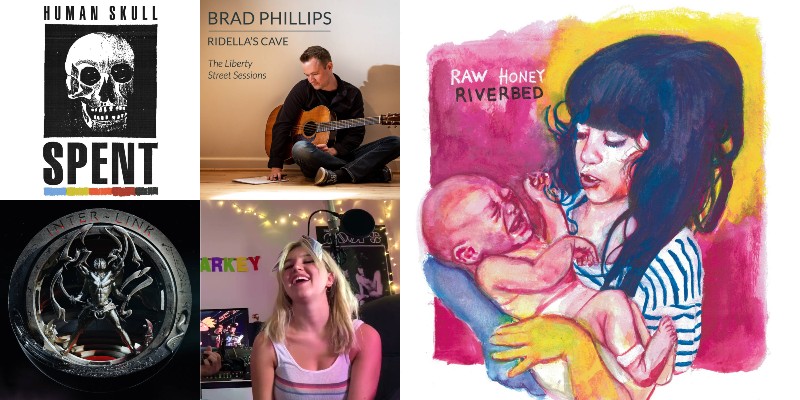 Raw Honey, Riverbed
Maggie Hopp has been making music as Raw Honey for nearly a decade, but this is her first proper album following a compilation last year and an EP in 2016. The music on Riverbed is light and lovely atmospheric indie rock, which makes the heaviness of the lyrics hit that much harder. Released on Fred Thomas' Life Life label on vinyl/digital.

Elise Robinson, "Shotgun City Sunshine"
I mentioned this Elise Robinson song in a recent post covering contributions to the U-M Stamps School's senior exhibition, but perhaps you're not the sort of person who reads every word on Pulp, so I thought I'd highlight again here in the music section. RIYL like Beach Fossils, Hatchie, chorus-y guitars, and male-female vocal leads. The first three minutes of the video show scenes of the musicians making the song, then the super-catchy tune kicks in.

Brad Phillips, Ridella's Cave - The Liberty Street Sessions
It's rare we get to feature bluegrass, country, or classical music on the Friday Five—but Ann Arbor's Brad Phillips just stepped right up and offered to represent all three. This uber-talented violinist/guitarist/mandolinist created the music on this album when he served as resident artist at Chelsea's Purple Rose Theatre Company and designed sound for a 2019 theatrical production of All My Sons by Arthur Miller.

Brijawi, Inter_Link EP
I still don't know anything about Ypsilanti's AGN7 Audio, and I don't know who Brijawi is or where he's from, but I'm always happy to revisit my love of drum 'n' bass, which is the sort of music both this label and musician specialize in—expertly so, too.