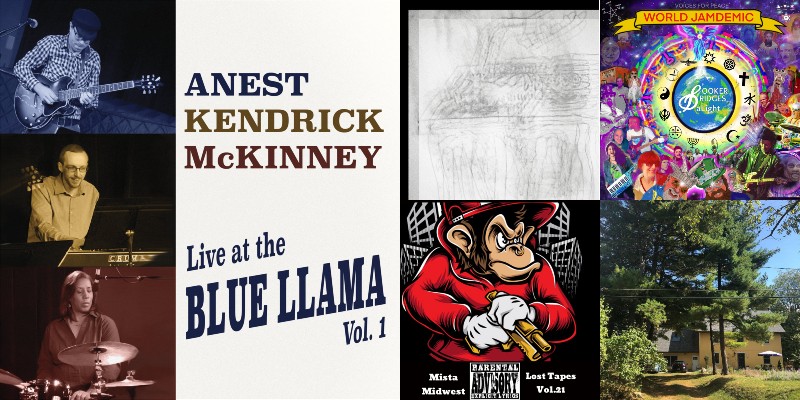 Anest, Kendrick & McKinney Organ Trio, Live at the Blue LLama Vol. 1
Following releases by Adonis Rose and Soul Message Band, the Anest, Kendrick & McKinney Organ Trio's Live at the Blue LLama is the third such album I know of that's been recorded at the downtown Ann Arbor jazz club. They are the first of many live albums that will be recorded at Blue LLama, and guitarist Alex Anest writes on his Bandcamp page as to why: "When the Blue LLama Jazz Club opened in Ann Arbor in late 2018, I knew I wanted to make a live recording there. The owners had spared no expense in designing the room to be perfect for live music, and they had a state of the art sound system." The album, which features drummer Gayelynn McKinney and organist Corey Kendrick, kicks off with "Chitlins con Carne" by Detroit guitarist Kenny Burrell and explores similarly greasy soul-jazz jams such as Grant Green's "Idle Moments" and a slow-burn take on the jazz standard "Willow Weep for Me."

Smiles Like Sewage Fires, A Collective Understanding of Worthlessness (Demo)
This one-woman grindcore project from Ann Arbor features two songs under a minute: one with unrelenting fury and the other mired in heavy sludge.

Mista Midwest, Lost Tapes Vol.21
This Ann Arbor-Inkster rapper has released a tremendous amount of music on his Bandcamp, and his latest edition of Lost Tapes clocks in at 18 tracks.

Adlai, A Lil House and Some Treats
This EP by Ann Arbor's Adlai begins with a house tune built from a sample of Deniece Williams' 1976 ballad "Free" and continues through dance-music plunderphonics for the five subsequent cuts. It's a really nice in-between state of DJing and creating sample-based original music.