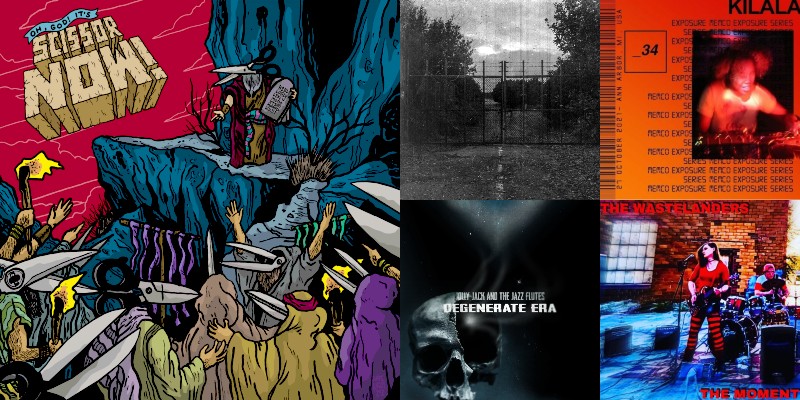 The Wastelanders, "The Moment"
This Ypsilanti duo is gonna get tired of White Stripes comparisons—mostly because it's off-base. Yes, The Wastelanders are a guitar-drums duo, but their version of heavy music sounds more inspired by Black Sabbath and other '70s stoner acts rather than Jack & Meg White's former group. "The Moment" is the duo's latest single, but you can check out the band's 2020 demo here.

Sean Curtis Patrick, House of Barings SIMEX
This Ann Arbor ambient artist released a two-track single that's just in time to soundtrack your Halloween. Play this while handing out candy, scare the kids.

Kilala, Exposure Mix 034 and Various Artists, MEMCO Beattape 02: Musique Concrete
More goodness from the Michigan Electronic Music Collective (MEMCO). The first is in the form of the latest Exposure mix, this time by Kilala, who describes it thusly: "In this mix, slavoj meets techno party in a dan dan brr brr moment." I have no idea what that means, but I'm down to LEARN. The second release is the second beat tape from MEMCO and is built upon "the intent to compose with materials taken from an existing collection of experimental sounds." Unlike the Exposure mixes, which are generally DJ sets, this beat tape features original left-field electronica tracks inspired by musique concrète and features works by Koray Benli, Miguel Cisneros, Mark Kachkaev, Nathan Price, and Owen Blanchard.

Same Eyes, "Such a Shame"
Last week I wrote about the new two-song single by Ann Arbor synth-poppers Same Eyes, but I missed that there was also a music video for one of the tunes. Great jam and a cool vid created by a bunch of Southeast Michigan talents.