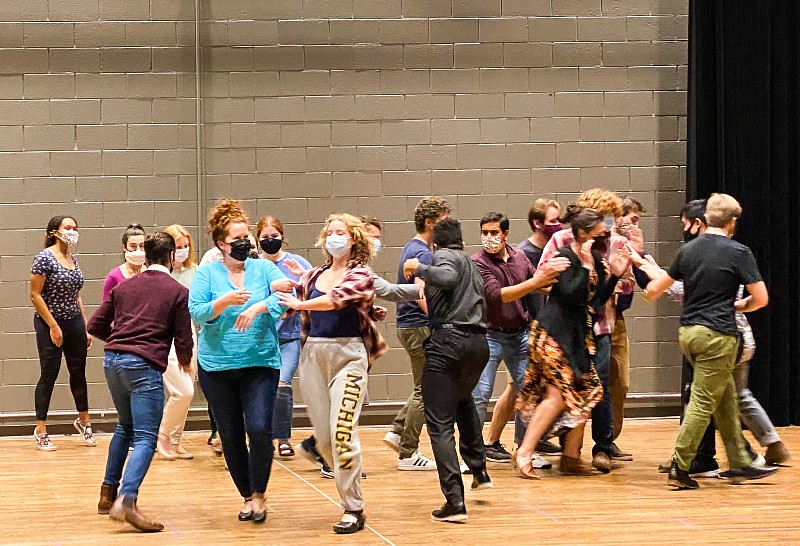 “There was this idea of trying to figure out a couple of things that were going on in society, if you go the psychologist route for why we tell the story over and over again,” she said. “Part of it is the blended family and part of it is the experience of discovering your own self-worth. What really interested me is that as the fable traveled around the world, the role of the prince is the one that really shifts a lot. Sometimes the prince goes through a perilous test as Cinderella does, sometimes the prince is completely absent. It depends on how the storyteller is using this idea of a worthy person going through adversity and triumphing through difficulty and receiving something in the end. I think that’s a really human experience that we all have outside of a bit of romance or marriage, especially now that we have gone through COVID and gone through this adversity we get to emerge through the other side hopefully changed and with rewards for the better.”

The last academic year was particularly hard on the performing arts, but this year things are a bit different. Even though COVID remains a major health issue, the success of vaccinations has allowed for some return to normal.

“There is a huge difference, so different that it kind of seems scary to be honest as I try to prepare myself for everything,” said Coté. “The biggest difference is that we are no longer under room arrest because the vaccination of students affords way more rehearsal time. The hardest thing we did last year was we tried to do a Donizetti opera in like two hours of rehearsal.”

“There is a flow to our rehearsal process and last year it was all broken up into little bite-size portions and we couldn’t get that energy in rehearsal going,” he said. “This feels much more like a regular rehearsal in terms of energy and investment and we don’t have any physical distancing this year so that people can act on stage in a more usual way, so close to normal I can taste it.”

“This is a very exciting role. It’s probably the most exciting role I’ve sung yet,” said Beucher. “What I love the most is that we are taking a different take on Cinderella so it’s less of a poor, defenseless woman and we’re trying to empower her and give her a job and a purpose.”

Amon said that Cinderella is usually a character where things happen to her without her making them happen.

“She is thrust into this sad situation but then she’s luckily visited by a godmother and granted all these magical things and the prince kind of sweeps her out of her sad life,” Amon said. “I like that she actually makes decisions for herself and has a little agency and control over her life and a little more personality than in the Disney version of Cinderella. Massenet colors her in a lot of ways. She's super passionate and she’s kind of funny, and so it’s fun to do this character in an operatic setting.”

Severtson said Massenet does a masterful job of characterizing each of the characters through his music.

“All the essential elements are there from all the Cinderella stories, all the characters we expect are in the Massenet version,” Severtson said. “I find that the characterizations just from the musical side alone are fantastical. The fairy godmother is a coloratura with inventive and fantastical high notes and facilities almost like it’s magical. When you hear her music you can hear the music expressed vocally.”

Severtson said Massenet’s music is in the tradition of French grand opera and romanticism but also has a touch of Richard Wagner’s musical drama.

Coté said Massenet finds the right balance between the traditional and the new.

“What is unique and special in Massenet’s treatment is that he walks this amazing line between being contemporary with other composers of his time moving toward this music kind of form, but there are still musically defining kind of arias for the audience to know ‘I am listening to music now, this is meant to be a music-driven experience,' as opposed to a theatrically dominated experience,” Coté said. “Especially the choir scenes in this production are really shaping up to be amazing musical moments in the overall structure. We’re trying to keep it really crisp, really fast-paced, really bubbly, and really funny. We’re trying to lean into comedy.”

Severtson said this production features several upper-level graduate students in addition to two Cinderellas and an unusual number of mezzo-sopranos.

“It’s a very mezzo-soprano-heavy cast because the prince is as Masssenet intended a mezzo-soprano and we double cast all of the principal roles so we have something like eight mezzo-sopranos in the cast not even counting the chorus,” Severtson said. “We were able to do this show specifically because we knew we had two female voices singing together and he wrote those two acts for the prince. We have two duets and they are essentially singing in the same range. He found there was a real beauty to that quality.”

Coté said there is a long tradition of casting women in the role of young men on stage.

“As I understand it the higher voice reminds the audience of the age of the young man from a romantic point of view,” she said.

The two Cinderellas are finding the role challenging but exciting.

“There is the overall breadth of the role," Beucher said. "There are three arias, four duets and then other group scenes as well as learning to manage the role from start to finish and figuring out the pacing is really important."

Amon said it's fun to go through all the emotions of the character.

“It’s written for a high mezzo or soprano and I’m coming at it from the mezzo side and Colleen is coming from the soprano side,” she said. “It’s kind of interesting from a voice nerd’s perspective to see what things are challenging for each of us.”

Amon said there is a phrase that defines the usual limitations for casting a mezzo. She said mezzos are usually cast as “britches and bitches”.

“It’s the only roles we get to play and there is usually one mezzo in a show, but in this one there’s Cinderella, the prince, one of the two stepsisters, and the stepmother cast as mezzos,” she said.

Amon will be teamed with a mezzo prince, while Beucher will sing with a soprano prince.

“I’ve listened to it with a tenor, but it’s not written very beautifully for the tenor voice,” said Beucher. “When you listen to the prince’s part in a tenor voice to me it feels screamy. It’s much more appealing to hear it in a rounder female voice whether soprano or mezzo. It's a little more colored in range.”

Musical coloring is a major element in Massnet’s music. Severtson will be directing a 34-piece orchestra. He said his orchestra is enjoying the variety of Massenet’s score.

“He really had a way of developing and drawing on all kinds of different colors.” Severtson said, “He was a master orchestrator. It’s very French, it has a French aesthetic to it, at times very elegant, bubbly, sparkling. Elegant is always at the forefront, but Massenet was also an enthusiast and fascinated with the music of Wagner as were so much of the musical world. We get to duets and suddenly he throws in all these Wagnerian elements and you hear the shift that happens with the orchestra and the music that supports that.”

The two Cinderellas think audiences will respond to that rich variety of sound.

“I hope they enjoy the music so much because there is tons of variety in this show, a lot of dance from the French opera tradition, some sounds of Wagner, very lush and some sounds that are folksy and kind of innocent,” said Amon. “I hope they enjoy all the sounds they’re hearing and enjoy our take on it. We’ve updated it. Our director, Abbigail Coté, has invested in a way to see the story in a more modern light. I hope most all come away and say that was beautifully sung and great music.”

Beucher said this is a show that should appeal to first-time opera-goers and opera regulars alike.

“I think we have a great modern take on it and the music will appeal to many different people,’ she said. “There is a lot of variety in the music with a little something for everyone and I think it's a very entertaining production we’ve put together and people leave hoping to see another opera in the future.”

“I want people to think wow that was entertaining. Because nowadays opera is becoming cerebral or a museum. It’s becoming so removed from this theatrical performance spectacular,” she said. “There are people doing things on stage that is not just normal musical theater performers because they have been so well trained and have been working so hard singing very difficult music and when we put this amazing 1970’s sheen on top of that and they’re having so much fun, I just hope the audience leaves singing tunes and is so excited about opera as a media.”