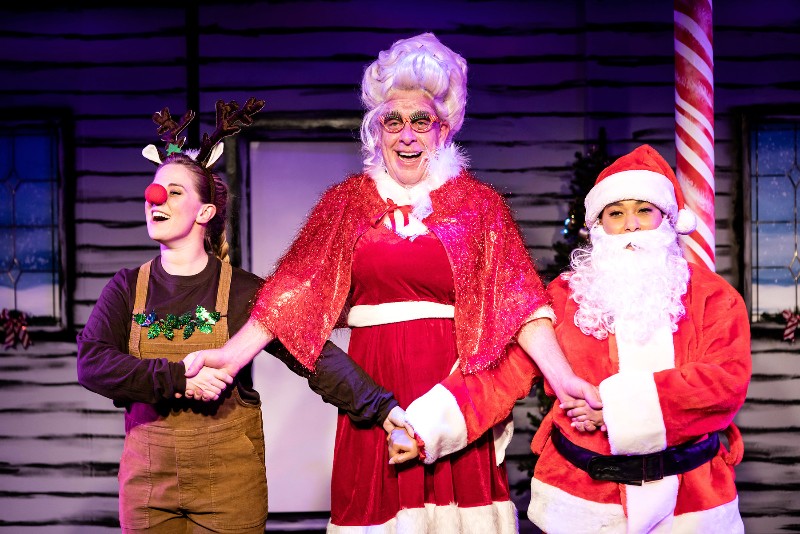 The through story is one you may have heard before. It concerns a certain tiny reindeer named Rudy. Rudy has a red nose that glows so bright … and, of course, there is the Abominable Snowman!!

Three talented performers create multiple characters through 85 minutes of song, dance, and comedy. The audience also plays a role, so be prepared to join in song and spirit.

Milarch directs the show, which after a slow start picks up speed as the actors rush in and out, switching characters and costumes as they go. Milarch keeps them moving and when a scene isn’t quite as planned, that just adds to the comedy.

Lewis is the musical director. He provides piano accompaniment. The songs borrow popular tunes (a la Weird Al) and turn them into comic commentary. The highlight musically is a reminder to the audience to "Get the Shot." (In fact, you have to be vaccinated against Covid 19 to be allowed into the theater, so the audience already got the message. You must also wear a mask.) 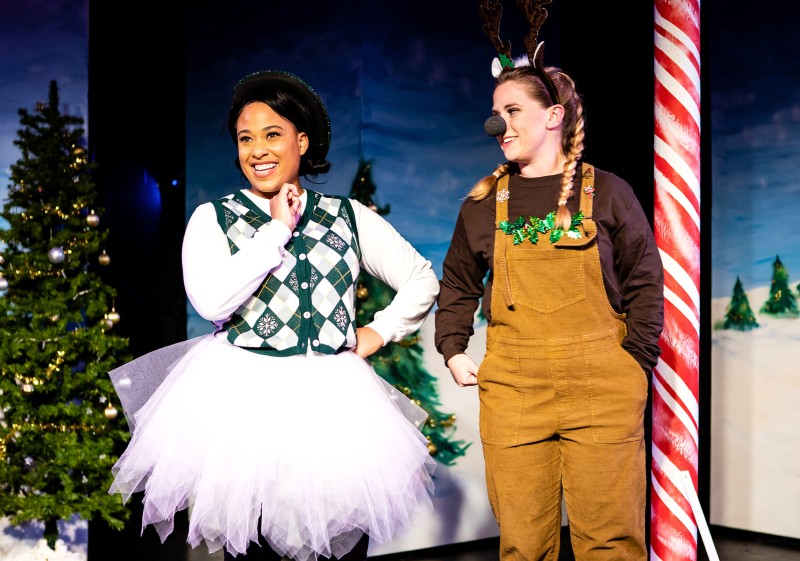 Bryana Hall takes on a variety of characters from Hermey the Elf (who would rather be a dentist) to the story teller. Hall changes her voice for each character, but it’s Hermey’s high-pitched elf voice that rings most true. Hall is a fine singer and sings silly songs with real sincerity. She’s clearly enjoying the easy going fun of sketch comedy.

Monica Spencer plays Rudy. She brings a wide-eyed charm to the friendless deer, who is shunned by other deer until one cold, snowy and foggy night. She also plays Santa (except when Hall is playing Santa in a scene with Rudy). She zips in and out of scenes and seems happy romping about in a red nose that won’t stay put. She also has a fine singing voice.

Hall and Spencer did the choreography for several dance routines. Spencer also designed the simple, yet effective, set for the small Nova stage.

But, clearly, the person having the happiest time on stage is Dan Morrison. The veteran performer is a hoot and a ham. He plays Rudy’s stern father, the famous deers Donner and Dasher, the Boss Elf, a musher named Yukon and, most memorably, Mrs. Claus. Morrison as Mrs. Claus is vaudeville comedy at its most rambunctious. Mrs. Claus is a Southern Lady a long way from Dixie, but she makes sure Santa has the confidence, and the right diet, to do his duty on Christmas Eve. Morrison sashays, dances, does great pratfalls, ad libs freely, reacts with the moment and never misses a beat.

Like all sketch comedy, some jokes and routines fall flat. But wait a minute because a laugh is on its way. This show is a great opportunity to take a child to a live theater performance. The cast engages the audience to hiss and boo the villains, join in on songs, warn of impending doom to Mrs. Claus, and even perform.

This is a holiday break from an all too serious world of problems and that’s what makes it special.