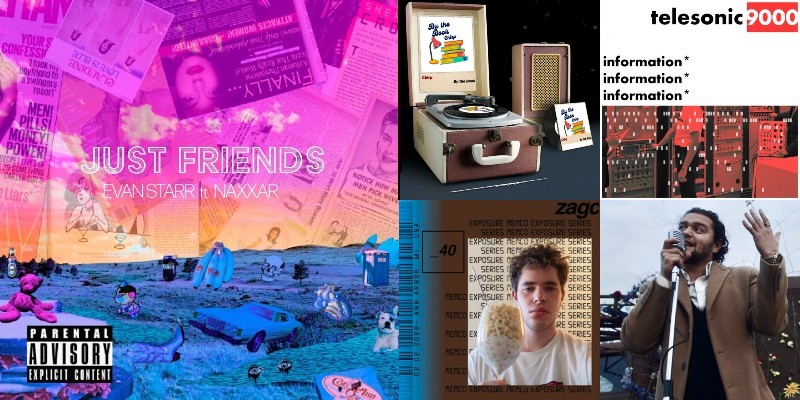 This week features a soulful jammer by Chirp, Kraftwerk-ian electronica by Telesonic 9000, a MEMCO mix by zagc, hip-hop-pop by Evan Starr and Naxxar, and a new video by Nadim Azzam.

Chirp, "By the Book"
Ann Arbor pop-jam band Chirp released "By the Book," the funky and soulful second single from its forthcoming second studio album, In Motion, in the second month of 2022, two days after the second day of February—in a year that has three 2s in it. Do the math. (And then get back to me because I've always struggled with numbers.)

Telesonic 9000, "Information *"
When Ann Arbor's Dominick Gray isn't providing the backbeat for Chirp, he's performing as Telesonic 9000, playing drums to electronic compositions as heard on last September's "Information" single, which evokes Kraftwerk and synth-pop. His live shows are multimedia events using public domain footage—you can watch a concert video of Telesonic 9000 doing his thing on December 16, 2021, at Ziggy’s in Ypsilanti for a limited amount of time.

zagc, Exposure Mix 040
While most mixes in the Michigan Electronic Music Collective's Exposure series are focused on the dancefloor, zagc's manic blend would likely only suit the boogie-down moves of Elaine Benes. This is 45-minutes of herky-jerky, squealchy, chiptune-esque zaniness.

Evan Starr feat. Naxxar, "Just Friends"
Evan Starr and Naxxar are U-M students who "drunkenly met on the porch of our apartment building and started a song the next day." Pure (University of) Michigan. Their playful tune straddles hip-hop and R&B with a little bit of Machine Gun Kelly in the sung vocals. The duo enlisted the terrific Detroit artist and recent U-M grad Betsy Alice to create the cover image, and she posted a fun video of her creative process here.

Nadim Azzam, "Don't Tell Me"
I posted the audio for this song a month ago, but Ann Arbor musician Nadim Azzam has now rolled out a video for the track, which mixes warped R&B electroncia—kinda recalling the work of James Blake—and speedy rapped verses.