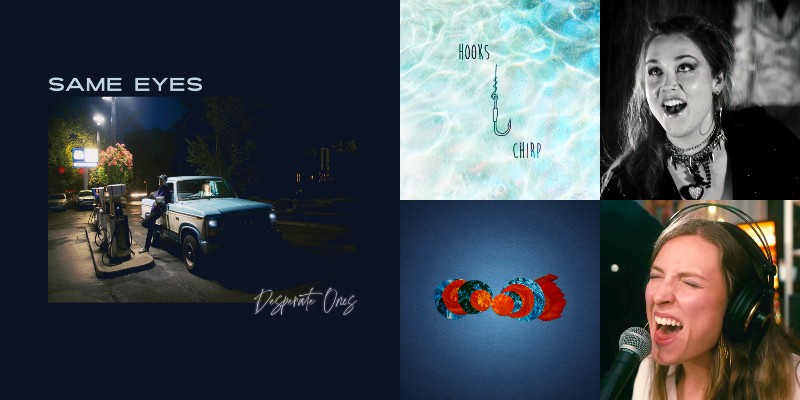 Same Eyes, Desperate Ones
The second album in as many years from Ann Arbor synth-pop dup Same Eyes is another slicing-up-the-'80s collection of tunes that are so, so good. Singer Alex Hughes sells out with every line he delivers—his voice is dramatic and theatrical in ways that not enough vocalists experiment with—and the music he creates with Same Eyes partner Chad Pratt will have you convinced this record came out in 1982, not 2022. They even evoke "Everybody Wants to Rule the World" on the shuffling "Recess." I. Love. This. Record.

Saajtak, "Big Exit"
While Saajtak vocalist Alex Koi is based in Brooklyn, her bandmates Jonathan Barahal Taylor, Ben Willis, and Simon Alexander-Adams are Detroiters with some ties to Washtenaw County's jazz and jazz studies scenes. "Big Exit," the first single and video from the quartet's forthcoming album, For the Makers, showcases Saajtak's genre-defying mix of improvisation, art rock, and experimentalism—to name three genres, all defied. It's great to have this unique group back in the record racks.

Chirp, "Hooks"
The third single off this Ypsilanti group's forthcoming album, In Motion, is the best one yet. The slow-groover is built on the soulful croon of guitarist Jay Frydenlund and is saturated with horns. Recommended for fans of Ray LaMontagne.

Sean Curtis Patrick, Miracle Baby: Lost Souls, Archival Selection - No. 2, and Archival Selection - No. 3, "Haze Loop AEF-96 TBR"
Ambient artist Sean Curtis Patrick left Ann Arbor for Bellingham, Washington last year, but his backlog of tunes run deep as all of these releases are from his archives. Patrick brought his music gear way out West, of course, so these beautiful sounds will tide us over until he starts churning out his next wave of loveliness from his new home.