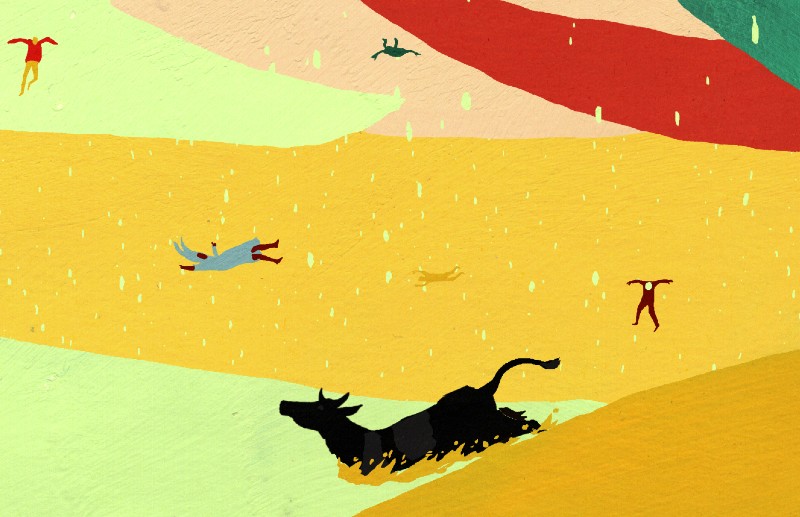 As the viewer drifts downstream, in and out of time and from place to place, we hear the voiceover narration by Canadian actor Florence Blain Mbaye asserting that St. Lawrence island chain—the archipelago—exists. Another voice, aware only of each place on its own, refuses to acknowledge that each island is connected to the rest by the river. As the current pulls the viewer inexorably down the river and toward the sea, there are island stops at Perrot, Montreal, Bonaventure, and many others, finally reaching Percé Rock on the edge of the ocean. The archipelago exists indeed.

The animation is spectacular and joyful and is present in almost every frame of the movie. As varied as it is—including the animation of maps, overlays of film footage, views of landscapes through keyholes, and a remarkable scene of red churned water left in a swimmer’s wake—it all hangs together well. One scene brought to mind the stop-motion work of Eraserhead, while others had the feel of watching A-Ha’s video “Take On Me” only much more beautiful. It never occurred to me that 14 different animators contributed to the film until I saw the end credits.

There are frequent cuts to archival footage from 1941’s promotional film Les Îles du Saint-Laurent. Often, the animation in Archipelago fills in what is just off screen from the original, or adds color and texture to what is an otherwise flat image. While Les Îles is available to watch online easily, I preferred to leave it alone. I didn’t want to dissect Archipelago in the same way that I don’t want to take apart something living.

One scene, toward the beginning of the movie, is narrated in the Algonquian language Innu-Aimun, spoken by indigenous people of what is present-day Quebec. This passage was not subtitled in English or French, which only increased the sense of this movie as a tribute to all of the people through history who have lived on the land of the 1,000 islands.

"Archipelago" will screen in competition at the Ann Arbor Film Festival on March 25 at 5 pm at the Michigan Theater, or online starting March 22. Tickets are available here. Visit aafilmfest.org for the full schedule (March 22-27).