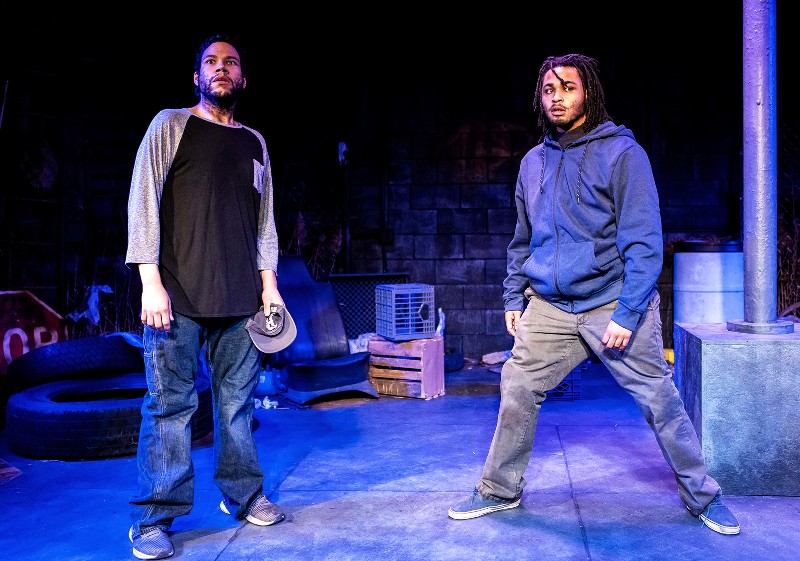 These visits disrupt Kitch and Moses’ near-constant flow of brotherly sparring and swagger, as well as their stretches of unguarded vulnerability with each other. They are each other’s safe harbor, encouraging each other to go on, despite having zero reason for hope within this broken world. 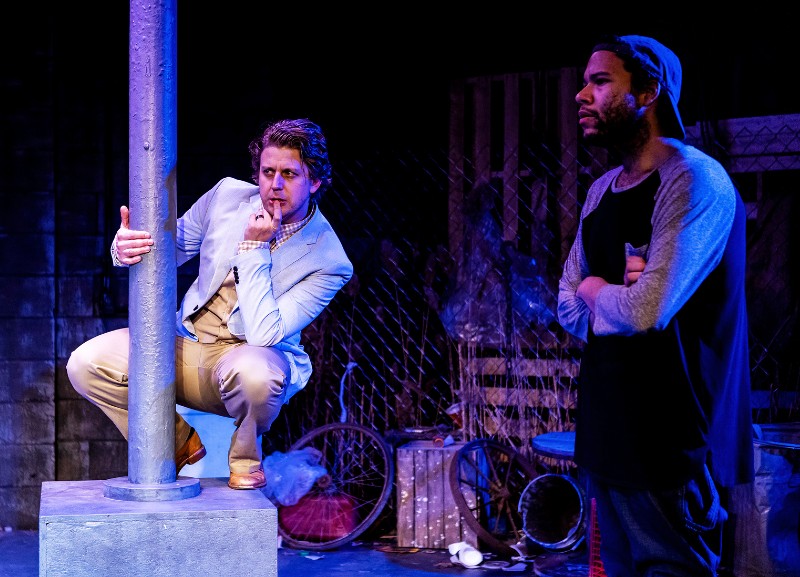 Kevin O'Callaghan and Dan Johnson in Pass Over by Antoinette Nwandu, directed by Casaundra Freeman at Theatre NOVA. Photo by Sean Carter Photography.

Fittingly, the play’s title gets interpreted by Moses and Kitch as if through a prism: at one point, Pass Over signifies an escape to freedom; in another moment, transcendence; and finally, death. In these ways and more, Nwandu’s Black Lives Matter-era translation of Exodus and Beckett’s classic existentialist narrative is nothing short of revelatory—one of those creations where you think, upon seeing it unfold in front of you, “Of course. Of course.”

But credit also goes to Cassaundra Freeman’s sharp, thoughtful direction, and her cast’s gripping execution of the material. Montgomery conveys a frustrated restlessness, even when sitting still, that wordlessly communicates Moses’ longing. He’s the leader of this duo, so he feels more responsibility to help Kitch get out—and more guilt when that again proves impossible. Johnson, meanwhile, is like a provoking younger brother: lighter in spirit, and less prone to dark moods, but also looking to Moses to provide all he needs to survive within this existential holding pattern.

O’Callaghan, finally, has a completely different kind of assignment in terms of tone. Ossifer and Mister are broadly drawn white caricatures: the former a blunt, in-your-face supremacist, while the latter seems exaggeratedly wide-eyed and over-accommodating—until he’s not, and the play’s searing tension cracks wide open. (I’ll confess, these two over-the-top characters initially gave me pause regarding how they fit within the show’s overall tone, but then I considered how black characters have long been painted with a broad brush by white artists, and thus determined this was likely an intentional reversal by Nwandu—a deliberate “white minstrelsy” moment.)

Set designer Forrest Hejkal provides Pass Over with a pitch-perfect backdrop, littered with dented aluminum garbage cans, dry, overgrown weed stalks, chain link fencing, a cable reel, milk crates, tires, a graffiti-riddled stop sign—in other words, a showcase of neglect. Lexa B. Walker lights the space so that it feels, like the play itself, both gritty and otherworldly. Costume designer Krista Brown gives Kitch a more youthful vibe with a baseball jersey and cap, while a hoodie, significantly, gets shared between Kitch and Moses over the course of the show. And sound designer Kennikki Jones-Jones helps ramp up the show’s haunted claustrophobia.

Pass Over isn’t a fun or comfortable show, of course, but boy, does it feel all-too relevant and necessary right now.