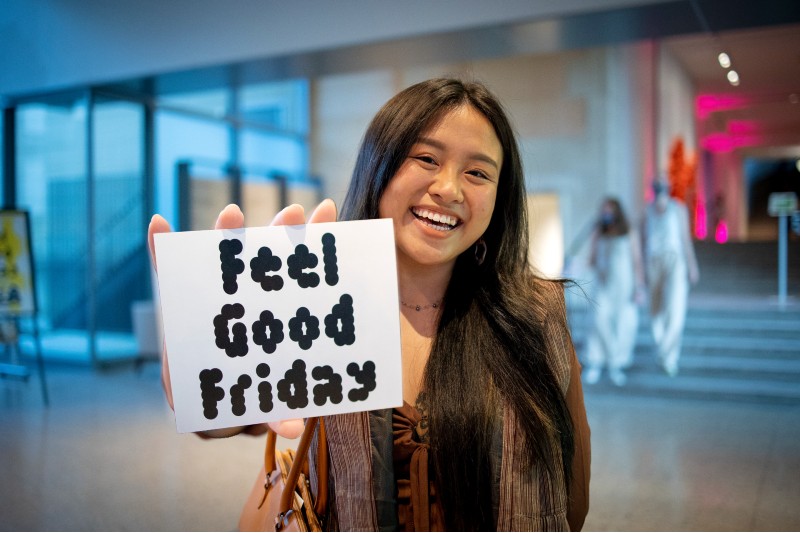 Somebody feels good at UMMA's Feel Good Friday on May 13, 2022. Photo by Marc-Grégor Campredon

The University of Michigan Museum of Art (UMMA) showed that Friday the 13th doesn’t have to be an unlucky day.

Every second Friday the museum presents a self-described "gathering of art and humans." The May 13 edition of Feel Good Friday featured Detroit- and Ann Arbor-based DJs and artists showcasing experimental film and Detroit techno, along with all the UMMA galleries being open for viewing.

Ann Arbor artists Mark Tucker (FestiFools) and Alvin Hill opened the evening by leading a hands-on workshop to celebrate the opening of FUN, UMMA's latest exhibit, which is in the Stenn gallery facing State Street. It's a space where visitors can contribute to a summer-long creation using materials provided in the gallery.

The up-and-coming Detroit-based DJ AK then took listeners through a musical history of Afrofuturism, spinning ghettotech, dubstep, and deep house in the Lizzie and Jonathan Tisch Apse. The crowd, whose ages ranged from young to old, all got to dancing, whether it was right in front of the speakers or as they took in the UMMA galleries. 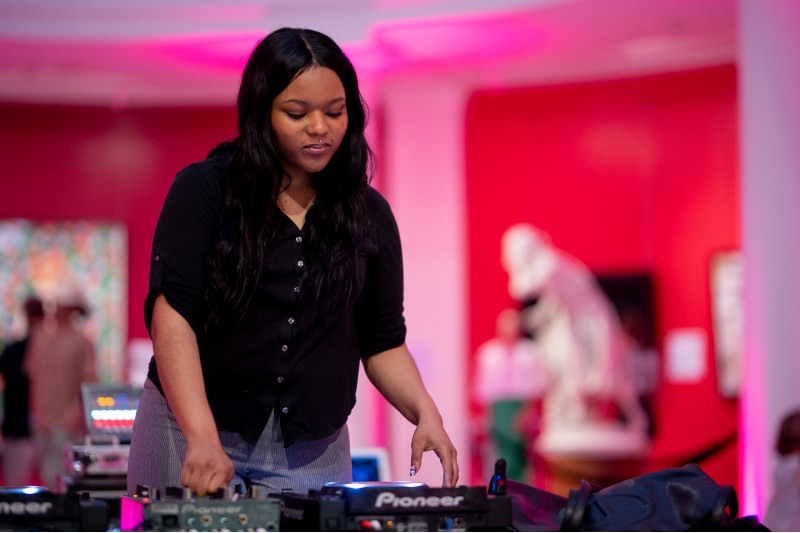 After AK, the crowd gathered in the auditorium to watch Kesswa’s recent experimental short film, The 12th House, in which she directs, produces, and stars. Kesswa is a Detroit-based singer and a founder of Jewel Tones, a Black-women-led platform that seeks to support emerging femme, trans, female, and non-binary artists. The 12th House is an Afro-surrealist story that follows an artist played by Kesswa who is contemplating her place as an artist in a capitalist society, with the film soundtracked by her 2019 song "Contemplate"

After The 12th House, a blue light colored the stage and the audience was told we were entering phase two: a heart-opening meditation. With hearts suitably opened, Kesswa made her way out and performed her songs “Open” and “Contemplate" from the Soften EP. It was magical.

Ann Arbor native Shigeto and Tammy Lakkis closed out Feel Good Friday with a DJ set. Lakkis recently recorded a live performance at Spot Lite in Detroit for the University Musical Society, which is available to stream for free through June 13, that focused on her singing and dance-floor friendly tunes. But the set she and Shigeto spun worked more like a soundtrack for the artwork. The many voices populating the museum evoked something akin to white noise when paired with the experimental sounds Shigeto and Lakkis explored. Moving seamlessly between ambient and techno, their music drifted throughout the museum's first floor, which was bathed by the sunset's golden glow.

No bad luck was detected on Feel Good Friday.