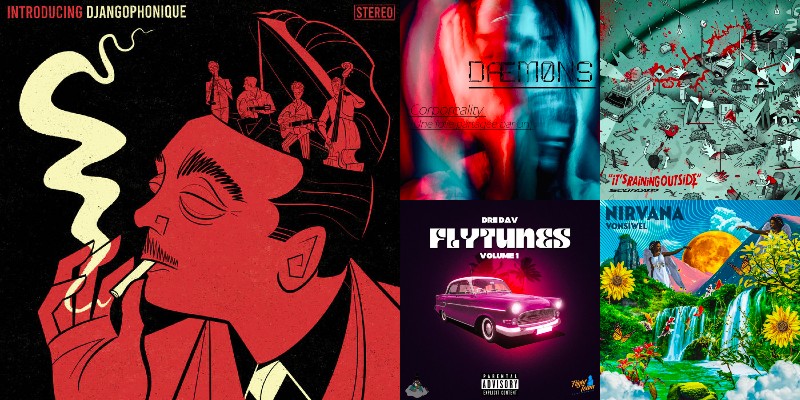 This week features hot-club jazz from Djangophonique, pop-punk by Seaholm, hip-hop via Dre Dav, R&B (and more) from Von Siwel, and prog-metal by DÆmons.

Djangophonique, Introducing Djangophonique
Django Reinhardt was a Romani-French guitarist whose work in the 1930s and 1940s was so influential that a whole subgenre of jazz was named after his style. Ann Arbor's Djangophonique built its sound—and name—on Reinhardt's "gypsy jazz," which has delightful ebullience even when a tune is in a minor key or played at a slower tempo. Introducing Djangophonique is the quartet's debut studio release, following up 2020's live album Jazz Du Jour, which was partly recorded in Ann Arbor's Blue LLama Jazz Club. ("What Is This Thing Called Love?" "Dream of You," and "Just a Gigolo" are the only carryover tunes from the live album to get studio interpretations on Introducing.) While Andrew Brown (lead guitar), Tyler Rindo (clarinet), Zach Croft (rhythm guitar), and Jorian Olk-Szost (bass) don't stick to Reinhardt-era tunes—for instance, they do a racing version of Willie Nelson's "On the Road Again"—this tight and terrific band does stay true to Django's instantly accessible and loveable gypsy-jazz sound. (And while Introducing Djangophonique's "Funk 39" doesn't musically recall James Gang's "Funk #49," my brain would like to think the band was giving a nod to that Joe Walsh-penned jam and that the group might tackle it in the future.)

Seaholm, It's Raining Outside
After four years of silence, Ann Arbor pop-punk trio Seaholm resurfaced in January of this year with the "Weatherman" single; four more songs followed over the past six months. Those five tunes are combined with five more to comprise It's Raining Outside, which evokes that really-well-played, vaguely emo-y, frequently witty style of pop-punk that was the rage about 10 to 15 years ago—which is not a criticism. All styles of music are ripe for revival and Seaholm are deeply studied experts in this particular genre.

Dre Dav, FlyTunes Volume 1
It feels like Ann Arbor's Dre Dav releases a new song or video every time I blink — and I'm very blinky. The prolific hip-hop artist is back again with another full-length album, FlyTunes Volume 1, which showcases his NSFW lyrical powers on 14 mostly laid-back tracks. The man is also a chronic champion of the chronic, so have your lighters at the ready.

Von Siwel, "Nirvana," "Knockout," "Free Fall"
Ypsilanti's Von Siwel is a talented chameleon. I figured his new single, "Nirvana," and July 2021 single, "Free Fall," might give us a clue to his overall style: '80s-influenced R&B delivered by a sweet and pure voice that could fill the lead-singer position in a DeBarge reunion should El not be able to show. But "Knockout," Siwell's single from February 2022, is a horny pop-punk raver in the spirit of Machine Gun Kelly's recent interpretation of that sound. As far as I can tell, Siwell has only released these three songs so far, but if you're curious about how he might flesh out a genre-hopping set list, he's performing live at Unity Vibration Kombucha in Ypsilanti on July 16 along with Foedidit and Chill Place.