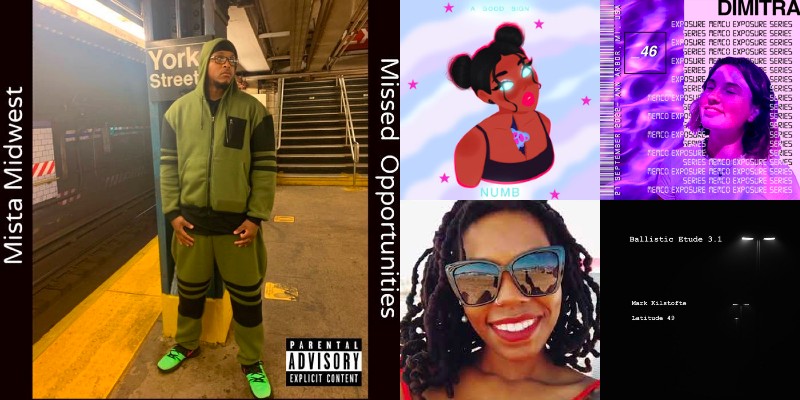 This week features hip-hop from Mista Midwest, contemporary composition by Latitude 49, electro-pop by A Good Sign, indie-R&B by Dani Darling, and the latest MEMCO Exposure mix by Dimitra.

Mista Midwest, Missed Opportunities
Five of the 16 tracks on the latest mixtape by Ann Arbor rapper Mista Midwest are labeled as freestyles, but it's hard to tell what's coming off the top of his head and what's through-written on Missed Opportunities—such is the gift of gab by the man born Matthew Freeman. His voice is thick and heavy though not quite gruff, and his authoritative flow isn't so much laconic as it is calculated and deliberate. I'm not sure who produced the beats, but there's a small Wu-Tang vibe on some of the tracks. (The late Nipsey Hussle gets a shout-out, too.)

Latitude 49, Ballistic Etude 3.1
This Ann Arbor new-music sextet takes its name from the 49th parallel border that separates Canada and the United States. It's also a nod to the origins of the band's musicians, who hail from both countries—and who HAIL!ed at the University of Michigan around the time the group formed in 2012. The single "Ballistic Etude 3.1" is one of several pieces in a series written by Mark Kilstofte, who won Latitude 49's 2016 Call for Scores, and the piece is dedicated to the late U-M professor and composer William Albright. Max Geissler (cello), Andy Hall (saxophones), Andy Hudson (clarinets), Jani Parsons (piano), Chris Sies (percussion), and Timothy Steeves (violin) attack Kilstofte's piece with the same energy as the composition's inspirations: the comic-opera Orpheus in the Underworld if it was rendered a Hollywood action movie.

A Good Sign, "Numb"
Ann Arbor's Kierstin Jackson, who records under the name A Good Sign, is back with her fifth single, and it's a big step up from last year's "Taste of You." Where that song had an unsteady vocal and the stripped-down music sounded more like a demo, "Numb" is a winning electro-pop single that lands somewhere between an '80s chart hit and a shy indie ballad. The lusher production suits her voice in a more supportive way, and the hook is an earworm. (And pertinent for all you library fans: She also hosts The Girl With the Bookworm Tattoo podcast.)

Dani Darling, "Trying"
After releasing numerous well-received singles and EPs that straddled R&B and dreamy indie-pop, as well as performing all around Michigan, Ann Arbor's Dani Darling was diagnosed with multiple sclerosis in 2021. At the time, she thought her career might be over, or at least put on hold, but she started to gig again this year, and is topping off her comeback with a swaying, atmospheric new single and video, "Trying." She talked to the Grand Rapids-based blog Local Spins all about her terrifying ordeal (podcast and article).

Dimitra, Exposure Mix 046
The Michigan Electronic Music Collective (MEMCO) is the gift that keeps on giving. Whether it's the U-M student group's radio show on WCBN, the inclusive parties the group throws in area clubs, or this steady stream of Exposure Mixes, MEMCO highlights so much great music. Dimitra's mix starts mellow and downtempo, moves into the poppier side of deep house, and closes with club bangers that will keep dancers twirling into the night.