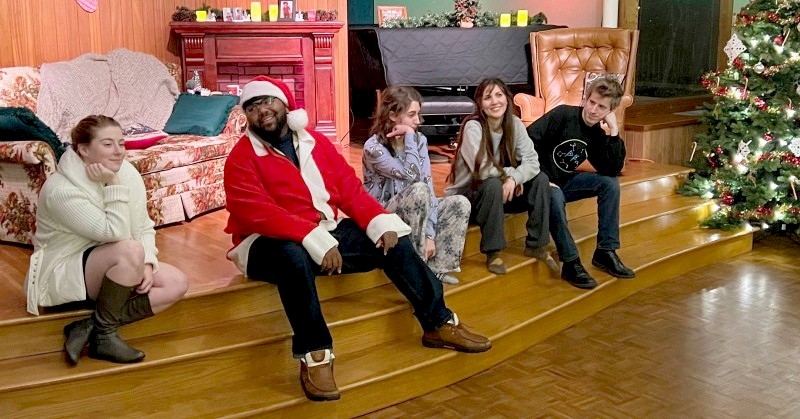 The prospect of seeing friends from high school, after a years-long separation, always feels fraught. Will it be awkward? Will they judge you? Will you judge them? What will you talk about? Will you somehow ruin perfectly contained, long-packed-away memories?

This anxiety’s at the core of Joseph Zettelmaier’s new play, First Snow, now having its world premiere production via The Penny Seats Theatre Company at The Stone Chalet Event Center in Ann Arbor.

Evan (Michael Alan Herman), a Chicago-based photographer, vanished from his small hometown shortly after his high school graduation, when both of his parents died in a car accident. In the 10-year interim, he’s eschewed all contact with his best high school band buddies Lisa (Josie Eli Herman) and Bob (Jonathan Jones).

But music teacher Lisa—with whom Evan was once romantically involved—finally tracks him down to invite him to a holiday party in her home, which she shares with her young daughter, Natalie (Patrice Linman); and because Evan is working on a photo series about holiday celebrations, the invitation dovetails with his work. What Evan doesn’t know, though, is that he and Bob—and Bob’s wide-eyed, former-popular-girl wife Nora (Celah Convis)—are the only ones on this party’s guest list.

Not that this is malevolently ominous. The three friends simply have things they need to say to each other in order to move forward.

The play, directed by Amanda Buchalter (with a run-time of just over 90 minutes), uses narrative shorthand —inside jokes, shared memories, etc.—to establish the three friends’ former level of intimacy (while also integrating outsider Nora, so the audience can get some key blanks filled in).

But unlike films, which can simply insert fleshed-out flashbacks for context, a play often relies on these inter-relational conventions to hint at the characters’ previous closeness—and thus, ideally, we’ll feel the loss of these connections more acutely. Put another way: If you think about this three-way friendship as an iceberg, the play shows us the above-the-surface tip, but we somehow have to get a sense of the way, way huger mass beneath the water.

That mass largely stays hidden, however, so that when First Snow’s revelations come—and you can see one of them coming from a mile away—we’re only invested at the surface level.

Yes, Zettelmaier is a polished, accomplished playwright, so he anticipates (and offers answers to) many questions that will inevitably arise in the playgoer’s mind. But some central ones couldn’t be batted away so easily for me, including: Do high school loves really retain their potency and relevance over the course of a decade of profound changes? (I’ll admit, I may simply have no romance in my Grinchy soul.) Plus, even if Evan, as a minor, was swept away in a moment of tragedy, wouldn’t he be desperate for the comfort of friends, even from afar, and make every effort to contact them? And can anyone be truly elusive for long in our digital age?

Again, the play provides answers. I just wasn’t wholly satisfied by them. And because I’m a, well, let’s say “seasoned” local critic, and Zettelmaier is a prolific and successful local playwright, I’ve probably now seen more of his work produced than that of any other dramatist. So I left First Snow reflecting on this: I think Zettelmaier shines brightest when he works not in quiet, contemporary domestic dramas but when his voracious curiosity and imagination instead take us to another time, or into the dark corners of our collective myths. It’s in these off-kilter realms that you more palpably feel his excitement for the material, and often, that electricity is infectious.

All that having been said, The Penny Seats’ production of First Snow is characteristically sound, and the Stone Chalet, thanks to several tweaks (including screens on the windows), has become better-suited over time for theatrical presentations—though a perpetually on-stage piano is now The Penny Seats' equivalent to the defunct Performance Network’s pole: an object that must always be worked in or worked around.

In the end, First Snow is like a lot of holiday parties you’ll attend this year. It’s fine, and it has moments of charms, but it doesn’t particularly stand out, either.