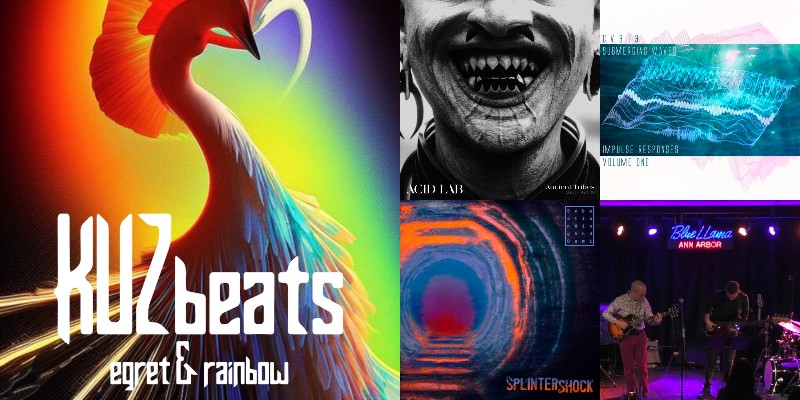 This week features soundtrack electronica by KUZbeats, dub techno from cv313, jazz from Alex Anest, and drum 'n' bass from the AGN7 Audio label and Sebastian Wing and Gami.

KUZbeats, Egret & Rainbow
Michael Kuzmanovski is KUZbeats, a project he describes as a "driving, cinematic, and genre-bending collection of songs" that he writes, performs, and produces. While that applies to all the music he's put out the past few years, most of those have been singles except for the 2021 album dear leader, so you don't necessarily process the variety and scope of his writing if you don't listen to all these individual tracks back to back. But Egret & Rainbow is another full-length recording, which highlights his wide purview of influences, styles, and approaches, which ranges from '80s synth pop and world music to hip-hop and electronic psychedelia. In some ways, the record doesn't necessarily flow all that well, but I think that's by design to a certain extent. The 16 tracks sound like soundtrack pieces, each created to fit a scene, not made to unify the album. Kuzmanovski's primary instrument is drums, so all the tracks have strong rhythmic bases inspired not only by his catholic tastes in music but also his world travels. It would be amusing to flip the script and see if a filmmaker could retrofit a movie to reflect the music on Egret & Rainbow, but for now we'll just have to slap on some headphones and engage in some cinema of the mind.

cv313, submerging waves [impulse responses] volume one
Stephen Hitchell made his name as co-founder of the dub-techno label Echospace as well as a recording artist, including his cv313 project. While much of his career was spent in Chicago and Detroit, in the past few years he's settled in Ann Arbor, and in addition to reissuing much of Echospace's excellent catalog on Bandcamp, continues to create new music. This release is unique in that it's as much a demonstration of the sound tools Hitchell used to create this EP's three tracks as it is about simply listening to songs. The idea is that musicians can buy these custom-made sounds from Hitchell and create their own "submerging waves." There's a spacey performance of the title track recorded live at the 2022 Movement festival, but the other two tracks are more minimalist, beat-driven dub techno. All three tracks were made with the same 100 impulse responses cv313 used on his debut album, Dimensional Space. (The history behind that record is worth a read.)

Alex Anest's Electric Four, Live at the BLUE LLAMA 11.22.22
Alex Anest Trio, The B Room
Alex Anest is an Ann Arbor jazz guitarist and educator who plays in a variety of small-group configurations—three of which you can hear in a flurry of recent uploads and a soon-to-be-released album. The first volume of Live at the Blue LLama by the funky Anest, Corey Kendrick, and Gayelynn McKinney Organ Trio was released on Bandcamp and CD, but for the second volume the guitarist is raising money on Kickstarter for a double-album, vinyl-only release. (He's not planning on putting it on streaming either.)

Finally, The B Room is a straight-ahead and swinging trio EP recorded at the now-shuttered Backseat Studios in Ann Arbor. The three songs feature bassist and Blue LLama creative director Dave Sharp and drummer Jesse Kramer on the drums, and while it was recorded in 2018, I only noticed it on Bandcamp recently.

Acid Lab, Ancient Tribes EP
Data General, A Few Iterations
Ypsilanti's AGN7 Audio label is deeply devoted to all offshoots of drum 'n' bass, the hyperkinetic snare-dominated, bass-booming style of electronic music that came out of Britain more than 30 years ago. (We interviewed label chief Aaren Alseri last summer.) While AGN7 Audio is local to Washtenaw County, the artists it releases are from all over the world, and that's the case with these recent releases by Acid Lab (New York) and Data General (Germany).

Sebastian Wing and Gami, "Splintershock"
Should AGN7 Audio be looking for local talent, I would like to suggest Sebastian Wing, aka Sam Gillies, an Ann Arbor-based producer "Splintershock" is a collaboration with a fellow musician named Gami, and the single hints at what's to come on Wing's forthcoming album: drum 'n' bass with a tinge of EDM and even some vocals. (You can hear more of his work over on Soundcloud.)