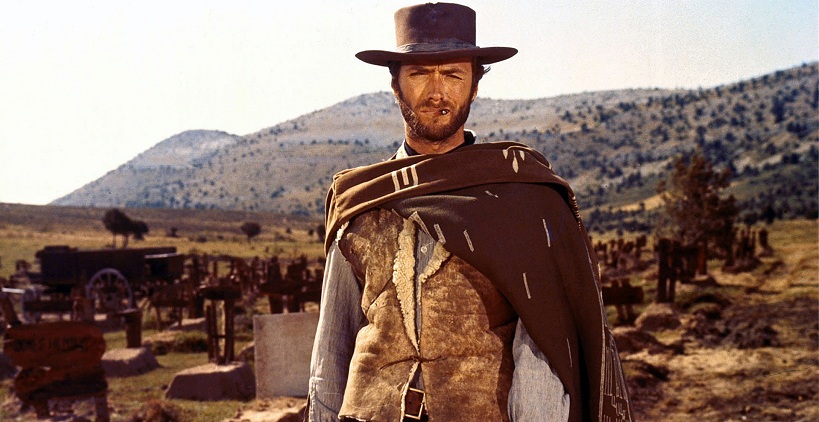 The Good rides into the Michigan Theater on July 31 and August 2.

The Michigan Theater is presenting the "Kerrytown Market & Shops Summer Classic Film series" – and it’s a great way to beat the summer heat with fresh popcorn, the theater’s classic Barton Organ pre-show serenade, as well as unarguable film classics in an equally classic historic auditorium. I’ve seen every one of these films (more than once) and they’re all worth seeing again—especially on the big screen. Here’s the list, and my take on the best reason to see them (again and again):

Funny Face (Sunday, July 24 at 1:30 pm; Tuesday, July 26 at 7:00 pm)
You can never go wrong watching Fred Astaire dance (as well as act and sing a little) or Audrey Hepburn in trademark pedal pushers. Not enough? Try direction by Stanley Donen with music by George and Ira Gershwin. That’s Entertainment!

The Good, the Bad, and the Ugly (Sunday, July 31 at 1:30; Tuesday, August 2 at 7:00 pm)
A serious serial toss up: The score, Eli Wallach, the Mexican standoff in Cinemascope, or Clint Eastwood finally pulling out his trademark cheroot. Sergio Leone set the bar so high in making this one, the tumbleweed genre might as well be retired. They just don’t make westerns like this anymore.

Fargo (Sunday, August 14 at 1:30 pm; Tuesday August 16 at 7:00 pm)
Arguably the Coen brothers’ best: A pregnant cop utterly unafraid of both killers and the harsh Minnesota landscape? You betcha! Oh…and you’ll never look at a wood chipper quite the same way again.

Metropolis (Sunday, August 28 at 1:30 pm; Tuesday, August 30 at 7:00 pm)
Fritz Lang’s pioneering sci-fi silent feature, with its Art Deco- and German Expressionist-inspired cityscapes is the only movie to out Blade Runner “Blade Runner”; and wow, is that she-bot still intense even after all these years.

To Catch A Thief (Sunday, September 4 at 1:30 pm; Tuesday, September 6 at 7:00 pm)
Easily one of the classiest of the master of suspense: Monte Carlo in the 1950s is divine. But go to watch Cary Grant and Grace Kelly in incandescent Technicolor. It’s a good movie, and it’s Hitchcock and all, but it’s really about Grant and Kelly’s unparalleled luminosity on screen.

Casablanca (Monday, September 5 at 7:00; free admission for students with valid ID)
Let’s not kid ourselves: “A kiss is just a kiss, a sigh is just a sigh….” but not when Bogie and Bergman smolder as time goes by. The Michigan Theater’s annual Fall kick-off (and for good reason), is ... er, reason enough. But see it because watching true love outwit really, really bad guys never, ever grows old. Strike up “La Marseillaise!”

Amy Cantú is a Production Librarian at the Ann Arbor District Library where she enthusiastically selects classic movies for the DVD and Blu-ray collections.

The Kerrytown Market & Shops Summer Classic Film Series runs all summer long, on Sundays at 1:30 pm and Tuesdays at 7 pm at the Michigan Theater.

Not more than one of these

Not more than one of these movies have been remade. Because they are as close to perfect as film can get. The Good, The Bad and The Ugly, though. I would like to create a fantasy cast list.