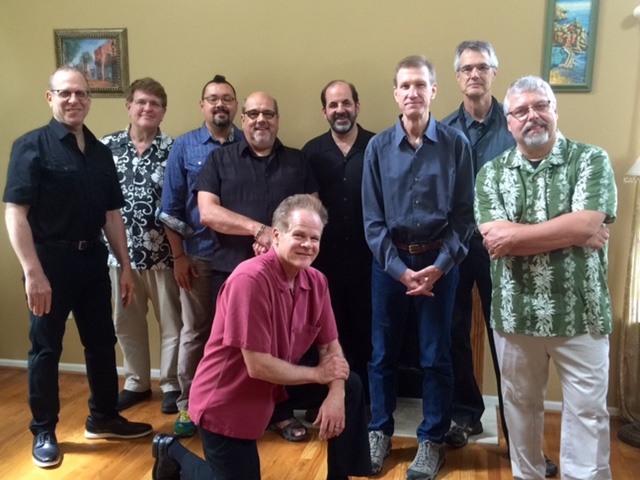 Lunar Octet plus one.

This is the typical time of year for family reunions. In popular music, bands break up after short periods of time and rarely get back together for various reasons, not the least of which is a limited repertoire.

In one form or another The Lunar Glee Club or Lunar Octet has the distinction of being together for three decades, but they've recently been in a reunited cycle several years running. Band members have lived in several locales across North America after establishing their home base in Ann Arbor. Now local listeners will have another opportunity to hear this exciting instrumental ensemble do their thing -- fusing jazz, Latin and funk musics.

When they formed, the group was dubbed The Lunar Glee Club but changed their name so as not to be confused with a vocal band. Frequent appearances at The Apartment Lounge in the Huron Towers, as well as other nightclubs and the Montreux/Detroit Jazz Festivals, firmly established their style and sound to an audience that enjoyed their contemporary stance of presenting all original material.

Definite comparisons were made to artists that also influenced the group – Chick Corea, the Brecker Brothers, Weather Report, Steps Ahead, and The Yellowjackets. Fueled by the unique compositions of bassists Dan Bilich or Dan Ladzinsky, and especially saxophonist Steve Hiltner, the ensembles were driven rhythmically by drummer Jon Krosnick and percussionists Dave Mason and Aron Kaufman. The Lunar Glee Club and Octet stood out in a small field of large Michigan based jazz oriented groups.

Unfortunately for the future of the Octet, employment demands scattered members across the continent. Krosnick headed for Columbus, Ohio working at Ohio State University, where he formed the fusion trio Charged Particles, then moved to Palo Alto, California and Stanford University to become a vital cog in social research and their Communications Department.

Hiltner headed for North Carolina and keyboardist Mark Kieswetter moved to Toronto, while their next pianist, Craig Taborn, based in New York City, has become one of the more prominent musicians in the world. Original trumpeter Kalle Nemvalts resides in San Francisco, while Kaufman, saxophonist/flutist Paul VornHagen, and electric guitarist Sam Clark remain in Ann Arbor.

Over the years, the LGC/8 have used several bassists, including Bilich and Ladzinsky, David Stearns (recently with Laith Al-Saadi) and currently Jeff Dalton. Also included in the reunion bands will be trumpeter Brandon Cooper and percussionist Olman Piedra, both bassists, and composers Bilich and Ladzinsky from the initial Lunar Glee Club.

Paul VornHagen was in the original line-up of The Lunar Glee Club as well as a later and current version of The Octet. He recalls the early days in 1985: “We got together in Jon Krosnick’s basement and wrote our own tunes. From the beginning it was with this eclectic mix of Afro-Cuban, Afro-Pop, and rock rhythms. And The Apartment Lounge was an important part of the Ann Arbor scene, as they had music several nights every week. One night Freddie Hubbard came in - that was memorable.”

VornHagen noted a change between the two groups. “The Glee Club performed for many years, but The Octet formed after a break," continued VornHagen. "It became more of a jazz group per se with some Brazilian influences, mambos, cha-chas, be-bop, and Steve Hiltner contributing as a prolific composer with beautiful harmonic sound.”

Via e-mail from California, Krosnick elaborated on the initial thrust of the participants and ideas. “If the band had simply composed, rehearsed, and never performed publicly, everyone would have been happy. But the music ended up being too fun to keep to ourselves.”

“The original vision for the music came about during a conversation at Fuller Pool between Dan Ladzinsky and Aron Kaufman," continued Krosnick. "They envisioned a sound that left a lot of open mid-range sonic space by having no keyboards, and a guitarist (Sam Clark) that played single notes and no chords. During early rehearsals, musicians would bring very skeletal ideas - in fragments really - and the entire band would compose the song together in real time.”

If their stirring performance in front of a full house at the 2016 Michigan Jazz Festival (hosted by Schoolcraft College in Livonia) is any indication, fans and listeners are in for a treat. They are refining the old arrangements and reviving the spirit that made the Lunar Glee Club and Lunar Octet unique unto themselves -- and to everyone.