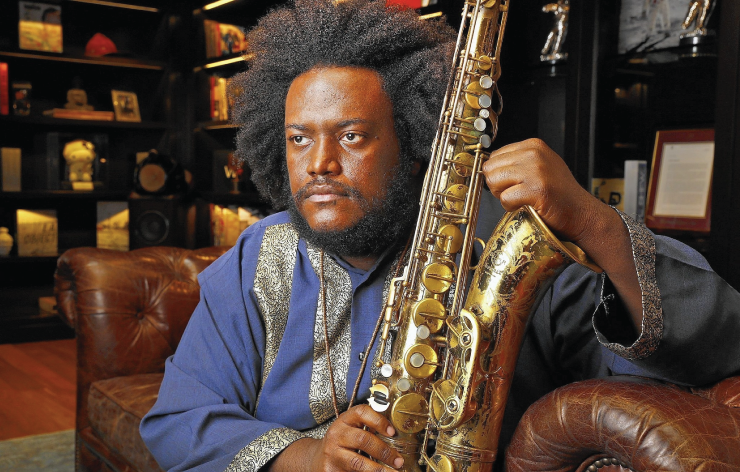 Kamasi Washington toots his own horn at the Michigan Theater September 30.

There was a lot happening on Kendrick Lamar’s 2015 album To Pimp a Butterfly, but Kamasi Washington’s saxophone still stood out, causing him to be touted as “the high priest of sax” and “jazz’s newest savior.”

Washington seems unfazed by these dramatic new labels. The 35-year-old Californian has been playing jazz saxophone for decades—since he was 13, to be exact, when he picked up his father’s saxophone, left lying in the living room. As a sophomore at UCLA, Washington toured with Snoop Dogg and joined the orchestra of Gerald Wilson.

Over the next twenty years, Washington recorded, performed and toured with dozens of musicians and quietly formed his own band, The Next Step, comprised of anywhere between 10 and 15 people at a given time. The Next Step, along with a string orchestra and a full choir, backed Washington on his first solo album, released last year, and appropriately titled The Epic—it’s three discs and 172 minutes long. The Epic received the inaugural American Music Prize, which is awarded to the best debut album of the previous year in any genre.

Washington uses his music to get messages across, saying that the “whole point” of playing music is to convey a message. In his case, these messages are often political, supporting the Black Lives Matter movement and praising one of his early heroes, Malcolm X. An entire track on The Epic is a eulogy to the black leader.

“Music and politics are so connected,” Washington said in an interview in May. “Politics are policies that govern people. Music is the expression of thoughts that govern ourselves. It should go hand in hand, because one definitely affects the other.” Washington is influenced by early jazz pioneers like Gerald Wilson and John Coltrane, but also strives to maintain his own sound in his work and his performances, saying that he loves to play jazz music because there is always something new to try with it.

Washington’s live performances are similar to that of his album: epic. His stature and wardrobe choices (he wore a bright blue dashiki at a recent performance in Toronto, and a floor length purple coat at another) would make him eye-catching even without his mind-blowing saxophone performances. At his September 30 performance at the Michigan Theater, The Next Step will be with him, making for what will surely be a crowded and lively stage. Washington says that he is on a “lifelong quest discovering the many wonders of music”—the opportunity to join him on this journey, even if just for the night, is certainly one not to be missed.

Elizabeth Pearce is a Library Technician at the Ann Arbor District Library. Clarence Clemons is her favorite saxophonist, but Kamasi Washington is a close second.

Kamasi Washington performs at the Michigan Theater on Friday, September 30 at 8 pm, presented by UMS. Tickets range from $24-$58 and are available here.