Preview: Joe Hertler & The Rainbow Seekers at the Blind Pig 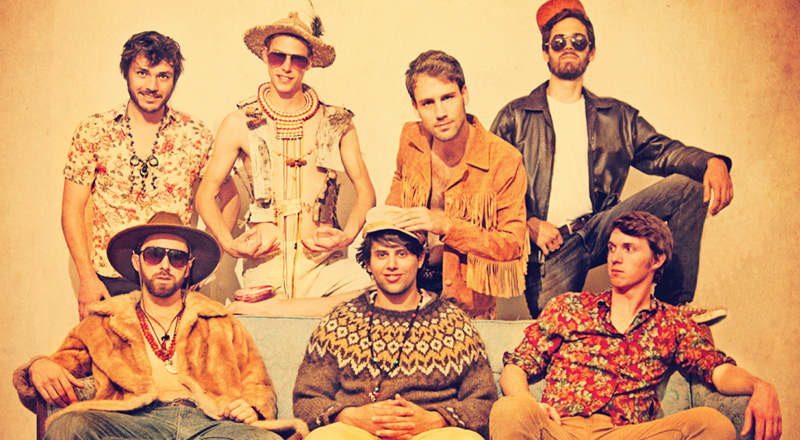 Joe Hertler & The Rainbow Seekers were just in Ann Arbor a couple months ago to play a rousing show at Sonic Lunch, and they’ll be making the trip across the state again to play the Pig on October 21. Spread out all over Michigan, from Kalamazoo to Lansing to metro Detroit, all the band members have day jobs and then travel together most weekends to perform. It makes for a hectic lifestyle, but they don’t seem to mind. In an interview this summer, Hertler poked fun at the popular phrase, “If you do what you love, you’ll never work a day in your life.” “It’s bullshit,” he said. “We work our asses off, and it's hard work, but we think it's worth it."

The band boasts of their ability to “make a sprightly young groove doctor out of anyone,” and with their folksy, funky, Motown-like jams, it’s a promise that they can uphold. The seven-man band traces their roots back to 2008, when lead singer Joe Hertler dropped out of music school at Central Michigan and started trying to put together his own band. He met guitarist Ryan Hoger and bassist Kevin Pritchard in Lansing in 2010 and with that, the Rainbow Seekers began to assemble. Saxophonist Aaron Stinson, violist Joshua Holcomb, and drummers Micah Bracken and Rick Hale all felt the pull of the rainbow and joined the band over the next four years.

Joe Hertler et al believe in providing their audiences with a true “experience,” which is why they don’t only play songs from their albums, the most recent of which, Terra Incognita, came out last year. Instead, they play a mix of old and new material, and improvise on stage, too. Typically dressed in bright clothing and costumes—Stinson sometimes puts a giant sunflower in his sax—Hertler and the Rainbow Seekers instill their infectious energy and good cheer into the audience, often accompanied by a giant inflatable rainbow that they drag on stage with them. Audience members are always encouraged to dance, clap and sing along. “Having a good time is contagious, and we try to spread that,” Hoger said earlier this year. At their Sonic Lunch performance this summer, they got almost everyone up to the front of the stage to dance to “Future Talk,” one of the best songs off of Terra Incognita.

The band is planning to release as-yet-unnamed new album, which Hertler claims will be their best yet, in early 2017.

Joe Hertler & The Rainbow Seekers are playing at The Blind Pig on Friday, October 21. Doors are at 9:00 pm. Tickets are $15. Ages 18+. For more information, visit http://www.blindpigmusic.com/ .