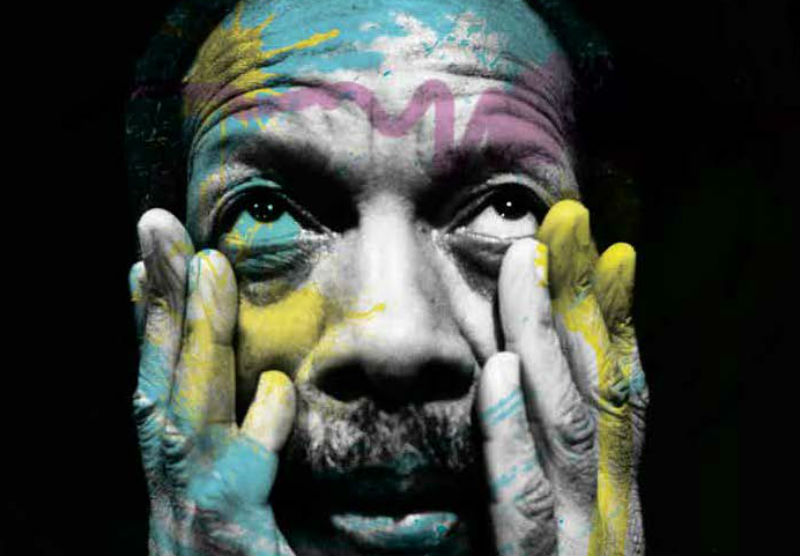 Ornette Coleman, the least understood person in the room.

Ornette Coleman’s music can be inscrutable to unprepared ears. The jazz giant, who died in 2015 at 85, developed a music theory he called “harmolodics.” It’s a style that goes beyond the “free jazz” tag that frequently accompanies Coleman’s name -- even if the alto saxophonist/trumpeter/violinist did release a genre-defining record under that name in 1960 -- and relies as much on a philosophical idea as a musical one. Simply put: Harmolodics is about race.

Harmolodic theory can baffle experienced musicians, too. Even guitarist James “Blood” Ulmer, who played with Coleman for 6 years, said, “I don’t get it!” in a new book called Free Jazz, Harmolodics, and Ornette Coleman by Stephen Rush, professor of performing arts technology at the University of Michigan.

But Professor Rush, who has taught at U-M for more than 30 years, breaks down Coleman’s complicated theories in a series of free-flowing interviews with the legendary composer that clarify harmolodics’ underlying philosophy. Plus, the book’s in-depth musical examinations will help students absorb the style into their own playing.

In addition to being a U-M prof, keyboardist Rush has a staggeringly wide body of work that includes everything from chamber jazz and opera to digital music and sound installations, and he explores harmolodics (and all sorts of other styles) in his Naked Dance quartet.

To celebrate the release of Free Jazz, Harmolodics, and Ornette Coleman, Rush is doing two area readings: Wednesday, December 7, at Literati (Ann Arbor) and Sunday, December 11, at Trinosophes (Detroit). Both are at 7 p.m. (For the Literati event, Rush is joined by Jason Corey, associate dean and associate professor of music at the University of Michigan, who just released a new edition of his book Audio Production and Critical Listening: Technical Ear Training.)

Rush answered questions over email about Coleman and the book, and he gave Pulp a list of recommended recordings that illustrate harmolodics at its finest.

Q: You just wrote a whole book about harmolodics, but if you had to give a concise description to a non-musician or budding jazz fan, how would you describe it?
A: It is all about race. The music theory part of it is a bit complicated if you don't understand transposition, so let's just say this: a C [note] can really equal a D [note]. And before you object to it -- realize what that means. From a race perspective, it means a white person equals a black person.

Q: The discussion about the role of the piano in Coleman's music opened my ears in a way I hadn't considered. If I'm understanding it correctly, he's relying on the other musicians to provide something akin to what the left and right hands can do for each other on a piano -- layering notes and chords -- but he's trying to do it with an entire band listening and responding as if they were the two hands on a piano. Did I get that right?
A: Actually, to make that argument would be horribly Eurocentric. Putting piano again at the center of the jazz sound. I never had a chance to ask him, but I suspect that the piano in those early recordings by King Oliver and Louis Armstrong was a substitute for a banjo! And there is a lot of banjo on those early recordings! Ornette's music, and the free jazz that follows, is always about collective improvisation. He thought that pianos tamp down the band way too much because of their harmonic tendencies. I completely agree -- especially as a pianist! Paul Bley and Keith Jarrett both have wonderful moments where they are really horizontal players rather than vertical players. The focus for them? Lines not chords. This is in polar opposition to the way we are taught, by the way.

Q: Sorry, I didn't mean to imply that the piano would need to be in the center of the jazz sound; more in how a piano player can, as Coleman says in the book, "Play all the notes you want ..." all by himself, whereas Coleman is having a band do it, which allows them to bounce off each other in collective improvisation rather than the pianist making all the choices himself. And which is why the piano generally gets in the way in Coleman’s music.
A: Cool. You are more spot-on with the piano question than I let on.

Q: At the end of the book’s first part, in your "Reflection" section, you comment that the interview we just read is Coleman's most concise explanation from a musical standpoint. But you end the section by saying, "Ultimately, these are issues of race and universal human freedoms." I know you expand on that in the book, but can you give a quick overview of what that means?
A: Well, this loops back to my answer to question one. Some people will get this book and want just the musical explanation for the Ornette approach. All of the talk about musical transposition, C equals F sharp, or whatever. But it all boils down to one essential element: human equality. To miss that piece of the puzzle, which people have been doing, well, forever, is to miss the most beautiful point of all. This music is about freedom. Not just musical freedom. Freedom.

Q: Is the driving theory behind all of Coleman's music to reinforce people's rights to make their own choices and live freely and as they see fit but with some general outlines -- laws? ethics? -- about what that freedom means if it impinges on someone else's freedom -- or musically speaking, not following the framework of the composition?
A: Notice that over and over, Ornette talks about trying not to push somebody down, or as he says quite graphically, "I don't want to kill anybody.” So, he is talking about a musical situation where everyone has equal contribution. It is a succinctly Africanist approach. European music works from the top down, usually. Or certainly after the Renaissance. There is a melody and there is a support harmony. Rhythm is a result of the other materials. In [Coleman’s] music, it all works together -- hence the term "harmolodics.”

Q: As good as you are at translating Coleman's theories for other musicians -- and everyday jazz fans -- to understand, was there any idea he discussed that you could not wrap your head around, no matter how much you asked him to explain? If so, please share.
A: Not really. But I attribute this to his ability to figure out how to talk to me and how to communicate to me. Inadvertently, you have put your finger on a major point here: There is a kind of autobiographical piece to this book that I'm not open to confessing, [not] in the book, at least. Often I am the least understood person in the room -- and guaranteed, Ornette was always the least understood person in the room. I loved reaching out to him and digging under the hood, and his clarifying questions, which are so easy to see along the way. It made the job easier after the first hour. So, the next five or six were easy.

Q: What are five songs -- or albums, if you prefer -- that are your favorites in the Coleman catalog and why?
A: Let’s go with: “Kathelin Gray” -- It’s just plain pretty, it’s a gorgeous ballad, and completely harmolodic; not really “in a key” at all.

The entire Song X album, of course, is very important -- Kind of Blue or even Louis Armstrong’s “West End Blues.” It really defines harmolodics. Virgin Beauty is a really fun album -- it even has Jerry Garcia on it! There are ballads, fun funk grooves, hip-hop grooves, “jazz,” etc. Great intro to Ornette. His piece “Peace” from Shape of Jazz to Come is a quintessential free-bop tune. A great starter as well.

Dancing in Your Head is a fantastic “party album” -- an “out funk groove” with Morocco’s Master Musicians of Jajouka? What a blast! I’m just nuts about Tales of Captain Black, which is listed as guitarist James “Blood” Ulmer’s album. It’s super high in energy, “Blood” is a monster, but the whole band is over-the-top virtuosic. Tight meets loose. Jazz? Rock? I don’t know. It just is.