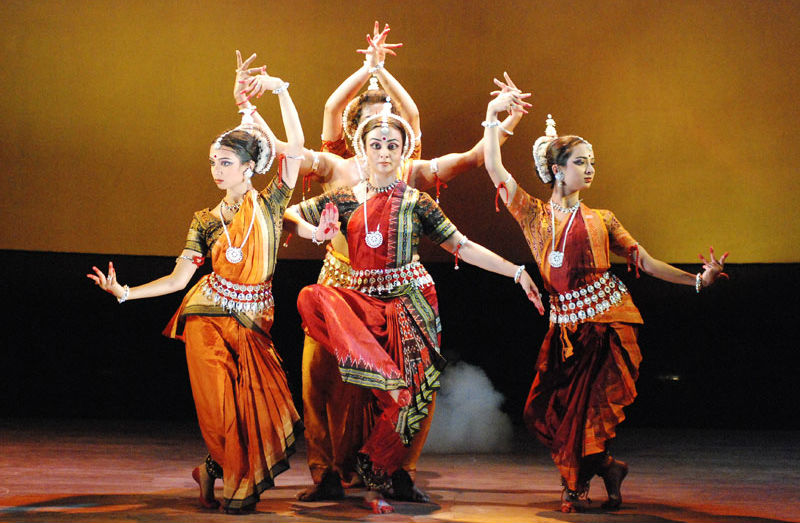 The Rasa Dance Festival will present a new work based on the Odissi dance style, which is marked by sculptural poses and a fluid upper body. Pictured left to right: Ishika Rajan, Sreyashi Dey, and Kritika Rajan.

With this prayer, the dance begins:

When we at Akshara decided to produce the India-inspired, month-long, multi-arts Rasa Festival, a classical dance segment was planned as a key event because it occupies a pre-eminent position in the arts landscape of India. Rasa Dance Festival runs September 23 and 24 at Riverside Arts Center in Ypsilanti. (As a prelude to the festival, we will present a performance at the Ann Arbor District Library on September 21.)

Shiva dances in "Rudra Tandava" or the dance of destruction in an aureole of fire, creating wild thunder storms in the universe, even shattering the Sun, the Moon and stellar bodies with his matted hair, marks of ash on the forehead, trident and drum. He lifts his left leg, balancing over a demon of ignorance, with snakes crawling over his arms, legs, and braided hair that depicts egotism. His upper right hand holds an hourglass drum or "dumroo" standing for the male-female vital principle, while the lower gestures us to "be fearless." A skull on his head depicts conquest over death. Goddess Ganga, epitomizing the holy river, sits on his head. His third eye represents omniscience, insight, and enlightenment. Locks of matted hair, thick like luxuriant rain forest, stir never ending cyclones. Blazing infernos originated from his third eye rage like wild fire, engulfing everything in the aureole of fire.

The "Lasya" or the gentle form of his dance, known as "Aananda Tandavam" or dance of bliss, is associated with the creation of the world, in the cycle following its total destruction. Shiva's two different cosmic dances take place in one's "Chidambaram" or in the sky of the mind, portrayed as the center of consciousness situated at the altar of one's heart.

Classical dances in India owe much to the mythology of the cosmic dancer. The earliest mention of codified dance is found in the Natyashastra, the authoritative treatise of performance (dance, drama, music), which is attributed to sage Bharata Muni and was first compiled between 200 BCE and 200 CE. The fundamental grammar of all the eight official styles of Indian classical dances is derived from this text.

The eight classical dance styles of India are from the different regions, each infused with unique culture, language, songs, stories, and costumes, reflecting the fragrance of the land it originated in. However, all the styles share a number of common features in their technique. The repertoire consists of primarily two kinds of dances: Nritta, or rhythmic “pure” dances that elaborate on musical passages and complex rhythmic patterns played out on percussion instruments; and Nritya, or storytelling expressional dance pieces. All the dance styles have an elaborate language of hand gestures with specific meanings, movements of the eyes, head, neck, body, and feet, creating an intricate language of its own.

Stories of Gods such as Krishna, Shiva, Rama, and of Goddesses such as Durga, Lakshmi, Saraswati, and Kali are narrated in the dances. Melodic structures of classical ragas and rhythmic patterns (talas) are used to create the accompanying music.

Historically, the regional classical dances have emerged from varied historical contexts, ranging from the dances of the devadasis, or women dedicated to the temples to offer dance service to the deities, to monks in monasteries, and to the dances of the courtesans in royal courts of the Mughal and other rules. 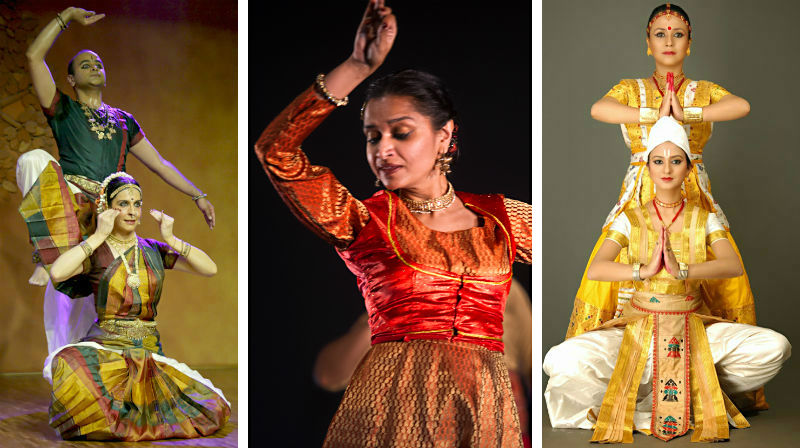 At the Rasa Dance Festival, we will present a total of five styles: four distinct styles of Indian classical dances and one style of contemporary dance. It will be a journey through India to experience the regional classical dance styles, each unique visually and in technique.

On September 23, we will begin the festival with a major new choreography in the Odissi style from the eastern Indian state of Odisha. This style is marked by sculptural poses from temple carvings, a fluid upper body combined with strong lower body movements, lyricism, and grace. The new work, presented by the Akshara dance ensemble, explores the commonalities and contrasts in the two dark divinities, Kali and Krishna, in an innovative choreography.

Earth will be presented by Srijan, an interpretation of Rabindranath Tagore’s poem Prithibi, in a contemporary style based on Uday Shankar’s creative dance style.

Courtyard Dancers from Philadelphia will present Find Metiabruz! in the north Indian style of Kathak, which originated in the nomadic storytellers’ performances and later in royal courts and is characterized by exciting rhythmic footwork. In this dance theater piece, Metiabruz, a forgotten corner of the city of Kolkata, is a metaphor for the habitations of poetry.

On September 24, Spilling Ink from Washington, DC will present Vishala/Expanse in the Bharatanatyam style from southern India, known for its dynamic, geometric spatial movements and strong expressive elements. Their performance of Ardhanareeswara celebrates the half-man, half-woman form of the Hindu god Shiva, seeking different perspectives within the heightened spiritual energy that emanates from meditating on this great God.

Akshara will also present a new dance theater work in the Odissi style called PanchaChitra, a new interpretation of Rabindranath Tagore’s classic work Chitrangada. This piece presents an entirely female perspective of a story from the epic Mahabharata and has been acclaimed for its innovative concept and treatment.

To conclude the festival, the Sattriya Dance Company from Philadelphia will present Dancing the Divine in the Sattriya style, a 600-year-old dance from the Vaishnavite monasteries of Assam, a state in northeast India. Detailed information on these performances, including video clips are available here.

The world of Indian classical dance is complex, dramatic, and exciting. The Rasa Dance Festival is bringing a rich offering of these dances to our doorsteps, right here in our community, inviting the audiences to immerse themselves in the sublime experience of Rasa --
aesthetic bliss!

Sreyashi Dey is a dancer and the president and artistic director of Akshara.

The Rasa Dance Festival runs September 23 (7-9 pm) and September 24 (3-5 pm) at Riverside Arts Center, 76 N. Huron St., Ypsilanti. Tickets are $25 per day ($15 for students); $40 for both days. Visit rasafestival.org for tickets and more info on the Rasa Festival in general. On September 21, the Ann Arbor District Library's downtown branch hosts "Rasa Yatra: A Journey Through India to Appreciate the Diverse Styles of Indian Classical Dance" at 7 pm. Free.