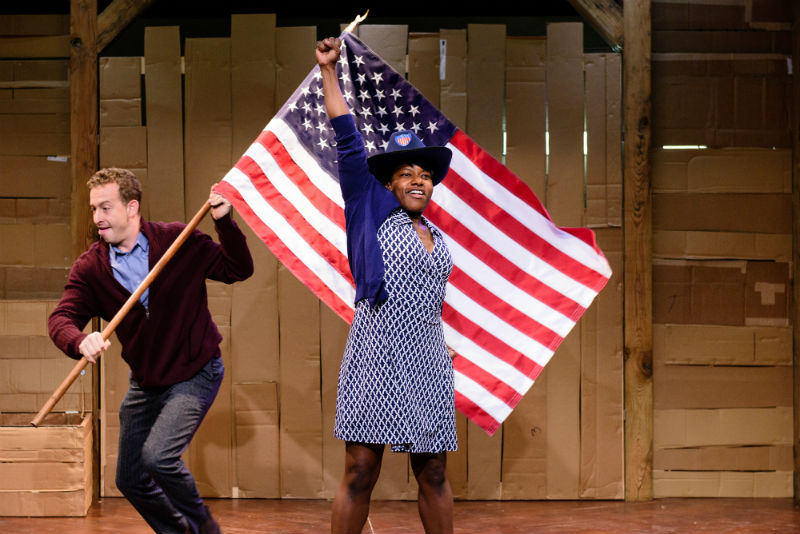 Underground Railroad Game is one of four provacative plays presented in the No Safety Net festival. Photo by Ben Arons.

The three-week-long theater festival No Safety Net presented by the University Musical Society (UMS) will showcase four productions that focus on important and divisive social issues in modern society, from slavery and terrorism to transgender identity, radical wellness, and healing.

So, what do the four pieces in No Safety Net have in common?

“It’s a way to have provocative subject matter, to have important and courageous conversations, and to do it in a safe and nurturing sort of way,” said Matthew VanBesien, the newly appointed president of UMS, in a press release. “To spark debate, and bring our audiences on a journey around some interesting and sometimes troubling areas of social relevance.”

All of the plays featured in the festival address hot-button issues while trying to view those issues through some new sort of perspective.

“This is the kind of theater that some people are really drawn to. If you have a social justice mindset, or are someone who’s really interested in digging into some of the deeper issues of our time, then this is the series for you. But if you’re hesitant about those things, it is also the series for you,” said Jim Leija, UMS's director of education and community engagement, in a release. “This is the place that we want everyone to come together to think about how we’re moving ourselves forward as a community, as a country, and as a global society.”

Along with the four theatrical performances, there will be many community dialogues and workshops incorporated into the festival to help audiences discuss and process the shows. “We’re thinking about how to surround the performances with different kinds of experiences that bring context and dialogue and other kinds of opportunities for action,” said Leija. Most of these activities are free and open to the public.

Notable among these accompanying seminars is Theater Matters: Activism, Imagination, Citizenship, a keynote event with Claudia Rankine and P. Carl that is a part of the Penny Stamps Speaker Series. In it, Rankine and Carl will talk about how theater can successfully promote social justice and how it can help its audience imagine and take steps to bring about a more equitable America.

“The arts provide a powerful opportunity for exploration and dialogue around some of the most challenging issues that our society is confronting,” said Mark S. Schlissel, the president of the University of Michigan, in a release. “I am thrilled that UMS is taking this bold move to present a collection of socially relevant stage work, along with surrounding activities that bring important context and opportunities for reflection and action around those productions.”

Echoing Schlissel’s sentiment, VanBesien said, “We want this work to help spark important dialogue and conversations amongst our audiences and amongst members of the community, we want to do it in a safe and nurturing way, and we really hope that this work helps build greater understanding between people but also a greater resiliency in their own thinking.”

Underground Railroad Game
Jan. 17-21 | Arthur Miller Theatre
Jennifer Kidwell and Scott Sheppard play two middle-school teachers who incorporate an interactive role-playing game into their lesson on the history of the Underground Railroad. Outside the classroom their relationship becomes romantic, offering the audience their own lesson about the cross-sections of race, sex, and power.

Us/Them
Jan. 24-28 | Arthur Miller Theatre
A play by BRONKS, a Belgian theater company, based on the 2004 Beslan hostage crisis when more than 1,200 people -- mostly children and their mothers or grandmothers -- were taken hostage. Us/Them looks at how children cope with extreme situations, contrasting their views with those of the adults.

(I Could Go On Singing) Over the Rainbow
Jan. 26-Feb. 3 | Penny Stamps Gallery
Glasgow-based performance artist FK Alexander identifies as living in recovery from drug addiction and mental collapse. By singing alongside a distorted recording of the last time that Judy Garland sang “Over the Rainbow,” just months before she died, Alexander intends to create a therapeutic space through ritual, repetition, and intimate connection.

They, Themself, and Schmerm
Jan. 31-Feb. 3 | Arthur Miller Theatre
A one-person show written and performed by transgender artist Becca Blackwell who prefers the personal pronoun “they.” Becca recounts their personal experience being adopted by a Midwestern religious family and trained to be a girl. The production details the tragi-comic transitions in life, family, sex, and gender while asking what it actually means to be authentic.