It's a Family Affair: A mother-and-son creative partnership on exhibit at NCRC 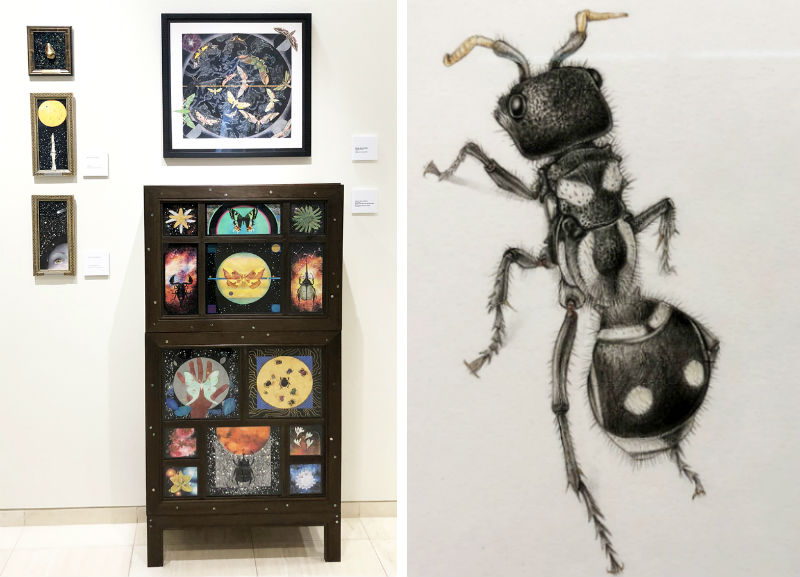 The spirit of the Renaissance's Cabinets of Curiosity is alive and well and on display in the University of Michigan’s NCRC galleries through May, courtesy of a mother-and-son artist duo. Two separate exhibits, Ecological Fiction by Karen Anne Klein and Hidden Ubiquity: Celebrating the Tiny Majority by Barrett Klein, delineate and illustrate nature’s inhabitants and habitats, from the cosmic to the minute.

An accomplished draftsman, book artist, and storyteller, Karen Anne Klein devotes her considerable gifts to describing the natural world in all its variety. Her main subjects are masterfully executed colored pencil drawings of birds and insects, which she incorporates into prototypes for objects that furnish her domestic environment. She has created designs for game boards, wallpaper, dishes, furniture, and imaginary currency, all embellished with butterflies and moths, herons, and ducks and hundreds of other closely observed creatures meticulously rendered in vibrant color.

Klein says she particularly enjoyed installing the objects from Ecological Fiction in NCRC’s Rotunda Gallery because it gave her an opportunity to see the entirety of her prolific output together in one unobstructed space. “This is such a great experience,” she explains. “All of the series of the birds and insects can actually be seen [together, here]. In my house, there’s a floor that you [have to] go up, and they’re behind things.” (She works in her home and treats it as a constantly growing installation, so much so that recently the Detroit Institute of Art sent a photographer to document the objects and drawings on site.) 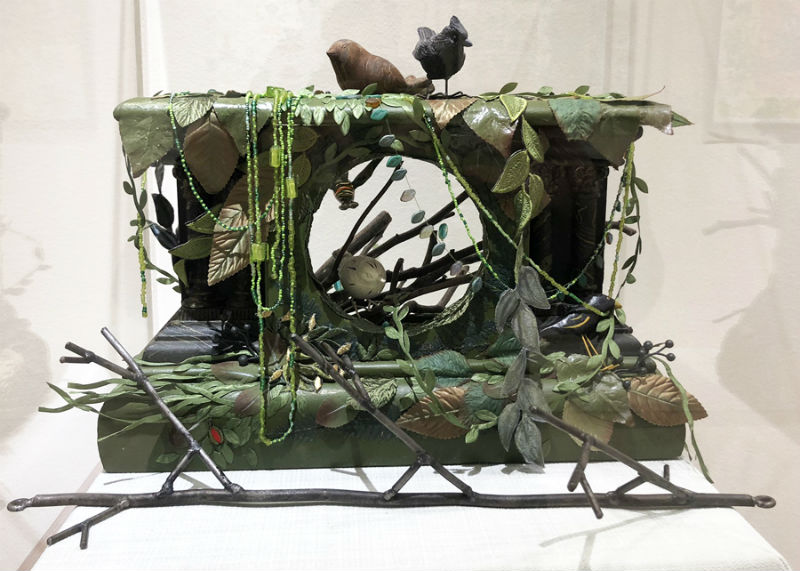 Klein is a storyteller at heart, and many of the works on display show her longstanding familiarity with myths and legends, both well-known and obscure. Her series of small colored pencil drawings, Hand Stories, illustrates a variety of tales, from the lives of saints to Greek myths. She also frequently works cooperatively with writers to create handmade books. In particular, Klein has often collaborated with the eminent Detroit writer and Kresge Eminent Artist Award winner Bill Harris. “Bill Harris writes mostly about important things,” she says, “But every once in a while I present him with a project that I consider comic relief. … There’s a whole series called Tiny Beasts, a bestiary. [My son] Barrett acted as our collaborator so we didn’t get too far from the truth and I gave Bill a selection of insects to write about and he wrote remarkable poems!”

It’s clear that Klein has logged many hours in natural history museums, drawing from specimens, making visual lists and catalogs of all natures’ creatures. Many of her drawings have been loosely organized by subject and assembled into finely crafted cabinets that invite the visitor to open them and look inside for further discovery. Klein credits her artistic interest in documenting nature in part to her children’s involvement in science. “I don’t know that I would have gone toward the direction that I have gone without their having been involved with museums because they really did take me behind the scenes,” she explains. 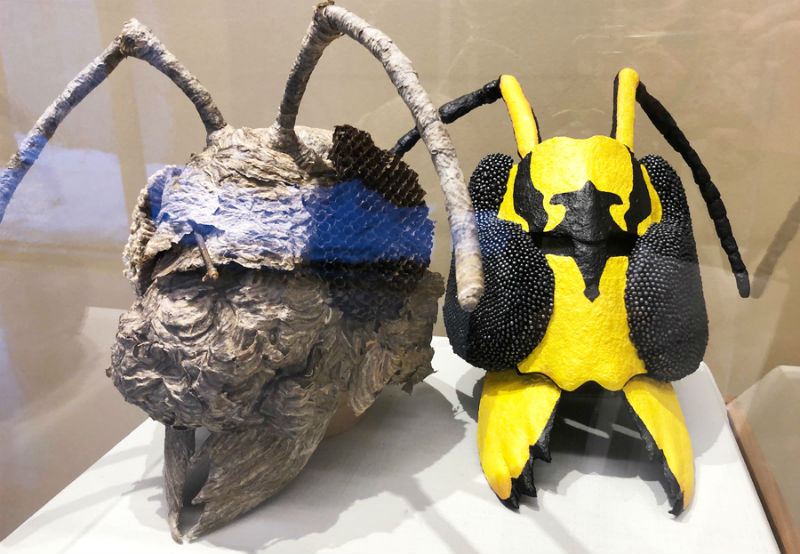 Where Karen Anne Klein opens her lens on the natural world to a wide angle, her son Barrett Klein, an entomologist (or as he describes himself, "entomoartist"), goes deep. His work, on display in the Connections Gallery, is closely related to his many entomological projects and to his career as a professor of biology at the University of Wisconsin, specializing in animal behavior, entomology, and social insect biology. His tromp l’oeil replicas of katydids and dung beetles from the American Museum of Natural History and the Bronx Zoo occupy a display case alongside a very life-like, diminutive faux frog designed for use in behavioral experiments. Like his mother, Barrett Klein is an accomplished draftsman. His polished pencil drawings of insects delicately convey the alien beauty of these tiniest of earth’s inhabitants.

The most eccentric objects in Hidden Ubiquity are the large, human-sized costumes and headpieces of insects, which he uses in educational role-playing in his classes on insect life. He describes the elaborate constructions as the result of lifelong family interest in costumes at Halloween, now refined into a tool for teaching his students how to behave and embody insect behavior. “The idea of peeking at a 3-mm long insect rushing through the leaf litter is one way for some individuals to appreciate the minutiae, but to wear it or view it writ large … can be another way to appreciate or experience or celebrate what I refer to as the tiny majority.” He adds, “I find my teaching, research, and art to be inextricably linked.”

Tracing the contrasts and correspondences between the bodies of work of these two curious and clever artists is both fascinating and instructive. It illustrates how creative cross-pollination can occur within a family of gifted individuals. The two acknowledge that they have influenced each other in ways that are complex and lifelong. Karen says of her children, “They were [always] really interested in what I was doing, but I was really interested in what they were doing too.” Barrett Klein adds, “It’s not a one-way exchange, that should be pretty obvious!”

"Ecological Fiction" by Karen Anne Klein and "Hidden Ubiquity: Celebrating the Tiny Majority" by Barrett Klein will be on view until May 3, 2019 in the Rotunda and Connections Galleries, in Building 18 of University of Michigan’s North Campus Research Center. For more information go to ncrc.umich.edu.