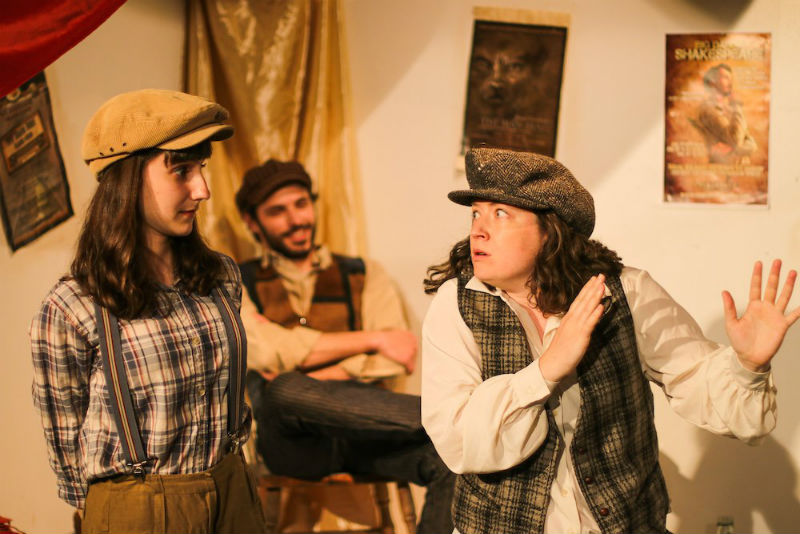 Roustabout Theatre's Big Daddy Shakespeare looks at The Bard in a more personal and humanizing lens than is generally studied in school. A one-act play adapted from several of Shakespeare’s works by Anna Simmons and directed by Josie Lapczynski, shows him as a son, husband, and father who he left his young family to be a playwright in London. What was he thinking? Feeling? And how could his plays reflect his state of mind through separations -- and grief?

The Ypsi Experimental Space (YES) is decorated throughout with a specific theme. A popcorn machine greets you at the door, the warm scent of the freshly popped treat filling the air. Posters from past Roustabout Theatre shows are plastered on the walls like old circus playbills. The stage is draped in the unmistakable striped fabric of a circus tent.

The vehicles for our exploration of Shakespeare are, fittingly, four roustabouts, or circus workers who erect and dismantle tents, care for the grounds, and handle animals and equipment. Our four roustabouts (Amanda Buchalter, Julia Garlotte, Russ Schwartz, and Cynthia Szczesny) enter the stage to put up another poster (for the show we are about to see) and set up some stage equipment and costumes the circus might need, but are, of course, used for their own show.

The roustabouts seamlessly weaving back and forth between talking about Shakespeare, reenacting several scenes from his plays, and drawing from his poetry. We learn of his perhaps troubled relationship with his father and wonder why he left his family alone for so long.

Were so many of Shakespeare’s female characters strong-minded because his own mother was so, or because he was the father of two daughters?

Shakespeare did write an awful lot about fathers and daughters after all. There is also Shakespeare's son, Hamnet, whose name bears an obvious similarity to his play Hamlet and died young.

While occasionally pensive, Big Daddy Shakespeare is far from a sedate play. The four actors are masters of language and expression, and they absolutely bring the physical comedy, keeping the audience laughing throughout. Schwartz, in particular, has some wonderful facial expressions, most notably as the indignant father Egeus from A Midsummer Night's Dream. Buchalter perfectly captures the inordinate lovesickness of so many of Shakespeare's young heroines. I would watch Garlotte in Hamlet any day, and Szczesny nails Lady Capulet and King Lear. (Keep an eye on everyone’s faces during the King Lear scene, and just try not to snicker.)

This is not Roustabout’s first tackling of The Bard. In 2017, the company presented Shakespeare, You Sexy Beast, a montage show that used his sonnets as the scene transitions. Having the actors as commenters rather than just presenting Shakespeare's words adds interest and helps to shape the way the audience views the plays and the real man himself -- a rebellious son, absent husband, and father to three children.