Bring the Noise: Benjamin Miller's Porcelain Hammer and Mark Morgan explore the far side of music 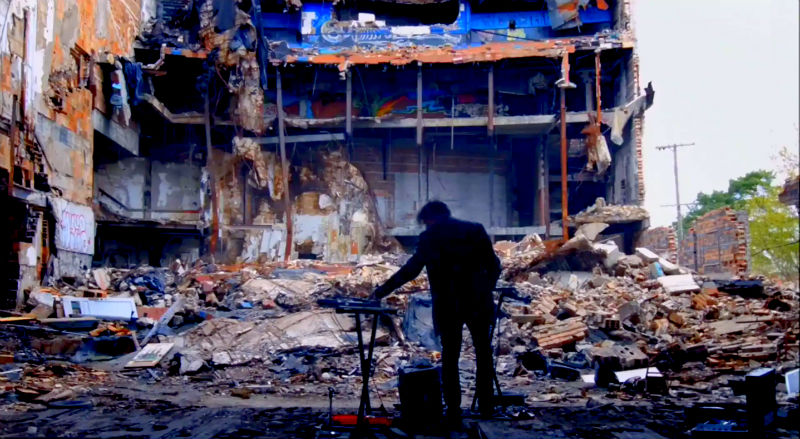 It was nearly 10 am on Tuesday, Oct. 2, 2019, when I turned on WCBN in my car. The University of Michigan student radio station is a staple in my listening routine, but even my catholic ears were surprised to hear noise icon Merzbow power-sawing his way through two tracks followed by fellow Japanese screechers Otomo Yoshihide and Keiji Haino just after breakfast time.

It was free-form radio at its free-formiest, but it was also a reminder that these Japanese artists -- among others on the outer fringes of music -- helped spawn a Southeast Michigan noise-music scene in the 1990s that, despite the difficult listening, spread through the DIY underground and helped hatch micro-scenes in various basements across the U.S.

The Michigan scene birthed in the 1990s grew up in the early 2000s -- think Wolf Eyes, Universal Indians, Princess Dragonmom -- and began to morph as artists left the state, changed the focus of their music, or left playing in bands entirely. Still, the scene continued to plug away and mutate with new groups emerging such as the more rocking Child Bite and Heavier Than Air Flying Machines, the dark and ambient Evenings, tape-based acts Sick Llama and Creode, coarse electronics from Lidless Eye, and electro-acoustic weirdness from The New Me, Glass Path, and more. There was also the recent Trip Metal festivals, founded by Wolf Eyes' John Olson, which brought together noise freaks, free jazzers, and assorted other sonic cosmonauts in Detroit for three days of plundering earholes.

And I can't forget Ann Arbor's mysterious Satan Face, an unnamed member of which appears to be responsible for playing Merzbow & Co. on the radio during otherwise pleasant mid-mornings. The Satan Face show Nothing but the '90s! is on WCBN every Tuesday from 9-11 am playing the harshest of the harsh, and that show's playlist could easily include Ben Miller's Porcelain Hammer and Mark Morgan, former guitarist for acclaimed art-rock act Sightings. Miller and Morgan lived away from Michigan for many years, but they've both returned to the Detroit area and are teaming up for a hair-parting concert on Saturday, Dec. 14, at Lo-Fi Bar in Ann Arbor.

Guitarist Miller, an Ann Arbor native, has a long history in experimental music dating back to his time in Sproton Layer (1969-1971) with his twin brother Larry and older brother Roger, who went on to be the co-founding guitarist of post-punk legends Mission of Burma. But Ben is probably best known for his stints in the recently reformed Empool (1976-78, 2018-) with Larry, Destroy All Monsters (1977-78) with Stooges guitarist Ron Asheton and MC5 bassist Michael Davis, and Glenn Branca’s 100-Guitar Orchestra, as well as M3 (roughly 1993-2011) with both Roger and Lawrence. Additionally, he leads the Sensorium Chamber Orchestra of Detroit, which explores interval-based composition, and he performs solo using a baritone guitar or a customized Gibson Kalamazoo, which he treats with various objects (screws, silverware) and runs it through myriad effects to create discordant soundscapes. (Contorting instruments runs in the family: Roger is a prepared-piano devotee.)

That's a good description of Sightings, too, an experimental trio that Morgan played in for around 15 years that released 11 albums of wobbly, fuzz-shrouded missives that flirted with the edges of song-based craft without ever giving into it. But Morgan's solo guitar performances are almost entirely abstract, with his heavily modified instrument fed through a bevy of effects pedals to create threatening alien soundtracks.

Morgan's aggressive solo sounds are the same sort of thing you might have heard in a tiny Michigan basement sometime in the 1990s as a dozen people mingled around the performance table and drank cheap beer as they alternately soaked in or ignored the cacophony blasted at their faces.

It's also something you might hear on WCBN some random Tuesday morning.