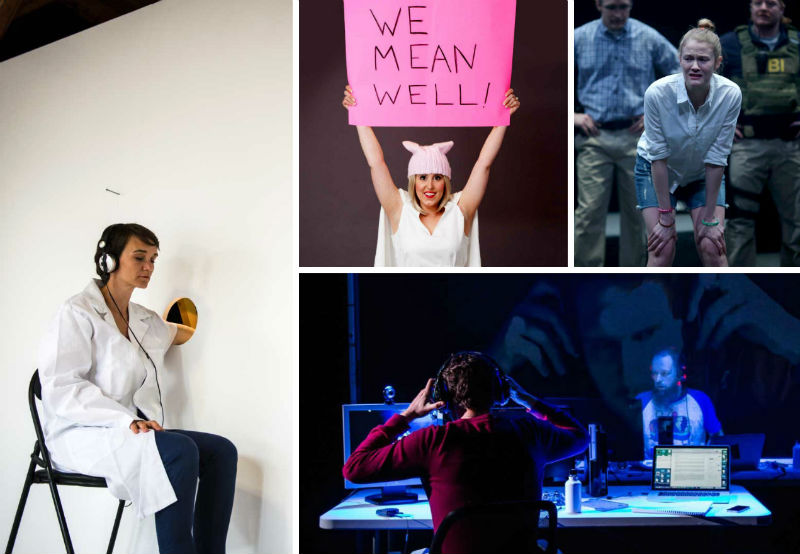 The Believers Are but Brothers (Jan. 22-26, Arthur Miller Theatre)
"An electronic maze of fantasists, meme culture, 4chan, the alt-right, and ISIS. We live in a time where old orders are collapsing: from the post-colonial nation states of the Middle East to the EU and the American election. Amid all of this, a generation of young men find themselves burning with resentment, without the money, power, and sex they think they deserve. Written and performed by Javaad Alipoor and co-directed by Kirsty Housley (who also co-directed Complicite’s The Encounter), this multimedia show weaves together stories of three disaffected men and their journeys to radicalization, exploring the smoke and mirrors world of online extremism, anonymity, and hate speech."
Program Booklet (PDF)

Blog & Free Workshop: "Wonder and Woe: The Challenges of Internet" by U-M School of Information professor Cliff Lampe, exploring bad internet behaviors. He will hold a free workshop, "How to Become an Internet Troll" (Sat., Jan. 25, 4 pm, Pierpont Commons) in accompaniment to UMS’s presentation of The Believers Are But Brothers.

As Far As My Fingertips Take Me (Jan. 24-Feb. 9, various venues)
"The Dublin Regulation, which mandated a fingerprinting database across Europe for all refugees and migrants, means that refugees may be sent back to where their fingertips were first recorded, without any regard to the refugee’s needs, desires, or plans. Artist Tania El Khoury commissioned musician and street artist Basel Zaraa, born a Palestinian refugee in Syria, to create a narrative inspired by the journey his sisters made from Damascus to Sweden, to help others understand the effect of border discrimination on peoples’ lives. As Far As My Fingertips Take Me is a one-on-one encounter through a gallery wall between the audience member and a refugee, their arms touching without seeing each other. While the audience member listens to his story through headphones, the refugee draws on the audience member’s arm."
Program Booklet (PDF)

Is This a Room: Reality Winner Verbatim Transcription (January 29-February 2, Arthur Miller Theatre)
"June 3, 2017. A 25-year-old former Air Force linguist named Reality Winner is surprised at her home by the FBI, interrogated, and then charged with leaking top-secret evidence of Russian interference in our voting system to the media. She’s in jail now, sentenced in August 2018 to a five-year, three-month prison sentence. Conceived as a play and directed by Tina Satter, the 2017 verbatim transcript reveals a verbal dance between the knife-sharp Reality and the FBI agents who arrive at her home unannounced to interrogate her. As Reality’s autonomy shrinks before her eyes, a simmering real-life thriller emerges, offering vital considerations of access, language, power, patriotism, and honor at this particularly loaded American moment."
Program Booklet (PDF)

White Feminist (February 3-9, Duderstadt Center Video Studio)
"Gender and privilege collide in this scathing comedy that will grab you by the pussy hat. As the host of a morning talk show, “Becky’s Time,” Lee Minora skewers and dissects the failings of non-intersectional feminism and the dangers of white women’s tears, putting the #MeToo movement, liberal guilt, and fake celebrity apologies into a blender and creating a concoction that is as absurdly hilarious as it is painfully true. With the cunning of a fool and the charm of a talk-show host, she unearths inadequacy and ineffectiveness in the face of huge social inequality. Teetering between oppressed and oppressor, Minora takes everyone to task, including herself, with a smile on her face and her middle fingers in the air."
Program Booklet (PDF)