Cover Your Heads: Angélique Kidjo and others interpret Talking Heads 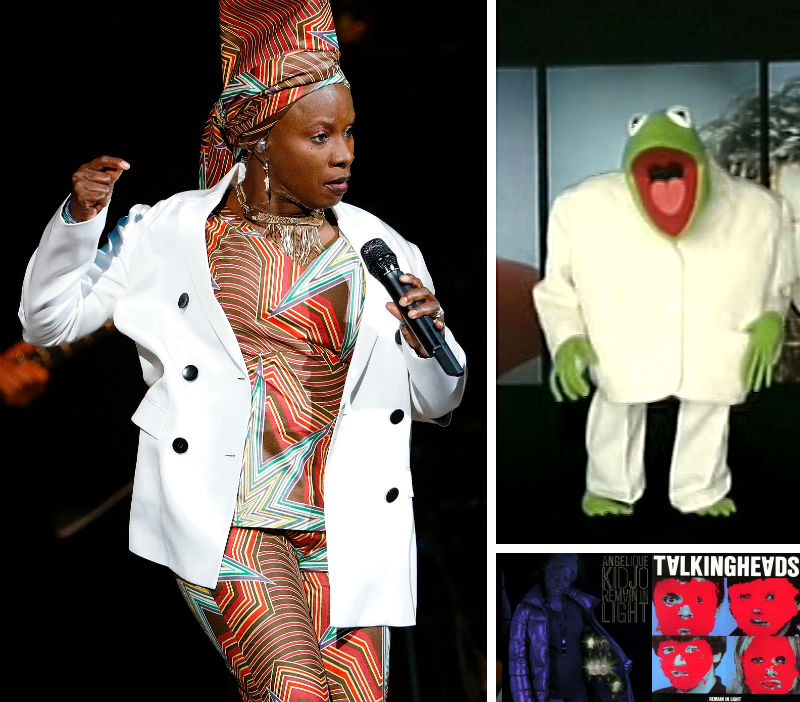 When Angélique Kidjo first heard Talking Heads' 1980 LP, Remain in Light, she instantly recognized the music's deep debt to Africa. That was in 1983, the year the singer had moved from her native Benin to Paris to study music. It was there that Kidjo began to absorb the city's confluence of Afropop, jazz, Latin, and rock, which she has turned it into a 40-year international career touching on all those styles.

That memory of hearing an American band apply African rhythms to art-rock stuck with Kidjo to such a profound degree that in 2018 she released a song-for-song cover of Remain in Light, which has received raves.

Kidjo turned to another inspiration -- Cuban singer Celia Cruz -- for her 2019 album, Celia, which won a 2020 Grammy. But when Kidjo performs at the Michigan Theater on Sunday, February 16, as part of UMS's current season, she'll highlight the Remain in Light project.

While Kidjo was the first artist to reinterpret all of Remain in Light in the studio, Phish's 1996 Halloween concert featured the jam band playing the album live in its entirety. Covering entire records like that is rare, but interpreting Heads tunes has been happening almost since the band debuted. One of the first was by German pop singer and actress Debbie Neon, whose version of "Psycho Killer" came out in 1979, two years after it appeared on Talking Heads: 77, the band's debut.

The next year, Massachusetts' The Fools released a parody version, "Psycho Chicken," and Heads covers have been nonstop since.

Popular groups such as The Lumineers ("This Must Be the Place (Naive Melody)"), Smashing Pumpkins ("Once in a Lifetime"), Florence and The Machine ("Wild Wild Life"), Umphrey's McGee ("Girlfriend Is Better"), Widespread Panic ("Life During Wartime"), Car Seat Headrest ("Crosseyed and Painless"), Yonder Mountain String Band ("Girlfriend Is Better"), and Phish again ("Cities") have had no fear of Talking Heads music.

The long-running Ann Arbor/Metro Detroit band Frontier Ruckus even recorded a special version of "This Must Be the Place (Naive Melody)" for a fan's wedding.

That song and "Once in a Lifetime" are among the most popular covers, but the clear number one is "Psycho Killer," which has been played by Velvet Revolver, Jason Isbell, Barenaked Ladies, Cage the Elephant, Local H, and more.

The "and more" is what we'll concentrate on below: the five quirkiest Talking Heads covers that I found on YouTube, starting with The Fools' fowl take. Plus, check out Kidjo's videos from her Remain in Light record as well as a special bonus Heads cover by a Chicago vocal legend who is also playing the Michigan Theater on February 15.

Young@Heart Chorus, "Road to Nowhere" (2016)
This fellow Massachusettes "band" doesn't go totally wacky like The Fools, but the members of this elderly housing project choir are filled with good humor in this version from the documentary film Young@Heart.

MGMT, "This Must Be the Place (Naive Melody)" (2002)
A pre-fame MGMT perform a borderline karaoke version during its first concert while they were still students at Wesleyan University.

Kermit the Frog, "Once in a Lifetime" (1996)
You may ask yourself why a felt amphibian is covering this song while wearing a David Byrne suit? To set up the Statler and Waldorf punchline at the end, obvs.

Adrienne Knauer, "This Must Be the Place (Naive Melody)" (2019)
The harp is lovely but it was a surprise when she pulled out a flute and emulated the song's keyboard melody. Home is where she wants to be, playing Talking Heads songs, making it up as she goes along.

Mavis Staples, "Slippery People" (2019)
A full-throated live version from the Chicago gospel-blues legend's new concert film, Live in London. Shout for it when Staples plays The Michigan Theater on February 15 as a benefit for Breakfast at St. Andrew’s.

Angélique Kidjo, "Once in a Lifetime" (2018)
This was the first song Kidjo ever heard from Remain in Light.

Angélique Kidjo, "The Great Curve" (2018)
This promo clip is made up of videos of fans dancing to the song, including Alicia Keys and Questlove.

Angélique Kidjo performs at the Michigan Theater on Sunday, Feb. 13, at 7 pm. Visit ums.org for tickets and more info.