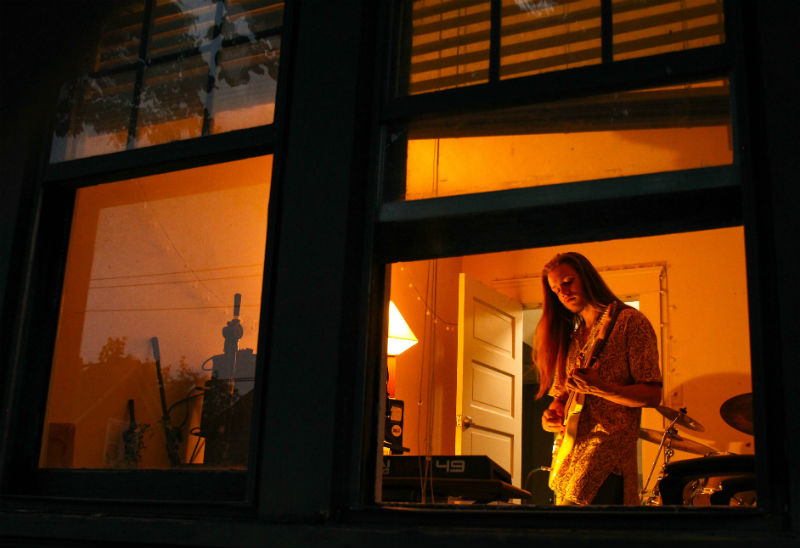 Everett initially welcomed visitors with the release of his 2018 Lotus Hotel “grand-opening” single, “Deluded Paradise,” a laid-back, philosophical ode to understanding and learning from different viewpoints in the world. Bright guitars, fervent bass, and delicate cymbals merge beautifully with Everett’s calming vocals as he sings, “You’ll know that it’s real when something you feel tugs your wheel the right way / And wills your heart to change.”

“Thematically, the inspiration is the idea of being so convinced by your version of reality and seeing the world from your conditioned perspective that you can’t imagine another perspective,” said Everett, who plays drums, guitar, and bass on the track. “I definitely struggled with that for a while, and still do obviously, like we all have our blind spots, and I’m in this place now where it’s amusing to me when I find those blind spots.”

The track’s lyrics reflect Everett’s deep appreciation of Greek mythology and recognition of Icarus’ tragic flaw: “But hunger fills me / And as I fly under churning skies this / This hunger’s building / I cut my ties and I fantasize just to come up empty / Guess the craving’s all I’ve found.”

“There’s that side of me being lethargic and loose and not grounded," Everett said, "and then there’s this part of me that wants to fly over everything, and skip all of this, and get to the point in my life where I’m achieving everything and hitting the fast-forward button. I also know that I am not the kind of person that would be able to transport those environments from here to there and super quickly adapt."

“Talking in Circles” also showcases Everett’s growth as an emerging songwriter and multi-instrumentalist. When it comes to production and mixing, he prefers to transform clean-sounding recordings into grimy, edgy imperfections that linger in others’ minds long after the first listen.

“It’s working with those imperfections, building from them, and finding out how they can complement your style rather than fighting them the whole time. That song was really a good learning process, and I got a soft spot in my heart for it,” Everett said.

Everett developed a soft spot for music while growing up in Ann Arbor. His father taught music theory at the University of Michigan and his mother worked as a private violin teacher. Those initial musical influences led Everett to learn piano and drums as he listened to The Beatles, A Tribe Called Quest, Gorillaz, Unknown Mortal Orchestra, Tame Impala, and David Bowie.

“With my musical journey, I look at artists that I love, and I see myself in them. Listening to different artists and understanding their perspectives has helped me understand my own perspective and discover more about how I view the world and the people around me,” said Everett, who took his artist name from the Lotus Hotel and Casino referenced in Rick Riordan’s Percy Jackson & The Olympians: The Lightning Thief.

Everett’s latest is a ‘90s hip-hop-inspired single, “Holdin’ Out,” released on the OSSI: Volume 4 music compilation. The groovy track features deep basslines mixed with beatbox rhythms and bright guitars while Everett’s atmospheric vocals are punctuated with raps by OSSI collaborators Matthew Boutte, aka MEBO, and Matt Greaves, aka Matte Black.

“I remember lying in bed with my bass guitar, and I stumbled upon what would become the bassline for the tune. I remember it felt reminiscent of something I might hear in one of A Tribe Called Quest’s jazzier tracks, and the idea of creating something in that vein really excited me,” Everett said.

“This was an important step for me because one of the things that made me fall in love with A Tribe Called Quest was the sense of brotherhood, mutual encouragement, and friendship that is inseparable from their sound. I aspired to create something that could communicate a similar sentiment and also serve as a personal reminder of the depth of friendship that Matt, MEBO, and I have.”