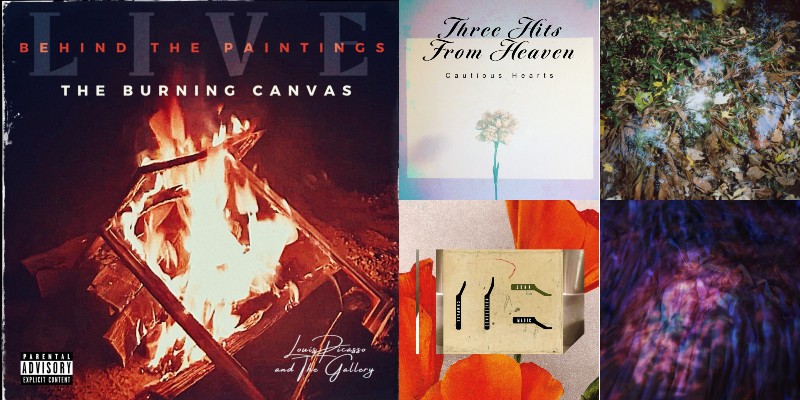 Louis Picasso & The Gallery, Behind the Paintings: The Burning Canvas
Ypsi's Louis Picasso alternates between making hip-hop featuring beats made in the computer and creating songs with a full band. He's really good at both approaches, but I really love him with a band, whether it be with Hiiigher Minds or, as on his new live mini-album, The Gallery. Current has a nice interview with Picasso about the album and the Hiiigher Minds multimedia collective.

Sean Curtis Patrick, I See Myself in Some Deep Future
Ann Arbor's Sean Patrick Curtis is known for his ambient albums made with keyboards and modular synths, but he's also a talented guitarist as this new album atests—as do several others in his large discograpy.

Cautious Hearts, Three Hits From Heaven
We recently featured Lily Milo's solo mini-album Stars Go Out, but Cautious Hearts is her indie-rock-ish duo with musician and visual artist Dylan Strzynski, who we also highlighted recently for his Staycation album under the Diesel Marine handle. The three songs on Cautious Hearts' debut release is the sweet distillation between Milo's folky songs and breathy voice and Strzynski's twangy guitar.

Junk Magic, Compass Confusion
It's been a minute since pianist Craig Taborn has lived in Ann Arbor (U-M, class of 1995), but when a musician this talented once called this town his home, you keep claiming him as your own—even if he grew up in Minnesota and has lived in New York City for 20-plus years. Taborn's Junk Magic project, which mixes electronics, complex composition, and improvisation, debuted with a self-titled album in 2004, and Compass Confusion is the long-awaited follow-up.