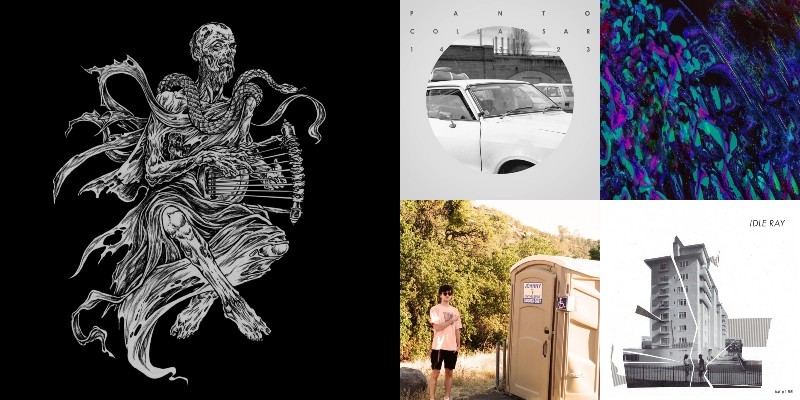 Dr. Pete Larson and his Cytotoxic Nyatiti Band, Damballah
I mentioned this album in the March 26 Friday Five when the first single and pre-order went live, but now that the LP/CD/digital are all out running wild in the world, it's time you capture this epic collection of Kenyan-folk-infused psych-rock jams for yourself. From the Ann Arbor/Ypsi/Michigan group's Bandcamp page for this album: "Damballah is the spirit of fertility, goodness and knowledge symbolized by the two snakes. She brings and communicates knowledge. Damballah is a great spirit of fertility and wisdom that helps all people avoid bad steps and points them toward the correct paths." Dr. Pete Larson (nyatiti, vocals), Fred Thomas (guitar), Mike List (percussion), and Dave Sharp (guitar, bass, synth) are the people who avoided the bad steps and Ypsilanti's Jim Roll pointed them on the correct path over at the Willis Sound studio.

Idle Ray, Idle Ray
Several of the songs on Idle Ray's album-length debut have trickled out over the past year such as "Water Comes in Through the Windows," "Dreamed You Were a Dog," and "Last Show," and they're combined here with nine more heartbreaking works of staggering Fred Thomas-ness. Washtenaw County's bard of indie-rock greatness.

Doogatron, "SoundFreqNRG (Feat. Dia Tee)"
Vocalist Dia Tee featured on Doogatron's "Cosmic Dance" back in February, and she's back helping out on the Ypsi outfit's latest slab of jittering electronica.