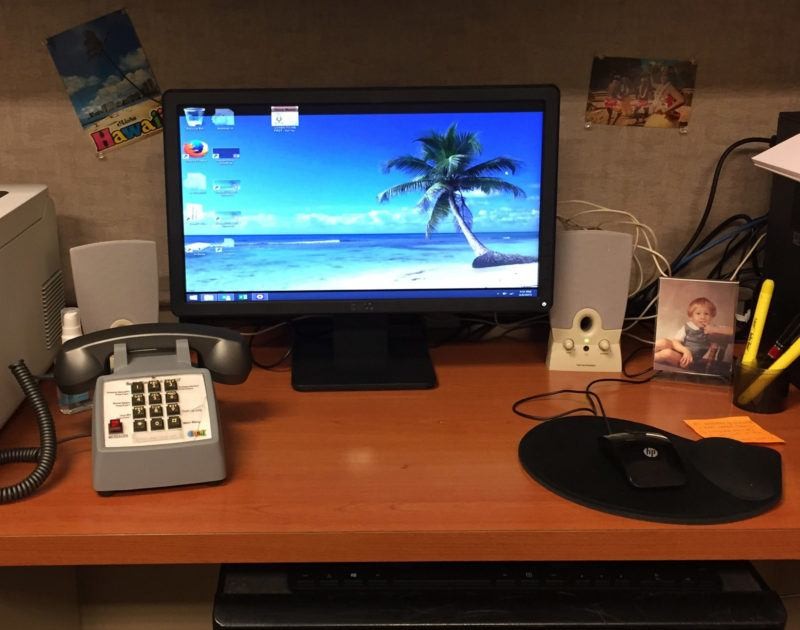 Throughout the show’s run, which takes 45 minutes to an hour, a plot with several threads unfolds. You never meet the characters in person, but glimpse their inner lives through details like email signatures and index cards. Although the show contains corporate satire, it goes beyond that genre. Temping cleverly recognizes that the messiest human foibles and longings for meaning are well set off against an industry that turns a profit on estimating how long people will live.

Temping is an experience that rewards engagement: completing tasks in a timely fashion, snooping through computer files and desk drawers, eavesdropping on conversations not meant for you, and deciding where to put your loyalties as the full implications of your new job unfold. You are being monitored for quality assurance purposes and the experience responds to the actions you take and the information you uncover.

My performance in Temping happened to take place on the first day that I went to work in person at my real job since the beginning of the pandemic. Perhaps I was prepared for the experience by pulling out my lunch box that morning and finding a dirty fork that had been there since March 11th, 2020. Temping feels eerily like a real desk job and not only because of its intricately designed set. It creates space for the feelings of sadness, fear, and poignancy that punctuate office work before being interrupted by the next email.

Written by Michael Yates Crowley and directed by Michael Rau under the auspices of Wolf 359, Temping has appeared since 2014 in locations across the US. Wolf 359, a self-described “company of narrative technologists” has created a show that anticipated not only the safety requirements of pandemic-era performance, but the emotional toll of having human interaction almost completely replaced by technology.

Having experienced Temping once, I would do it again, not only to uncover more of the hidden details of the story and set but to refine and deepen my own performance.

Emily Howard is a library technician at the Ann Arbor District Library.

I just signed up, and am…

I just signed up, and am quite psyched. Thanks for the word!

Thanks for explaining this…

Thanks for explaining this. I saw it on schedules but had no idea what it was all about. I signed up.