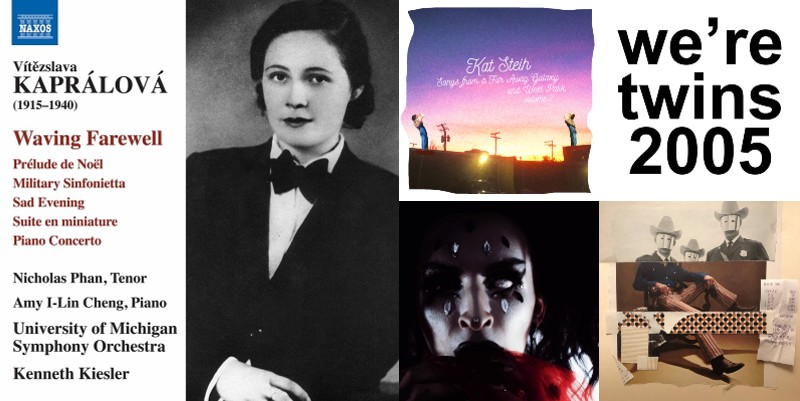 This week features the classical from the University of Michigan Symphony Orchestra, an exploration of the We're Twins label, twangy lo-fi from Charley Cardboard, power-pop from Kat Steih, and industrial techno mixes by Aunti.

University of Michigan Symphony Orchestra, Waving Farewell — Kapralova: Orchestral Works
Vítězslava Kaprálová was a Czech composer and conductor who died in 1940 at the age of 25, but she managed to compose everything from solo piano works to orchestral suites during her brief life. In 2015, the Kaprálová Festival was held at the University of Michigan, which is where part of this University of Michigan Symphony Orchestra album was documented for the Naxos label. Recorded over three sessions at Hill Audoritorium, under conductor Professor Kenneth Kiesler and featuring tenor Nicholas Phan and SMTD Professor Amy I-Lin Cheng (piano), the album gives listeners an overview of Kaprálová's versatility. There's also a nice track-by-track explanation of the album on the UMSMTD website: "Prof. Timothy Cheek gives us an in-depth look at UMSO’s new CD."

We're Twins label
We're Twins was a turn-of-the-millennium Ann Arbor-based DIY label focusing primarily on lo-fi, homespun music. It was hatched at WCBN and cranked out a ton of releases during its six years in existence. Several artists who had tracks on the label, such as Fred Thomas, Jib Kidder, Kelly Caldwell, and Dustin Krcatovich, are still producing music today, but there are dozens of names who are unfamiliar to me. The label has slowly been releasing its catalog on Bandcamp, but perhaps the best place to start is this well-done article on the Anomaly Index blog about We're Twins' history: "Label Archaeology: We’re Twins Records (Ann Arbor, 2000-2006)."

Charley Cardboard, Long Flavor
Charley Cardboard is Ypsilanti's Craig Johnson, who is also a visual artist, and this is his second release this year under the heavy-duty-paper alias. Long Flavor is the companion piece to March's Leaf Code, and both records explore twangy guitar and drum machine instrumentals through a lo-fi lens.

Kat Steih, Songs from a Far Away Galaxy ... and West Park Vol. 2
September saw the release of Vol. 1 of Ann Arbor singer-songwriter Kat Steih's new EP series, and Vol. 2 continues in the same vein of tightly produced new-wave-leaning power-pop, which is a departure from her also excellent 2019 album, the folk-leaning Hymns of the Huron.

Aunti, Exposure Mix 035, Dunegeon Mix, Drip Mix
Ann Arbor's Aunti came to my attention via the latest entry in the Michigan Electronic Music Collective (MEMCO) Exposure Mix series, but the DJ has a bunch of great industrial-tinged techno mixes on their own Soundcloud, too.