Stamps Gallery's "Envi­sion: The Michi­gan Artist Ini­tia­tive" celebrates creators who are inspiring the next generation 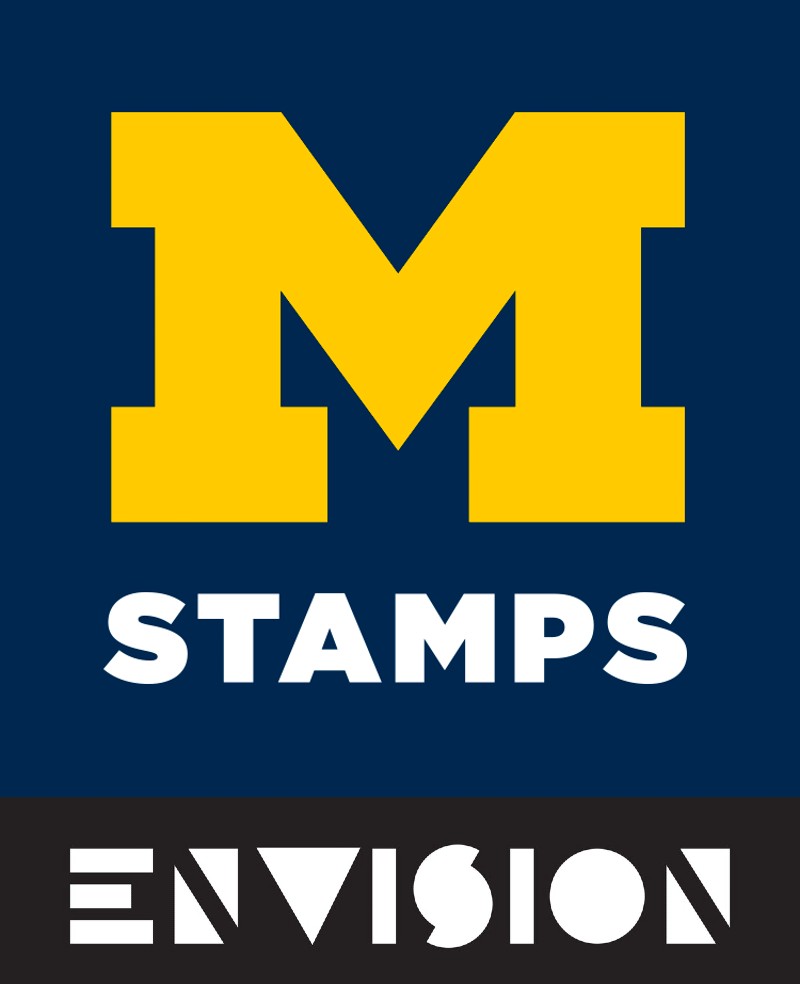 Based on my direction of approach to the University of Michigan's Stamps Gallery, I didn’t see Michael Dixon’s large-scale sculptural alligator head with one sharp, gold tooth before entering—though it's visible in the gallery’s large front windows.

Inside the sculpture’s large open jaw, children’s toys rest as if inside a toy box. Among them, a selection of brightly colored balls, dolls, and books we might recognize from a modern store, but also amidst the display are racist toys such as a mammy doll, which remind viewers that these harmful toys are still collected and sold, holding a space in contemporary American culture that often escapes criticism.

This idea is further enforced by the inclusion of problematic Dr. Suess books, which became a topic of national conversation this past March.

Dixon is among five artists represented in Envi­sion: The Michi­gan Artist Ini­tia­tive, a new program focused on promoting the careers of Michigan-based artists.

Envision has been long in the making. It began development in March 2020, when the Stamps gallery’s initial call for artists went out. In July 2020, the show’s jury (Carla Acevedo-Yates, Ken Aptekar, and Lor­ing Ran­dolph) virtually reviewed 259 submissions from Michigan artists. From this initial pool, five candidates working in “diverse mediums such as paintings, sculpture, fabric and textiles, photography, and new media” were selected. The five finalists—Dixon, Dar­ryl DeAngelo Ter­rell, Nayda Col­lazo-Llorens, Car­ole Har­ris, and Kylie Lock­wood—produced a group exhibition, which opened over a year later, on November 12, 2021. During the interim, the artists were provided with “curatorial and logistical support” in creating a new work for the exhibition.

Michael Dixon was born in San Diego, California. He was educated both at the University of Colorado at Boulder and Arizona State University. He is now a full professor of art at Albion College. Stamps Gallery notes that his work “explores the per­sonal, soci­etal, and aes­thetic strug­gles of belong­ing to both ‘white’ and ‘black’ racial and cul­tural iden­ti­ties, yet simul­ta­ne­ously belong­ing fully to nei­ther.”

In the gallery, Dixon accompanies his sculptural piece with a series of oil paintings exploring family identity. In each painting, and several other works throughout the space, the alligator makes an appearance. This symbol is a reference, like the dolls in the sculptural alligator’s mouth, to racist imagery. The title of the project, Picaninny 1976, refers both to the artist’s broader cultural and familial experiences as a bi-racial child to a white mother. In his gallery wall text he recalls:

My maternal grandparents are from Hattiesburg, Mississippi, and when my grandfather first met me said, "Where is that little Picanniny?" A picaninny is a racial slur used in a derogatory way to caricature little black children. One famous depiction has a child playing while an alligator is waiting. There is an accompanying text that reads, "Gator Bait." This demeaning imagery was intended to be humorous for a white audience. The implications were violence to the black body.

Dixon employs the alligator in numerous ways throughout the exhibit, alternating between realistic depiction, such as video footage of alligators in the wild, to an ominously cheerful Christmas ornament on the tree behind the family. In another painting, an alligator reminiscent of those in Disney’s animated film The Rescuers appears above a young Michael’s head, threatening violence even through all its cartoon absurdity. Again and again, a young Michael stands within the vicinity of a toy alligator, in one instance clutching a Mickey Mouse doll to his chest. Through these inclusions, Dixon challenges the racist history of depiction from multiple angles: the toys and books he grew up with, the cartoons and movies he (and many of us) watched, and the people who created it all. The impact continues to follow us, much like the ominous alligators appearing throughout the gallery.

Dar­ryl DeAngelo Ter­rell is a lens-based artist currently working in Detroit. He received his MFA at the School of the Art Institute of Chicago. In 2019, he participated in the Kresge Arts in Detroit Fellow of Visual Arts program, and has since participated in two fellowships in addition to the Stamps Envision program. In his work, Terrell explores themes of “the dis­place­ment of black and brown peo­ple, femme iden­tity, and strength, the black fam­ily struc­ture, sex­u­al­ity, gen­der, safe spaces, and per­sonal sto­ries through pho­tog­ra­phy and dig­i­tal art.” In the project for the gallery, I Owe You Nothing, This Is for Me, Terrell’s artist statement elaborates on these concepts, explaining how his alter ego is used not only to break down binaries and societal norms, but to celebrate, desire, and embrace his existence for all that it is:

Being a big bitch, in a world of small hoes, I exude an energy and identity that don’t completely fit into the binary, I exist in a void. By way of an alter ego named Dion, I explore what it means to be desired, more than to just fit in, but to feel fucking included, to exist in a place where my body in all of its Blackness, queerness, fatness and femme-ness is the norm.

Terrell’s eye-catching, visually stunning works range from still photography in both series and stand-alone images to a video of Dion getting ready. In one set of photographs, Documentation of Dion Being a Bad Bitch, two Archival Inkjet prints are displayed side by side. The images, filled with glittering gold, emulate Terrell’s intended aesthetic of “queer opulence” and creates a visual world in which Dion is the center. The first image shows the elaborate set up and work that went into creating the image, while the second shows the payoff, with Dion embodying confidence and beauty.

Nayda Col­lazo-Llorens is a Kalamazoo-based interdisciplinary artist working with multiple media, from installations to digital works and traditional paper/canvas-based works. The Stamps Gallery suggests her work “exam­ines the way in which we per­ceive and process infor­ma­tion, deal­ing with con­cepts of nav­i­ga­tion, mem­ory, lan­guage, hyper­con­nec­tiv­ity and noise through her inter­dis­ci­pli­nary cre­ative prac­tice.”

Similarly, Collazo-Llorens' gallery wall text for Rupturing says she uses her practice to “examine concepts of navigation, displacement, memory, and language.” Collazo-Llorens continues to discuss her complex digital works, which are created with “collected materials such as text, sounds, and printed matter”, which she says “are essential elements in my installation works.”

These site-specific installations are created with the specific gallery in mind and are meant to be navigated based on the exhibition space’s layout. Her installation for the Envision exhibit is “a three-channel animated video installation that incorporates non-objective marks, collected sounds, and dislocated text to speak about fractured systems and leftover detritus. It explores themes of collapse, disruption, and potential transformation.”

Car­ole Har­ris is a fiber artist based in Detroit. The Stamps Gallery states she is “a fiber artist who extends the bound­aries of tra­di­tional quilt­ing by explor­ing other forms of stitch­ery, irreg­u­lar shapes, tex­tiles, mate­ri­als, and objects.” Her work for the exhibit, Marked by Time, is dominated not only by textile works but “layers of ephemera,” including a reconstruction of the artist’s studio wall. In other works, Harris combines paper with fabric in mixed media works such as 2019’s Rivulet, made from cloth with Joomchi paper. Time as a theme is repeated throughout the space, not only marked by visual rhythm, but also with the inclusion of works throughout Harris’s career, from the early years to 2021.

Kylie Lock­wood is an artist living in Hamtramck. She frequently works with photography and sculptural forms. Stamps Gallery describes her as “an inter­dis­ci­pli­nary artist whose work rec­on­ciles the expe­ri­ence of liv­ing in a female body with the his­tory of sculp­ture.” In previous works, Lockwood has made plaster casts of her own body to interrogate the history of sculpture. In Facsimile, her work for Envision, Lockwood uses replicas to question the masculinist history of classical sculpture. In her gallery wall text she asks, “What is the affect of a reproduction? What are the emotions, forces, sensations that exist between the form of one copy and another?”

In asking these questions, Lockwood sets the stage for her exploration of classical sculpture through a specific reproduction on loan from the Simone DeSousa Gallery. This language also alludes to her use of her own pregnant body, which is a central visual element to the work. She goes on, “In this exhibition, I convene with a museum replica of Michelangelo’s Pietà. I use my pregnant body to blur the boundaries between myself and a sculpture, interior and exterior, subject and object, the torso of one mother with the head of another.” Lockwood presents two series of photographs in which she poses her pregnant body with the replica head, which also hangs on the wall of the Stamps Gallery.

The title of Facsimile is derived from text on the Pietà replica. In a gallery label, Lockwood explains that the replica also has a label filled with helpful information such as “THIS FACIMILE [sic] COPY is authorized by the Vatican Museums. It is produced under the supervision of the Reproduction Studio of the Metropolitan Museum of Art from direct impression molds of the original sculpture developed by the Department of Scientific Research of the Vatican Museums.” The direct language fails to mention, as the artist points out, that “this head exists because the original sculpture suffered trauma.” The sculpture was broken, notably, in a way that damaged the female figure. Lockwood also gleaned another interesting connection from the Vatican replica, which she explains, “The inscription states that this copy was made in 1982, the very same year the artist (who placed this head here on this wall) was conceived. 39 Years later this copy of a 522-year-old sculpture of a mother is held by the pregnant artist. Together they explore the idea of what the affect of a reproduction could be.”

The inaugural Envisions exhibit offers up a diverse range of art and artists who are currently living and working in Michigan. The first of hopefully many more, the first exhibition’s final result is impressive and exciting for audiences and artists alike.

After its display at the Stamps Gallery through January 22, 2022, the exhibition will travel to galleries around Michigan, including the Crooked Tree Art Cen­ter in Tra­verse City.