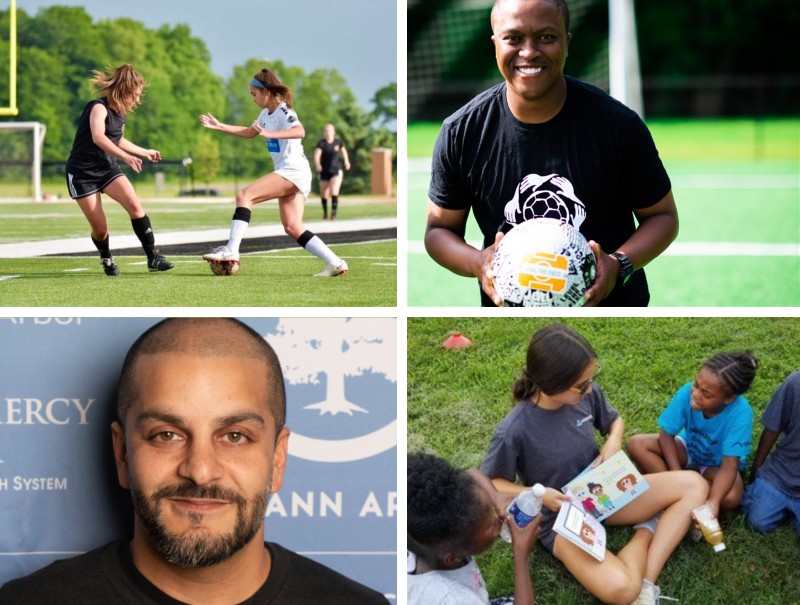 The soccer club canceled its 2020 and 2021 seasons for both the men's and women's teams because of the pandemic. But AFC Ann Arbor upped its community outreach programs, and Eitzman was a frequent participant in those events, which included The Mighty Oak Project and Community Kicks—both of which promote equity and access in society and the sport—as well as various educational, food distribution, and anti-police-brutality initiatives.

"I have done a lot with The Mighty Oak Project and Community Kicks over the years, Eitzman said. "I am a Community [Kicks] coach, and during the beginning of the pandemic, while unable to coach in-person, I created soccer training videos to encourage kids to stay active from their own homes.

"The Mighty Oak Project went above and beyond in making impacts throughout these difficult times," she said. "These are only some of the many things we have done, and I am so grateful for being a part of these incredible groups and cannot wait to see what else we accomplish."

Eitzman also spent much of last summer coaching kids throughout Michigan as well as distributing books and soccer balls to Bishop Elementary students.

AFC and Washtenaw My Brother's Keeper also co-founded the CLR Academy, which creates opportunities for local youth through sports, education, and nutrition. The free program met every Saturday during the summer of 2021 and taught kids the fundamentals of soccer, basketball, and football, provided free books, and offered high schoolers the chance to serve as coaches. In addition to these tenets, CLR taught the value of social confidence, positive friendships, team skills, and literacy.

“Soccer is different from other sports," said Bilal Saeed, the chair of AFC Ann Arbor, which began with a men's team in 2016. "It is communal. Nothing else in the world connects people in a global way the way soccer does."

Until the pandemic, AFC was doing community good works about 25% of the time and playing the game 75% of the time, Saeed said: “But when COVID hit, we flipped the numbers and eventually made it 100% of community service. We listened to what the community needed, be that food insecurity or educational needs.”

Eitzman got involved with the AFC Ann Arbor because of her childhood coach, Boyzzz Khumalo. Originally from South Africa, Khumalo moved to the United States in 1996. After college, he became involved in recreational sports management and played semi-pro and pro soccer before working as a coach; he was promoted to head coach of AFC Ann Arbor's women's team when it began in 2019. “I was Emily’s coach when she was about 11,” Khumalo said. “When we started the women’s league, I asked her to be involved.”

Diversity, equity, and inclusion are core values of AFC, Saeed said: “Emily is biracial, Boyzzz is from South Africa, my parents are immigrants from Pakistan … we live diversity in our club. We consider ourselves the Anti Racist Soccer Club—we try to live these values." 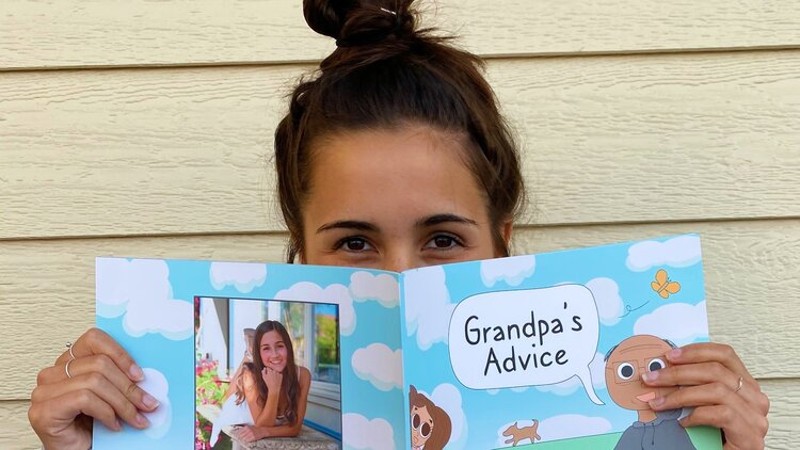 During the pandemic, Eitzman also published her first kids’ book, Grandpa’s Advice, which shares the story of a young girl and her grandfather while teaching readers to practice gratitude, seize the day, and take advantage of every moment. The values of hard work and kindness are reinforced throughout the tale.

Eitzman said her love for writing was sparked in elementary school when she wrote books as part of her class. While a student at U-M, Eitzman joined a group called OptiMize that provides students the chance to develop projects and ideas for social impact, and the OpitMize Social Innovation Challenge offers a community, mentorships, workshops, and the chance to pitch for up to $10,000 to fund a project.

As Eitzman moved through the program and learned how to write books, she realized that there was a lack of diverse representation in the industry: “So, I wrote my own book highlighting my own interracial family," she said. "I wrote the book that I never saw as a kid.”

While the shutdown was hard on AFC Ann Arbor, it survived and is ready for the 2022 season. Both the men's and women's teams announced their 2022 schedules recently, and both sides have been elevated to the USL 2 league. The teams begin playing on May 7, with the men on AFC's home field at Concordia University versus Oakland and the women traveling to Flint.

A return to the soccer pitch is a welcome update for a soccer organization that never stopped working to better their teams or their community.

“People like Emily and Boyzzz constantly motivate me," Saeed said. "They are so involved in the community; they keep me going. I haven’t met many people—of any age—like Emily, who use actions instead of words. This club is very lucky to have them.”

Eitzman’s book is available on her website, raisinggoodpeople.org. More information about AFC can be found at afcannarbor.com.