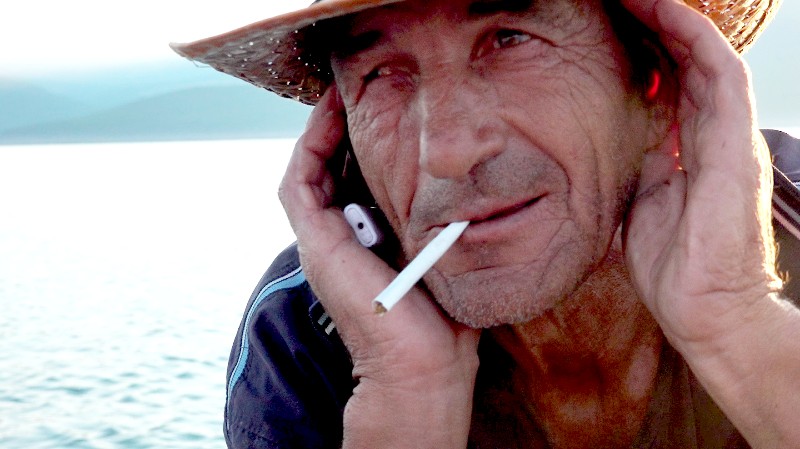 Like a window into their lives that is only open for a short time before its shutters close, we peer in, knowing only that the two share something humble and kind.

There’s something so incredibly immersive about this film. The raw footage from Pavlović’s camera captures the jerky swings of his body while walking, the arc of his arm as he changes his attention, the slightly out-of-focus images that make it into the final cut. Dogs approach him, conversations hesitate and falter, nothing is staged or reenacted. You always feel like you are right there, bound by something you can’t put your finger on. Is it companionship? Sorrow? Wisdom?

The language barrier between the two also makes this strangely compelling and real. Anyone who has strained to understand another language, hesitant to either admit their ignorance or risk ire by asking someone to repeat their statement again, will understand the constant underlying stress of living in a language that they do not wholly possess.

This movie is not about war, but partway through watching it, I realized it could not be ignored. Zdravko states several times that he lost his youth in the war and that everyone is changed by it. Soldiers could shoot an enemy as easily as taking a drink. He prays to God to never send anyone to war again.

But war has returned to Europe nonetheless.

By the movie’s end, Zdravko has returned to his island church to live alone with dubious health and an uncertain future. The beautiful life “kao bubreg u loju” may never come again for him.

"Looking for Horses" will screen in competition at the Ann Arbor Film Festival on March 24 at 5 pm at the Michigan Theater, or online starting March 22 at 6 p.m. Tickets are available here. Visit aafilmfest.org for the full schedule (March 22-27).