Friday Five: The many guises of Laurence Bond Miller and Ben Miller 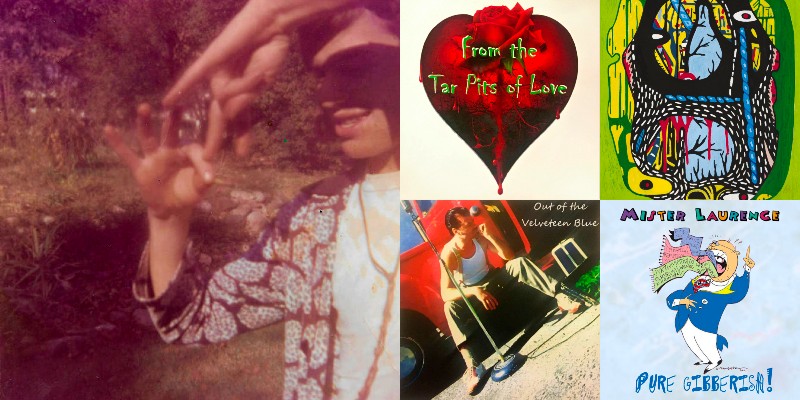 This week features the Miller brothers with a heavy focus on Laurence, who has been making music in the Ann Arbor-Ypsilanti area for nearly 53 years, ever since he and his brothers, Roger (Mission of Burma) and Benjamin, formed Spronton Layer in 1968 while at Ann Arbor High School (Pioneer).

The brothers are such a prolific creative forces—in the past and in the present—that we also did an all-Millers Friday Five back in December 2021, which you can read here.

There's always a steady stream of new and archival releases by the Millers, and the recordings below span new wave, children's music, lounge, experimental, pop, rock—and everything in between.

Laurence Bond Miller, The Musical Life of L.B.M. (Vol. 1-5)
This five-volume series came out in Janaury 2022 and features a mix of music from Laurence's 50-year career and interviews about the particular songs and bands, coordinated by Nina Price, aka DJ Ann Arbor, for her radio show. You get a little bit of everything, from the late 1960s psychedelic Spronton Layer days, his time with 1970s proto-punk band Destroy All Monsters, his 1980s new-wave / power-pop years as The Empty Set as well as the cabaret punk of Larynx Zillion, the 1990s comedic lounge acts Mezzanine and Velveteen Blue, and several more groups up to the present day. If you're unfamiliar with Miller's varied musical output, this collection is the perfect introduction.

Laurence Bond Miller and the Love Maniacs, From the Tar Pits of Love
This band was formed in 2017 so Miller could get back into playing clubs and events with a mixture of covers and originals. The group went into Ann Arbor's Big Sky Records in January 2020 and made From the Tar Pits of Love in three days, with overdubs added later at home. These 16 tracks touch on everything from honky tonk and country to Beatles-esque pop, roots rock, and the spikier side of new wave.

Velveteen Blue, Out of the Velveteen Blue
Mezzanine was a band Miller formed as the opening act for another one of his personas, Laryx Zillion, and the two shared a similar style of ironic zaniness. But where Laryx Zillion's Novelty shop worked as a campy prog-new wave act, Mezzanine was a send-up of the neo-retro lounge scene in the early to mid-'90s. That band didn't last long and quickly morphed into the similarly situated Velveteen Blue, and this record is a collection of previously unfinished tracks that Miller polished off himself after that group ended. Out of the Velveteen Blue isn't all loungey—some of it recalls Miller's new waviest and roots rockin' material—but it is all campy.

The Mister Laurence Experience, various albums
It's no surprise that Miller eventually explored children's music since many of his groups excelled in the sort of over-the-top personas and ultra-catchy silliness that defines so many kids bands and tunes. There are a number of albums and live videos on Mister Laurence's Bandcamp and YouTube pages for you and your li'l ones to explore.
.

Benjamin Miller, In the Moment
While Laurence has certainly played in many avant-garde acts—including Empool with twin Benjamin—his brothers, including Roger, have tended to stay in the experimental and post-punk lanes. In the Moment is Benjamin's brand new album of mostly instrumental, mostly improvised multiphonic guitar—basically, a treated and modified instrument that he uses more like a paintbrush than a stringed instrument. As he writes in the liner notes to this LP, "When creating spontaneous sound with this instrument in particular, I view the process more as a visual artist than a musician; thinking in terms of texture and shape rather than melody and chords."