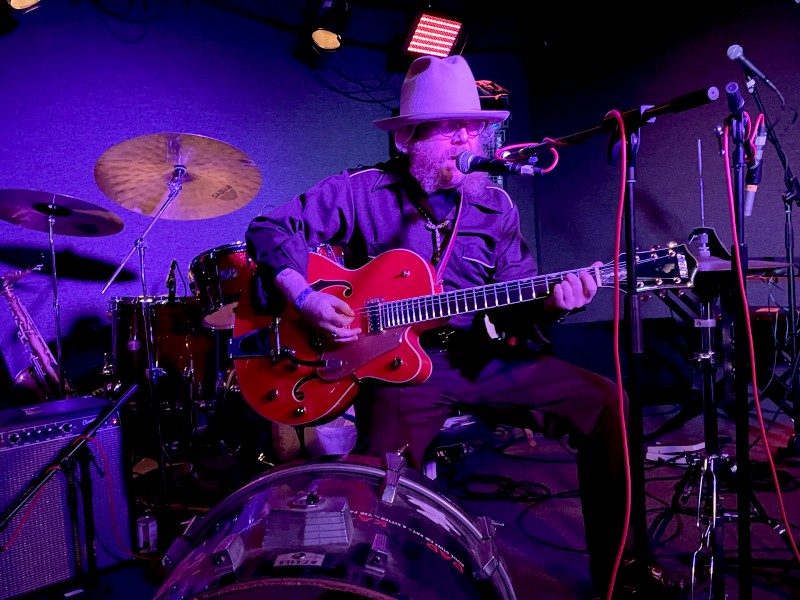 The Chelsea alt-country singer-songwriter and multi-instrumentalist shares his vulnerable experiences with addiction, loss, and heartbreak on his latest insightful album via Ann Arbor's Ravine Records.

“It’s been some pretty heavy-duty times, and with my whole recovery the last four years," said Karate, aka Fredric Scott Leeman, who works at Washtenaw County’s Community Mental Health. "I’ve reflected a lot on past relationships and things like that."

Karate started reflecting on those relationships and experiences in January 2018 when he received treatment at a local rehabilitation center and resided in transitional housing for 15 months. At the time, he saw several friends get kicked out, then relapse, and later pass away.

“With my own experiences and how they worked out, I had to see this [trauma] … you couldn’t not see this living with these people. It was kinda the point,” Karate said. “Even if it wasn’t that, I felt like I was on this boat, and if you got on this side or that side of the boat, everybody fell off … so you had to stay in the middle of the boat. It’s so tricky, it’s not just kids having fun anymore, none of it is.”

Despite his challenges and losses, Karate relied on playing guitar to heal. After moving into transitional housing, a Brian Setzer signature Gretsch electric guitar entered his life.

With a Gretsch in hand and the addition of newfound friendships, Karate felt inspired to write the 11 thoughtful tracks that would become Always Honey. The 31-minute album features vintage Americana, rockabilly, and honky-tonk sensibilities fused with honest lyrics and live instrumentation.

“We were right down the road from that skate park in Ann Arbor, so here we are in our 40s, and we’re all getting skateboards, riding BMX bikes, and getting in trouble for playing our amps too loud in the apartment … it was great,” said Karate, who has previously played in the Plumbobs, Scotch Bonnet, and Awesome Color.

Throughout Always Honey, Karate reflects on past struggles with a fresh perspective and keeps a watchful eye toward the future. His earnest title track brings welcome closure after coming to terms with a previous relationship and a lingering sense of heartache.

“Well, I was imagining people singing that song alone in their car,” he said. “One day a few years ago, I was riding down Michigan Avenue in Ypsilanti, and I saw her outside of the Red Rock smoking a cigarette. It was obvious she didn’t see me, and I stopped, and I wanted to go back, but I didn’t. Instead, I wrote that song.”

After leaving that painful “Always Honey” relationship behind, Karate recalls the cherished connection with a late friend on the solemn rockabilly tribute ballad “Lil B.”

A warm sense of gratitude fills listeners’ ears as he sings:

My mother only had one son
In my family, I was the youngest one
Then I met a funny guy
Who just loved everyone
And it was almost like having a little brother

“That song is actually about living in transitional housing, and I would come home and see J.P. He was this little dude, and he was younger, but he looked up to us. They’d be playing that Call of Duty game with recording studio monitors, and so it was really loud, all the gunfire,” said Karate, who was born in Norman, Oklahoma, but moved to Chelsea at age 10.

“He’d be in there, and he’d say, ‘Can I play one more?’ And I couldn’t say no to him, no one could say ‘no’ to this kid. Here was a younger kid there with us, but he did relapse, OD, and pass away. That was during the pandemic that he passed.” 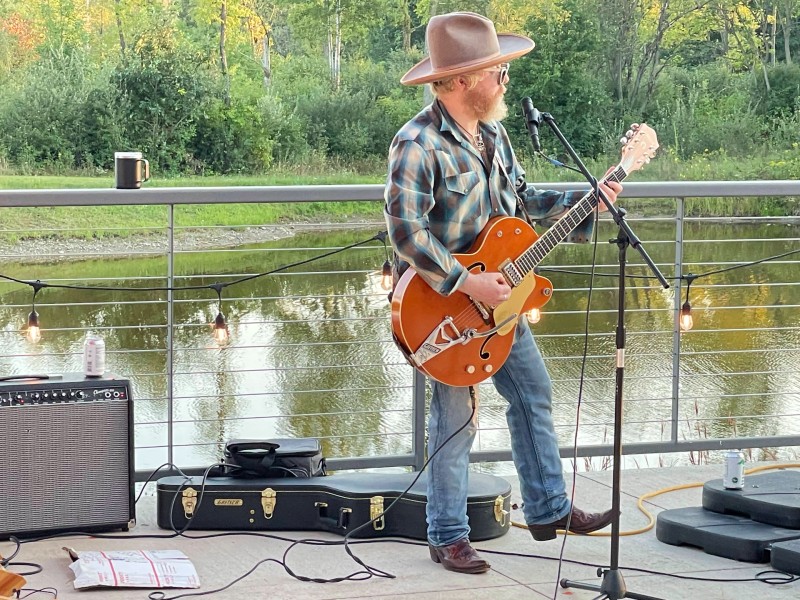 While grieving the loss of his “Lil B” friend, Karate also searches for sense of purpose on the wistful acoustic anthem “Gone It.” Surrounded by glistening acoustic guitar and proggy Moog synth, he sings, “The sun is going out / And I should get rolling on / But I don’t know where I belong.”

“I’m talking about the sun going down and no longer existing," Karate said. "And people, in the last couple of years, were talking about these giant ships on the other side of the sun harnessing energy. I was imagining what that would sound like. It was the combination of the acoustic guitar in this perfectly sounded wooden room with the Moog and the lyrics.”

Alongside Karate’s refreshing Always Honey originals, he includes a tender rockabilly rendition of The Righteous Brothers’ 1965 smash “Unchained Melody,” which was written by Alex North and Hy Zaret.

Pensive electric guitar and delicate drums back Karate’s heartfelt sentiment as he sings:

“The original is so complicated, and I started messing around with it. I was like, ‘Can I make a more rockabilly version?’ And then I started playing it on my baritone guitar, and I was like, ‘OK, I think I can do this,’ and a couple of people said, ‘Yeah, I really like that.’ I thought it was something that my mom could appreciate because it was her music,” said Karate, whose mother passed away in 2021.

“The main thing about that song for me was Elvis Presley’s last performance when he does it. My cousin, who I started the Plumbobs with, the first time we saw the Elvis version of that … there’s a part where Elvis looks at his buddy holding the microphone, and he gives him this weird look, and my cousin said, ‘I think Elvis knew he was gonna die.’”

“Sometimes, when you just have a few instruments you can make them more powerful. I thought that it would be good for Darrin to use his skills on something more stripped-down,” Karate said. “We spent some time on this, and we had never worked together before. We shared a lot of really close friends, but we were both in our own worlds. When those two worlds eclipsed, this was the product.”

Karate is also working with James on his next album, which will feature some of James’ bandmates and include a mostly live sound. He’s tentatively planning for a fall or winter release.

“The other day, we were recording, it was Saturday afternoon. On the way there, I think we had all, in our separate cars, listened to The Down Home Show on WCBN,” said Karate, who will perform May 21 at Chelsea’s Ugly Dog Distillery.

“And I said, ‘OK, we’re not in Texas, we’re in Ann Arbor. The Down Home Show has been going on for as long as I can remember. Let’s summon all of that in here now, and we did. I was like, ‘Damn, that’s how I like to feel on a Saturday. Drinking some RoosRoast, playing some honky-tonk, and making the sun shine.’”