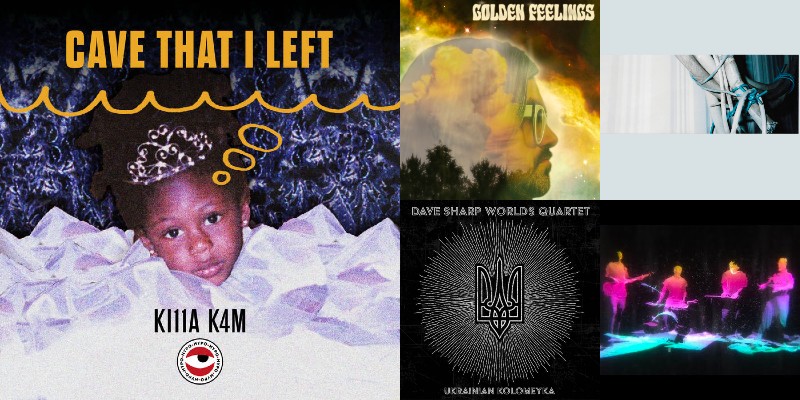 Killa Kam, The Cave That I Left
Took me a minute to realize that Ann Arbor rapper Killa Kam is the artist formerly known as A.N.G.E.L.I., who first paired with The Cave That I Left producer Scary Steve in 2020 for a terrific one-off single and video, "They Take IV." This full-length collaboration between the dynamic duo born Kamryn Thomas and Steve Klingbiel is equally great. Thomas has the unique ability to sound laidback even while delivering speedy raps, and her wordplay is clever and catchy while touching on raw emotions and funny moments. Klingbiel's beats and sounds pull from experimental dance and independent hip-hop, so the tunes are never locked into a rigid boom-bap. That means Thomas has to work extra hard to make her words fit the music so well, and she's more than up for the task. The Cave That I Left is killer, Kam.

Dave Sharp Worlds Quartet, "Ukrainian Kolomeyka"
I've never asked Ann Arbor bassist and bandleader Dave Sharp why his band is named Worlds, plural, rather than World, singular, but I also haven't ever needed to: the answer is right there in the music. Whether exploring Kenyan folk music, Armenian religious music, or as is the case here, a Ukrainian kolomeyka, which is a folk-dance number from the country's Hutsul ethnic group, the high-level musicians in the Dave Sharp Worlds Quartet travel every avenue of the sonic universe. The band has played this joyful tune in its live sets for a while, but this studio version was recorded so that sales could be donated to the Ukrainian Red Cross.

Fred Thomas, Those Days Are Dust, Dream Erosion Pt. II
In September 2020, Ypslanti's Fred Thomas released the instrumental album Dream Erosion (Synthesizer Songs), which was mostly written and recorded at home between May and August—true pandemic-inspired music. And because the pandemic keeps getting sequels, you gotta have a soundtrack for the new variants, so now comes Those Days Are Dust, Dream Erosion Pt. II. The first single is the Altered Images-evoking "Unfit"—it made me think of an instrumental companion to that band's "I Could Be Happy." That's all I've heard so far from Those Days Are Dust, which comes out June 3, but I'm projecting meaning from my own pandemic-related weariness onto song titles such as "Crisis Days cont.," "January Redux," and "Repeating." While Thomas self-released the first album on his Life Like label, volume two comes courtesy of Ann Arbor's Dagoretti Records, which is issuing it on CD and LP.

Golden Feelings, Golden Feelings
Dustin Krcatovich's label Impermanent briefly lived up to its name when it went into hibernation in 2018 following a 16-month run of releasing six experimental recordings by "friends and family." But the Ypsilanti sound artist has revived Impermanent for the debut album by his own Golden Feelings project, which is all about meditation music. The full album is out on CD, cassette, and streaming on June 3, but you can luxuriate in the first single, "Body Betrayal," now as you prepare your inner being for the record release show on Saturday, May 28, at Dreamland Theater in Ypsilanti.

Saajtak, "Concertmate 680"
The latest single from Saajtak's new album, For the Makers, is accompanied by a trippy video that equals the off-kilter sounds. The woozy "Concertmate 680" is built upon an unmistable pre-set sound from the Radio Shack keyboard the song is named after. Saajtak makes art-pop in the spirit of Pram, Moonshake, Laika, and—one name you might not have to Google—the more avant-garde side of Stereolab. The band calls Southeast Michigan (and Brooklyn) home, but the instrumentalists in Saajtak have strong ties to Washtenaw County.