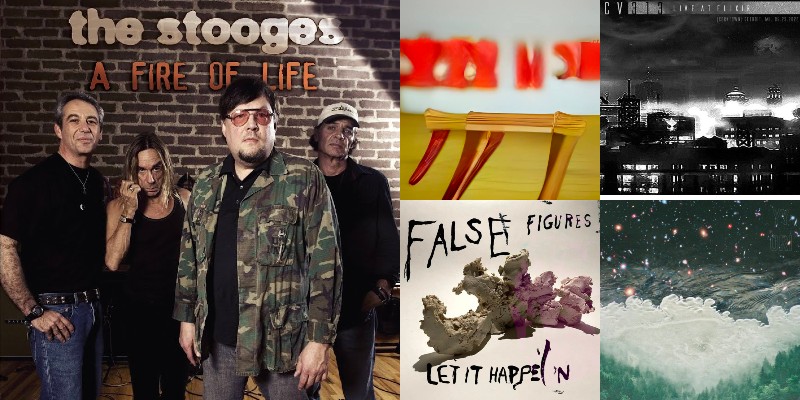 This week features live music and demos by The Stooges circa 2003-2007, dub techno by cv313 and YY Ori, rustic Americana by False Figures, and modern classical courtesy of Alex Blanpied.

The Stooges, A Fire of Life, Theatre of Cruelty, and other upcoming releases
Iggy Pop, Ron Asheton, and Scott Asheton reunited in 2003 for a few songs on the Iggy solo album Skull Ring and in 2007 they made The Weirdness LP as The Stooges. While none of those recordings will be reached for before at least a half-dozen other previous Stooges and Pop records, those tunes do have their fans and those folks at the targeted audience for the new odds and sods collection A Fire of Life. The U.K. label Easy Action—named after the 1970 Alice Cooper album—compiled this double CD/LP featuring live recordings from a Stooges' 2003 show in New Orleans and one in 2007 from Sydney, Australia, as well as demos of some Wilderness tracks and a stripped-down 2003 Newbury Comics in-store where Scott Asheton bashed a cardboard box instead of his drums. Ron Asheton played guitar throughout this era, and former Minutemen and fIREHOSE bassist Mike Watt was on bass.

Easy Action also has a limited edition four-CD boxset planned that features live recordings from four concerts by The Stooges in 1973, including three that have never been released. Everything on Theatre of Cruelty is sourced from cassette recordings, so the sound quality might be iffy. But if you enjoyed Third Man's rough-and-ready Stooges holy-grail release Live at Goose Lake, August 8th, 1970, you'll probably want to hear this collection as well—especially the rare show that featured keyboardist Bob Sheff, better known as Blue Gene Tyranny.

Easy Action's Carlton Sandercock is also overseeing a photo-heavy Stooges book, and the label recently put out a double 7-inch of Iggy and the Stooges songs from 1972 sessions in London.

In fact, Easy Action and Sandercock are so dedicated to Iggy & Co. that they might be the only ones able to actually create that fabled Stooges Wax Museum on Hill Street in Ann Arbor.

cv313, live at elixir [corktown, detroit, mi] 05.29.22
Echospace is a long-running Detroit-Chicago-Ann Arbor label that has been reissuing its massive back catalog on Bandcamp over the past few years while continuing to offer new music, too. There's a ton of great stuff over there, and one of the most recent fab releases is by cv313—aka Echospace label co-leader Stephen Hitchell—recorded during the Elixer showcase at this year's Movement festival in Detroit. Over the course of two-plus hours, cv313 blends vinyl, digital remixes, and new music into a sonic smoothie that's rich with the flavors of analog dub techno. Highly recommended if you're a fan of Germany's Basic Channel label.

YY Ori, Fugue Year
This is the third album and fourth overall release by Ann Arbor electronica producer YY Ori. Fugue Year delves into digital dub-techno with a sound that is a little bit dancey, a little bit headphone-y, and a lotta bit good. Released on the Michigan-based Caffeine Free label.

False Figures, Let It Happen
Jim Cherewick (vocals, guitar, etc.) and Joel Parkkila (vocals, guitar, etc.) are the songwriting heart of Ypsilanti's rustic Americana collective False Figures, along with Jason Lymangrover (bass, guitar, keyboard). But just as the band did for its 2018 self-titled debut and the 2019 follow-up, Flat, the main Figures are joined by several pals on the six-song Let It Happen to help them lightly flesh out their stripped-down songs, including Colin Moorhouse (guitar), Davey McLeod (cello), and Brandon O'Day (sax). The music is loose, the recording is intimate, and the songs are terrific. Fans of Will Oldham (Palace, Bonnie "Prince" Billy, etc.) will find much to love about Let It Happen.

Alex Blanpied, Quips, "Ousu Doue/Ik-Ik Imi," "Cambria," "Four Poems - Wonderland," and "Four Poems - Rain"
University of Michigan student Alex Blanpied is a composer, oboist, and pianist whose knowledge of classical music far surpasses my dabbling in the widescreen genre, so I recommend you click on each of the releases below to read his thoughts about these pieces as well as learn the names of the many talented players and ensembles who helped him bring these works to life. Much of the music leans toward contemporary classical, but it's not steeped in post-tonal sounds, either. Blanpied deftly plays with harmony, color, and tone in atypical but still accessible ways.