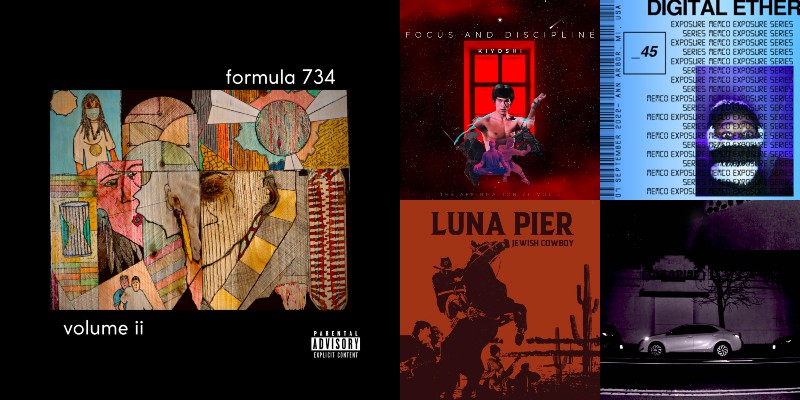 This week features hip-hop from Formula 734, Kiyoshi, and Digital Ether, country by Luna Pier, and bedroom hip-hop-pop by Cashmere + Casia.

Formula 734, Volume II
Formula 734 is a terrific Washtenaw County community project that partners men of color from various age groups to create music together. My Brother's Keeper's Jamal Bufford (aka rapper Buff1) is the shepherd for Formula 734, and the collective's first comp of hip-hop recordings came out in June 2020 as the pandemic was raging. This second volume's timing should give the artists involved with these 10 songs plenty of performance opportunities—the album-release show was even held recently at the Washtenaw County Courthouse at the invite of the RE:CLAIM art project happening there. There's a documentary about Formula 734 coming out in a few months, but you can read a bit more about Bufford & Co. in this 2020 article by Pulp's Lori Stratton as you listen to Volume II.

Cashmere + Casia, Intake
Cashmere (Washington) and Casia (Levine) are Washtenaw County ex-pats musicians who teamed up for the breezy Intake EP. I know Cashmere as an indie-emo-leaning shoegazer, but the seven songs here play with rap, R&B, and the sort of quirky, lo-fi indie that Casia often features in their own music, which has also been released as Isaac Levine, The Platonic Boyfriends, and numerous other projects. The duo also recorded a conversation in a Los Angeles park about their work.

Kiyoshi, "Focus and Discipline"
Another ex-Washtenaw County artist, Kiyoshi, released a banger last month called "I Am Elevated," and the former Ann Arbor rapper follows that jam with this buzzing single. Kiyoshi rat-a-tats clever wordplay at a breathtaking pace that only comes from years of practice, focus, and discipline.

Luna Pier, "Jewish Cowboy"
This Ann Arbor indie-emo quartet, which takes its name from the tiny Michigan town on Lake Erie near the Ohio border, had previously released the punkish "On Nails" single as its studio debut (as well as a lo-fi live video version recorded at The Blind Pig). But a February article on Luna Pier in The Michigan Daily mentions the band was already exploring the surprising sounds featured on the band's new single: "Between an array of punk-inspired originals, the group interlaced elements of indie-rock and even country into their repertoire. The song 'Jewish Cowboy' proved to be a highlight, mixing twangy instrumentals and zany storytelling over harmonica accompaniment from Kaufmann." Where "On Nails" is earnest and passionate, "Jewish Cowboy" goes for humor and camp. Whiplash!

Digital Ether, Exposure Mix 045
Now that UMich is back in session, the Michigan Electronic Music Collective (MEMCO) started up its always rewarding mix series again as well as its monthly DJ night, Impulse, which is at The Blind Pig on Saturday, September 24. Where most of the Exposure mixes are uptempo techno-house party starters, Digital Ether focuses on downtempo hip/trip-hop and spooky atmospherics.