No One Thing Without the Other: Dave Douglas Quintet at Kerrytown Concert House 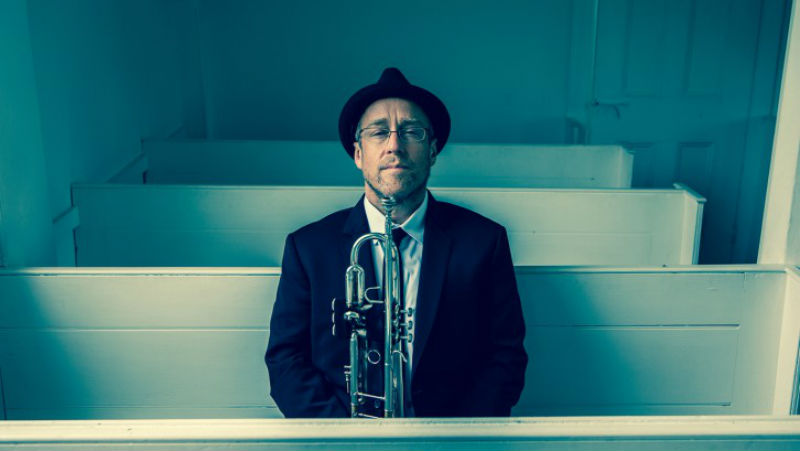 Hymns from him: Dave Douglas.

Trumpeter Dave Douglas prepared to play his mom’s funeral by arranging the hand-picked hymns and Bible verses she wrote down on a scrap of paper and gave to him.

“I didn’t do too much to them,” Douglas said, whose jazz can edge toward the avant-garde at times. “I thought these are pretty straight-ahead renditions of these hymns.”

Douglas’ Brass Ecstasy band -- with the New Orleans-type front line of trumpet, French horn, trombone, and tuba, plus drums -- was the group he picked to play his mother’s chosen hymns at the funeral, with the sung verses handled by the church’s congregation.

“We got to the service and we go through the first chorus,” Douglas said, “and I turned around to hand it to the congregation and they’re all just looking at me like, ‘Whaaat?’ It was way over their heads. We had to totally adapt and have the [church’s] organ player come help out.”

He laughs about the event now, but that was a tumultuous period for Douglas.

During his mother’s illness, Douglas’ longtime quintet was having difficulty finding time to work together because the individual players had become busy band leaders themselves. Then his mother died of cancer and, within a few years, so did his 55-year-old brother.

But Douglas used the stress to fuel his creativity.

“I was struggling about how to play these hymns; I knew them from my childhood, but I hadn’t played them in years,” he said. “So, a new zone of composition was taking shape in my mind while I was also thinking about forming this new quintet. And it just sort of happened at the same time.”

Around this same time, Douglas said, “I was commissioned to write a piece to be played at the World Trade Center memorial site that I called ‘Brazen Heart’ and was written for a large brass ensemble. It was the same time as my brother was diagnosed, and I was also writing the rest of the music for that quintet album," also called Brazen Heart (2015). "And as this piece came together, I said, ‘Well, this is a brass piece, but I’m going to have to rearrange it for the quintet.’ It’s an important piece in our book.”

That means the new quintet’s first three studio albums all contained memorial works. But Douglas knew from the start he had the right musicians to interpret his emotional compositions.

“It’s a really magical group,” Douglas said. “In late 2015, I did the Brazen Heart Live at Jazz Standard recordings because we had a book that was comprised of all three albums and everybody had them committed to memory. So, I think when a band memorizes a large book of music, magical things start to happen, so we documented it that way. The band that’s coming to Ann Arbor is the exact same personnel from those projects.”

When this “magical group” plays Kerrytown Concert House on Thursday, February 16, attendees will get to hear one of the best working bands in jazz, with the quintet format being one of Douglas’ favorite lineups.

“In the same way a classical composer might say a string quartet is their home main base, I sort of feel like the quintet -- trumpet, tenor sax, piano, bass, and drums -- is my home territory,” Douglas said. “There’s no real logic -- I never made a decision. I actually tried to make a quintet with alto sax once and I just couldn’t.”

Douglas credits his love for the five-person format to what he listened to in his youth.

“I think it’s just formative listening,” he said. “As a kid, I heard the quintets of Eric Dolphy and Booker Little, or Joe Henderson and Woody Shaw, or Lee Konitz and Warne Marsh, Art Blakey and the Jazz Messengers, and, of course, the great Miles Davis quintet. That just feels like home to me, and out of all my works I’ve probably written more quintet pieces than anything else.”

But Douglas is also known for helming a huge number of projects, from other working bands to one-off collaborations. One of the trumpeter’s most recent groups is High Risk, an electro-jazz quartet featuring electric bassist Jonathan Maron, drummer Mark Guiliana, and Ann Arbor’s own Shigeto on electronics.

“We met originally at an improvised music concert,” Douglas said of Shigeto, who is supposed to drop by the Kerrytown gig. “It was one of those round-robin improvising situations, so we ended up on stage playing a five-minute duo piece. He played mostly drums -- then he got on the machines. But he’s an improviser in a way a lot of electronic music producers kind of aren’t -- and that comes because he was originally a drummer.”

Douglas has worked in the electric-jazz world before. He had his trumpet hooked up to all sorts of effects in the late ’80s as a member of the proggy Doctor Nerve, but once Douglas started finding his own voice on the instrument, he ditched the pedals. “I found in my own playing I was starting to adapt the sounds within my own acoustic vocabulary as an instrumentalist,” he said. “I started to mimic the things the pedals were doing.”

But Douglas returned to the plugged-in world with the live album Sanctuary (1997) and the Pro Tools-assisted Freak In (2003) as well as Witness (2001), which featured Ikue Mori adding electronic textures to the nonet’s already large sound, and Keystone (2005), an album composed to accompany the silent films of comedian Roscoe “Fatty” Arbuckle.

“Every new electric project I do,” Douglas said, “the technology has changed so much. I have to reimagine how I approach the recording and playing process. What’s interesting for me is always how can we make this the most flexible, spontaneous, improvised situation but also use the technology to its highest exposition.”

“It’s still challenging,” Douglas said about adding electronics to an improvising band. “And one of the things I admire most about Shigeto is how he musically handles it. In the band High Risk, we’re going in and out of grids [programmed parts], and players might have some click tracks even in the live shows, but even despite that, the tempos can fluctuate. I do put a lot of thought in advance about how we get in and out of the grid and how we’re going to adapt to each other.”

Now, High Risk can work off the grid because the players have internalized the music, no longer needing click tracks, Douglas said, which allows “for quick changes of tempo and fluctuations that happen by people listening to each other, and that’s what the crux of improvised music really is.”

Though Douglas is a prolific composer, it’s easy to forget improvisation is at the heart of everything he does. That’s why in many ways a band like High Risk is no different from Douglas’ acoustic quintet, or Brass Ecstasy, or Tiny Bell Trio, his early trumpet-guitar-drum ensemble -- they're all vehicles for improvisation. While the original compositions emanate from Douglas, he makes sure they highlight the strengths of his bandmates.

“What I see crucial to my writing, and jazz more generally, is that the composer is creating a platform for the musicians’ personalities to shine,” he said. “I come across musicians who inspire me. Having the musicians in my ear helps guide me to finishing the pieces; no piece moves ahead without the other.”

From mom’s hymns to a “new zone of composition” to the current quintet to High Risk, no one thing moves ahead without the other.