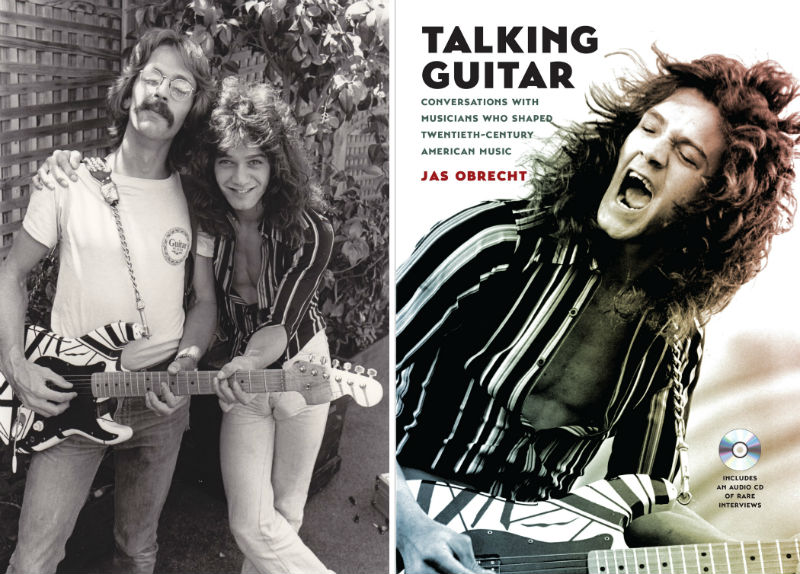 Jas Obrecht and some guy in Van Halen.

Obrecht was sent by Guitar Player magazine to a music festival to interview Canadian rock guitarist Pat Travers, who, flanked by two young women while snorting cocaine off a mirror in his dressing room, sent Obrecht away. Obrecht stumbled upon a basketball hoop and ball, and after a few minutes of taking shots, a wiry young guy approached and asked to play.

“The story tells students that if you’re passionate about a subject, no matter what it is, there’s a good chance that others share that passion, and if you know the fundamentals of good writing, you can get paid to write about your own experiences, or about a subject you love,” said Obrecht, who’s also written for Rolling Stone, among other publications. “I did it with music, but you can do it with other things, too, like travel or history.”

Obrecht grew up in Detroit and received a guitar from his parents on his 13th birthday.

“I loved it right away,” Obrecht said. “It was wonderful. I learned that I could play myself in and out of moods, and I started writing a few songs.”

During his teen years, Obrecht played in a band, but he quickly learned that that wasn’t his path. “I don’t like performing,” said Obrecht. “I’ve played guitar for 50 years now, but I’d rather write than perform.”

What did turn his head as a teenager, though, was a concert by blues legend John Lee Hooker at his Jesuit high school. The performance mesmerized Obrecht, and Hooker later became not only one of the musicians that Obrecht interviewed most, but also one of the writer’s heroes.

“John was probably my all-time favorite,” said Obrecht. “I interviewed John maybe six or eight times, for lots of different magazines. It was like being in the presence of a really wise man. He couldn’t read or write, but boy, was he sharp.” 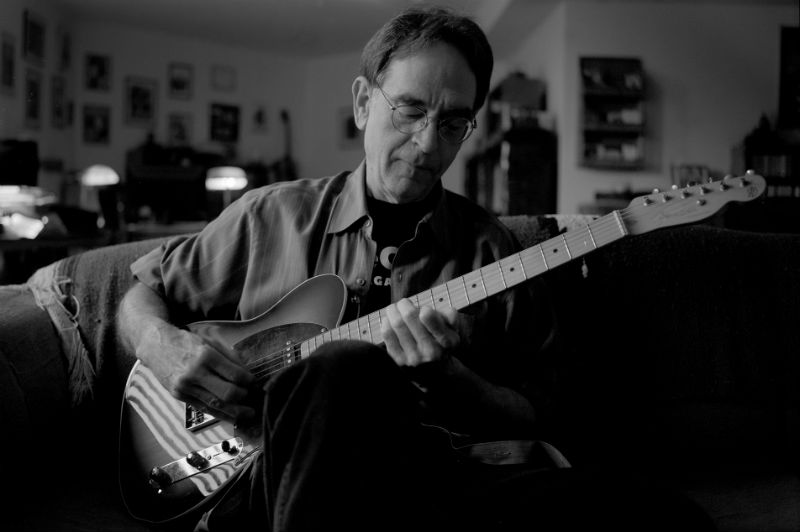 Jas Obrecht has great stories at his fingertips from a lifetime of talking with master guitarists. Photo by Saroyan Humphrey.

Obrecht started writing about music while working as an assistant editor at Gale, a Michigan-based publishing company, “and we’d get magazines from around the world,” said Obrecht. “So I’d spend my lunch break reading Living Blues, and Rolling Stone, and Guitar Player. One day, I just decided to send my resume to all of them, and my resume arrived at Guitar Player magazine’s office on the day they let one of their three editors go. They thought it was some divine sign. And two days later, I was hanging out with Jefferson Airplane.”

For Talking Guitar, Obrecht gathered 19 of his interviews with seminal blues and rock guitarists; the book comes with a CD packed with never-heard-before audio from some of Obrecht’s interviews. The book -- just released May 8 -- is already garnering positive attention, including Obrecht giving an interview to the National Public Radio show Here and Now.

“I wanted the musicians to tell the story of the guitar in the 20th century, and I started at the beginning, with the first guitar hero in history,” said Obrecht. “I talked to Nick Lucas … who became a huge star in 1922. … For years, if you went into the music store, they sold method books by Nick Lucas, and Nick Lucas guitar picks. He was really the first guy ever to enter people’s consciousness as a star guitar player.”

Inevitably, there are “ones that got away.” Obrecht’s unrealized wish list includes Bob Marley and Jimi Hendrix, and his almost-interview with Jimmy Page didn’t happen because the Led Zeppelin guitarist was so stoned he had to be carried out of the building.

Other musicians, meanwhile, did drugs while Obrecht was talking to them.

“It was not uncommon to see cocaine and marijuana usage at interviews,” said Obrecht. “Jerry Garcia must have done half a gram of coke during my interview with him. It would have killed me, but all it did was make him talk faster. He didn’t lose any mental faculties at all.”

Sometimes, having conversations with an artist would inspire Obrecht to have a new appreciation for that person’s music. “I was not a big Tom Petty fan before I was sent to interview him,” said Obrecht. “But the moment I met him, I instantly liked him.”

But of the hundreds of interviews Obrecht has conducted over the course of his career, only one went completely south: George Thoroughgood.

“I was asking questions about his guitar playing, and he said, ‘This is boring,’” said Obrecht. “I said, ‘OK, what do you want to talk about? This is for a guitar magazine,’ and he said, ‘Baseball.’ That was the only time I walked away feeling like, (this person) didn’t put any effort into this at all. So I just transcribed it exactly and let him get blasted by readers.”

Now, though, as professional music journalism struggles to survive the digital age, Obrecht still believes in the value of hearing insights from rock and blues guitarists.

“I think that the people whose music has endured are important not just for their music, but for their thoughts and observations and beliefs on spirituality, and their take on other musicians,” said Obrecht. “When I went into the (editor) job at Guitar Player magazine, I got access to anyone I wanted, and that played into what became my mission,” said Obrecht. “I see myself not as a critic, but a musicologist, like Alan and John Lomax in the '30s and '40s, or John Work, who interviewed African-American musicians during World War II. I worked more like that than someone who writes snarky reviews for Rolling Stone. I’m interested in artists talking about creativity, and I approach each person as their greatest fan might. I always think, ‘If I was the world’s biggest fan of this person, what questions would I want answered?’ Readers want that.”