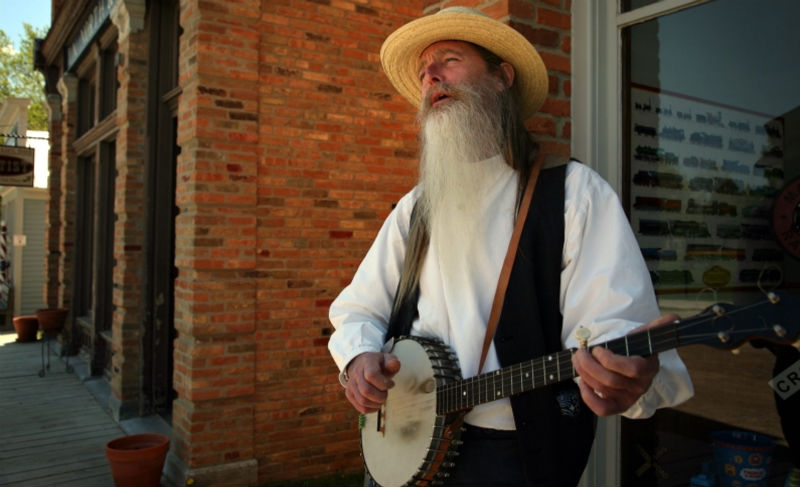 Michigan's Troubadour will make a stop at The Ark on Sunday, June 11, at 7:30 pm. And, no, Michigan’s Troubadour is not a fanciful title, it’s Neil Woodward’s official designation, given to him several years ago by the Legislature of the State of Michigan in recognition of his more than four decades of presenting concerts of songs and stories of Michigan and the Great Lakes States in countless settings throughout the Midwest.

Woodward’s show at The Ark will celebrate the release of his 10th recording, My Huckleberry Friends. Woodward has long been the unofficial artist in residence at Flint’s Crossroads Village, a 19th-century historical town, and the songs on this CD celebrate the Village and one of its highlights, the Huckleberry Railroad. I asked him to tell us about his life in music, about this recording, and about the concert at The Ark.

Q: You play eight instruments on this CD; 10 if you count your voice and your foot tapping: guitar, fiddle, banjo, mandolin, mandola, harp, spoons, and washboard. What was your first instrument and what got you started? Was your family musical?
A: The first instrument I took seriously was harmonica at age 6, but I recall wearing out a Mickey Mouse ukulele that had a hand-cranked music box playing "m-i-c-k-e-y-m-o-u-s-e" over and over. My fascination for strings included wrecking my dad's mandolin whenever I could locate it. It seems he had to hide it from my inability to not play with it. I also spent many hours holding down keys on my mother's piano while pressing my ear against the wooden parts to listen for the tone as it receded. My family always sang, my dad was the song leader. In church, my family always sang four-part harmony really loud.

Q: When did you start playing in public, and when did you first play at Crossroads Village? How many days have you spent there over the years?
A: The first song I can remember working up for performance was in first grade: "Cindy, Cindy" taught to me by Miss Shirley Stewart. About a year after starting cornet and trumpet -- first chair in the orchestra and marching band was home -- my brother gave me his first guitar. Folk music and rock 'n' roll took over my life. The first job I had after high school was actually playing folk music at Greenfield Village, but it seemed like there was more glory and money in rock and roll.

I was invited to play at Crossroads summer 1985. I had been playing pubs and festivals in Flint but had never seen Crossroads Village. The fellow with the squeeze box on the My Huckleberry Friends CD cover, Dr. Howard Weaver, was the first person I met at Crossroads. He admonished my performance on my very first tune, informing me that since W.C. Handy did not compose "St. Louis Blues" until 1903, and since Crossroads Village was 1870s, we would have none of that modern music!

We used to play seven days a week, and the season used to be longer. One reason I wanted to play here is I could play five hours a day. From my experience, traveling performers never have enough actual playing time compared to the effort spent on getting there. I'm not sure I have run into too many people that take this approach! It must be over well 3,000 -- probably more like 4,000 -- days performing at Crossroads by now. Yikes!

Q: Have you always been drawn to Michigan songs and stories, or did that interest develop gradually?
A: My parents made sure we heard the Detroit Symphony Orchestra, and I got a taste of how all the instruments work individually and collectively. I wondered why and how everyone knew certain songs, and where they came from. I listened to music on the radio, but never heard the beautiful songs my mother sang while working around the house. I wanted to know all those songs. I began to learn the stories of the people, the times, the history of this music that was clearly ours to share.

Recordings from Library of Congress and Folkways were not easy to find, and much of what I heard of American music was from the South. I knew there was folk music in Michigan but had no idea where to find it. Eventually, I realized it was everywhere! Who were those Gypsies with the huge guitars playing that hot, swinging music in that little bar on Michigan Avenue? Going to a ballgame at Tiger Stadium, what the heck were those sounds emanating from the Gaelic League in the next block? When bluegrass festivals got started in the early 1970s, I couldn't believe how great everyone played. The first mariachi band I heard just blew me away. Blues and jazz musicians in Detroit area were top notch, and it seemed the best of all styles of music were right outside my back gate.'

When I got work in the historical settings like Greenfield Village and Crossroads, I had opportunity and purpose to locate some of the Great Lakes music transcribed and recorded in the 1930s by such visionaries as Earl Clifton Beck, Ivan Walton, and Alan Lomax. Traveling around performing, I study the area I'm playing and try to include stories and music from that location. I'm not sure I would have studied Finnish accordion music if not for having a gig in the Western UP where folks still revere Viola Turpienen, "The Finnish American Princess." I keep an ear open for stories from folks that hear me play. Often a piece I present leads to someone wanting to share their personal connection to the song and its the local variations.

Q: You have a big repertoire of traditional songs and tunes, but your original songs also manage to sound like traditional ones. How do you go about writing songs?
A: Telling stories with songs is what I do. To transport a listener to a former time, the musically historical setting seems to make sense to me. This means I have to learn the music that players and singers knew in the time and place described in the song. When I can find a song contemporary with a story or event, I use it. If I want to keep a story alive, but cannot find a song, I may write one.

A specific example is "The Ride to Beat Death," on this CD. This is the story of Ferris Metry's demise and Owosso's well-respected parish priest, Father Diane's mission of mercy, absolution, and salvation. Our Huckleberry Railroad conductor, Harry, handed me a brittle and yellowed newspaper with this story and said, "Neil, you might want to write a song about this." The headline from the Courier Herald, Durand, Michigan, 3 October 1901 read, "A RIDE TO BEAT DEATH.": “Owosso Priest Was Carried 13 Miles In Ten Minutes On Light Engine To The Side Of A Dying Man.” The lyrics are pretty much in the newspaper article, straight from the words of Father Diane. Early in my writing process, I decided to use a traditional melody that would allude not only to the time period of the story but also to the original song, "Nearer My God to Thee."

Q: The blurb about you on The Ark’s website starts out, “Neil Woodward may be the only person alive who played both banjo at the Rock and Roll Hall of Fame and Jew’s harp at Lincoln Center.” Tell us about those, please.
A: In 1988, Peter Glazer and Jeff Waxman brought their New York cast and work-in-progress theater piece Woody Guthrie's American Song to Detroit's Attic Theater for the premier production. The Attic was tasked with finding a bassist and a utility string player, who needed to play harmonica, fiddle, mandolin, and banjo. They tell me that all the leads they had in their search pointed in my direction, and it was a great fit indeed.

The bassist was Ray McKinney, a legendary figure in jazz. McKinney's Cotton Pickers was a seminal force in the early years of jazz, and Ray was one of the original beboppers with Charley Parker, Dizzy Gillespie, and Miles Davis. We played that show with the original cast in Ford's Theatre -- the ghost of Lincoln looming over our bandstand -- and theaters in Kansas City, Seattle, Manalapan (Florida), and Albany (New York) among other places. The cast recording lists me as one of the creators of the play and the music.

Among many honors and all those nights of singing Woody's songs, we were invited to play for Woody's induction into the Rock and Roll Hall of Fame. It is an odd experience to hear one's own recordings playing over the house sound system upon walking into the building for the first time, but truly an honor. So I played banjo there.

Also had a chance to sit in on fiddle with Jorma Kaukonen and others at The Odeon. Our company was also part of the concert at Severance Hall with Pete Seeger, Arlo Guthrie, Ramblin' Jack Elliot, Bruce Springsteen, and others. We also presented a one-time performance at Lincoln Center. By that time, a jews harp solo was part of the arrangement of "Jolly Banker." Made a lot of friends and went a lot of places with that project!

Q: A number of friends and fellow musicians will join you at The Ark. You’ve worked solo many, many times, but clearly you enjoy making music with friends. Tell us about that.
A: My old pal Gary Weisenburg is playing upright bass with me. I invited friends that have subbed for me over the years at Crossroads: Wanda Degan, Betsy Beckerman, Kitty Donohoe and Sheila Graziano. Also a few of my students that grew up there and have played with me at The Ark over the years.

Playing as a soloist is part of the troubadour's tradition of traveling light. Playing solo tends to shed a featured light on the songs and the stories; much of the edifice is stripped from the obscuring cloak of additional instrumentation. But I love playing with people!